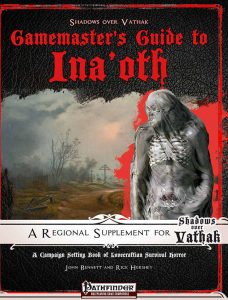 This GM’s Guide to the region of Ina’oth clocks in at 62 pages, 1 page front cover, 1 page editorial, 1 page ToC, 1 page SRD, leaving us with a massive 58 pages of content, so let’s take a look!

First things first: While this does not require the Player’s Guide to Ina’oth, it is interesting to note that there is no overlap between them per se – the two guides have been crafted to complement each other, which is a big plus as far as I’m concerned. Instead of getting an unredacted version of the Player’s Guide, we get basically a massive amount of new material and a glimpse behind the curtain. In short, this is a great example of how Player’s/GM’s Guides should be employed.

Okay, structurally, we begin with a piece of introductory prose, presented as a letter, including a proper visual representation of said missive. Aesthetically, that much is certain from the get-go, we have a distinct and nice book here – the grimoires-style layout (with stains and splotches) makes this an aesthetically-pleasing experience to read, complemented by plenty of flavor-wise perfect full-color artworks; while some obvious have been taken from the public domain, they have been recolored or modified…or chosen perfectly to seamlessly generate a unified aesthetic as far as artwork is concerned. The original pieces I saw are, no surprise there for Fat Goblin Games, really, really nice.

But what about the content? Well, this guide begins with the usual introductory notes and some advice for the GM that is important to bear in mind – Vathak as a setting is conductive to a variety of different horror types, and selecting properly the themes to convey is important. Anyways, after this, we receive a brief history of the region, with the amazing banner added as a pleasing visual identity. We thus learn of the golden age long gone, far from the grip of the dreaded old ones and vampire lords, but we also learn of the bitter wars that ravaged the land, of the Plague of Shadows and worse – Ina’oth, at least to me, has a very distinct Masque of the Red Death vibe, with disease as a leitmotif.

Next up, we take a tour of the settlements of Ina’oth, and here, we get not only juicy and evocative angles, we actually also get full settlement statblocks for these places…and if that should not suffice for you, then rest assured that that the massive 50-entry-strong table of random settlement hooks should inspire you. Why are a settlement’s sole inhabitants children? Why does a crazed old couple attempt to fling excrement at the PCs, calling them plaguebearers? The table is excellent and absolutely inspiring.

Speaking of inspiring: We go through the lands of Ina’oth and sport something that should be considered to be required for pretty much all games: We get DCs for knowledge the PCs might have on the area, yes, but instead of just getting the success…we also get massive amounts of information for FAILED checks. This is a simple operation, yes, but it adds to the element of uncertainty required by good horror. (Suffice to say, the GM should roll such checks.) Beyond that, PCs that do their legwork may unearth even more information, adding yet another level to this section. This is tremendously useful and takes the need to redact and compartmentalize information off the GM’s shoulders. I adore this. Please continue doing this!

Anyways, if all that technical stuff regarding immediate usefulness does not inetrest you, well then I still have excellent news. You see, Ina’oth’s regions are written in the most inspiring way I’ve seen since the old 3.X Ravenloft Gazetteers, with a focus on immediate usefulness, rather than novel-like plots. In short, this book does a phenomenal job here! Now, this level of quality also extends to the movers and shakers of the region, providing detailed, fluff-centric write-ups for the powerful beings f the region…and for, for example, the dreaded Stick Man, an impossibly gaunt man shrouded in black, with a wide-brimmed hat…From the locales to the persons, a palpable sense of the horrific, a knowledge of what works, suffuses this supplement. This, unsurprisingly, also extends to the fluff-only write-ups of the potent organizations that can be found in the region: Dedicants of Miasma, who arose during the Plague of Shadows, are often surgeons and the like, struck by visions of horrible winds felling men and plagues alike – here, we have the belief of the old concept of miasma, aptly translated into what may or may not actually grant power. Knights of the Blackened Sun seek to harness the power of the One True God and the vampiric lords at the same time, making for a ruthless and philosophically interesting knightly order, while the people of ash believe that they were killed in a past life and may attain knowledge and learn how to escape what they perceive as the cycle of reincarnation.  No, this is, by far not everything, and I remained rather brief here, because I do believe that this should be read in its entirety to properly work.

The book also explains, in details, the realities of life in the region and also has a whole section devoted to festivals and local traditions, which adds tremendously to the sense of this being an actual region. Heck, we even get a fully-depicted prayer for the dead here!

Now, in the beginning, we already read about the book being cognizant of the different tropes associated with horror subgenres. If you, as the GM, are not 100% sure, though, well, there is an extensive selection of adventure hooks provided for Gothic Horror, Survival Horror or Cosmic Horror, grouped by theme. I love this.  The next section becomes crunchier and provides something that, once again, should imho have been standard a long time ago: We are introduced to a variety of diseases, which come with multiple stages! This can mean that even Pathfinder’s liberal magics will be taxed more by curing them, and adds a level of tension here…particularly since the engine provided means that you can easily design further stages and tweak what’s here. The Plague of Shadows, for example, is presented as a 3-stage disease. Know what’s even cooler? We get a disease-template that you can employ to change things up and further codify and tweak these hazards!

The last big chapter is something most GMs will adore: With the region’s focus on ghouls and ghosts, the guide does not seek to needlessly reinvent the wheel. Instead of clogging your game with a ton of templates, it provides an extensive array of alternate monster features, with CR-modifications noted. Are you old-school and want a ghost that ages you? Ability’s here. Fancy some Ring-action? Drowning’s an option. What about ghosts that can hitch a ride on beings that defeat them, to rejuvenate next to their one-time vanquishers? (YOU FREED HER!!) Oh yes. What about…splitting and being there in multiple places at once? What if misplaced love of a lover makes a ghoul return as a corpse loved? Did I mention the table that sports 12 disturbing ghoul hobbies or 12 advice/services that could be gained from “friendly”/satiated ghouls?  We also get 12 mementos for them, and 12 sample quirky mannerisms – obviously with a focus on the odd and somewhat macabre.

The pdf closes with 2 monsters: The face taker, at CR 10, can compress itself and rip the faces off their victims, adding them to their horrid form. The CR 4 shroud mummy, then, would be one of the most interesting, at least theme-wise, variant mummies I know, sporting the ability to demoralize via their death imprints and to leech away the life of those caught in their shrouds.

Conclusion:
Editing and formatting are very good on both a formal and rules-language level. I noticed no serious issues. Layout adheres to an absolutely gorgeous 2-column standard that blends perfectly together with the artwork to create an aesthetically-pleasing whole. The pdf comes fully bookmarked for your convenience.

John Bennett provides a true gem here. The Gm’s Guide to Ina’oth focuses on being useful for the GM. While there is plenty of amazing lore to be found here, I was surprised by how actually USEFUL this book is – the hooks and angles, the details and settlements…this is basically both a great region sourcebook AND a great horror toolkit; even if you do not play in Vathak, this is worth every cent of its asking price. The prose and ideas are interesting and fun to read, further cementing Fat Goblin Games’ run of excellent Vathak-supplements. If you even remotely enjoy horror and if you are not adverse to having annoying stuff like signature abilities and settlement statblocks laid out for you, if you enjoy some nice dressing to go along with inspiration for both folks, places and organizations, then I can wholeheartedly recommend this.

As an additional aside: This *may* be a coincidence, but even if you do not play Pathfinder, the book’s structure and ideas, when seen as apart from the rules-components, still warrant getting this one in my book. If you like your games dark, then this will have something for you! My final verdict will clock in at 5 stars + seal of approval, given without the slightest sliver of a doubt!

Missed the equally impressive Player’s Guide? You can find that book here!