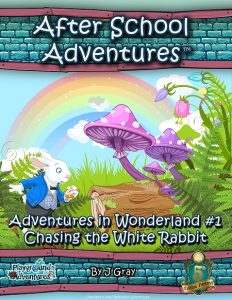 All right, still here? The module begins with the famous white rabbit popping up and who ever needed a chance to chase after the guy? Right! So, the PCs follow the fully statted, planeshifting and constantly teleporting white rabbit (whose statblock had a minor glitch that has since been rectified) into the dark green wood and here is where the module becomes its own minigame – you see, the map of the chase is basically a whole boardgame-style playing field. Each round, a character can move 6 squares, 4 if small on this playing fields. . (Alternatively, you can roll the dice for movement, which I’d actually recommend!)

The board has multiple challenge squares – stopping in one with a challenge helps you speed the process along. Magic challenges let you teleport to the next magic challenge field on a successful Spellcraft check, with failure sending them one square back. Save challenges are based on attribute-based saving throws, while shortcut and skill challenges are based on skill check rolls like Wisdom (Perception) or Dexterity (Acrobatics) etc. The first character at the final clearing receives a treasure, but also has to face the boss, the tangleme tree (challenge 1/2) alone for a whole turn before the other PCs catch up – in the tree’s embrace, the rabbit awaited – and a cake that should be eaten later already hints at the next adventure to come. On an aside – the tangleme tree’s build is actually more interesting than in the PFRPG-version, so kudos there!

If you want, btw., you can also enjoy the map of the chase  in a 6-page blown-up version that you can assemble and use minis with, for example. Should you be picky about the like – the lowest bottom parts of the map sport a relatively unobtrusive advertisement, but one you can easily cut off. In my test, none of the kiddos minded it, though.

J Gray’s first trip to Wonderland was very interesting for me. Why? Because, frankly, I wouldn’t have used the Alice-mythology. Having read so many treatises and twists on the subject matter, it’s hard for me to see the material with the same wide-eyed wonder I did as a child. Among all those gritty and dark revamps, taking the tropes and making them innocent is something I appreciated more than I thought I would. At the same time, you have to be aware that this module is neither particularly complex or unique in its mechanics – by design.

Why? Well, this is pretty much intended for players who have never played and RPG before. The challenges are pretty much simple “learn to roll X”-types of challenges that teach the basics pretty fast. The combat at the end etc. also are solid and fun, though perhaps not suitable challenges for kids that already have amassed some serious RPG-experience: If your kids have e.g. already completed a toned down AP made more child-friendly…then this won’t challenge them. If, however, you’re looking for a great gateway module that doesn’t demand too much and that, by virtue of its design, looks much like a familiar board-game, then this will do the trick better than any other module I’ve reviewed so far.

Even experienced groups can get something out of this, though; namely the fact that you can scavenge the chase and chase-board and increase the challenge. Personally, I think that makes it rather worthwhile. As for a final verdict: For me and my players, this was a good experience; not a stellar one, but a nice one. Unlike the first After School Adventure, it focused more on teaching playing mechanics rather than teaching; how you react to that pretty much depends on what you’ve been looking for. In the end, though, such a verdict would not be fair – this module tries to teach the truly young ones the game and does so in an appropriately non-threatening, fun manner with nary a chance for failure possible.

While this does not suit every table, particularly for bringing new kids into the game, this does a great job – and this is what its intention ultimately is. Hence, I will rate this according to its intended goal, which it achieves. For kids ages 4 -6, this is a neat introduction, in particular for the more sensitive ones that don’t already want to be Red Sonja or a similarly uncommon character due to their parents or elder siblings – for this, its intended audience, this certainly is a 5-star module. Older players and groups should take aforementioned caveats into account when getting this, but nonetheless, I’m looking forward to seeing how this mini-AP continues!

You can get this great beginner-friendly module for 5e here on OBS!