Rhûne: Into the Pale Tower

Rhûne: Into the Pale Tower 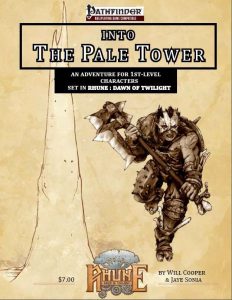 This module for the amazing Rhûne campaign setting clocks in at 67 pages, 1 page front cover, 1 page editorial, 1 page ToC, 1 page SRD, 1 page back cover, leaving us with a massive 62 pages of adventure, so let’s take a look!

All right, only GMs around? Great! We begin this adventure with the PCs attending the public viewing of Clan Hammerfall’s fabled hanging gardens -and they are gorgeously, lavishly mapped – see that drawing on the cover? It’s actually part of an overview map featured in this module. It should also be noted that there are faction missions herein, which may require subtlety to pull off – you can discard or implement them as you see fit, though, without losing much. Finally, before we get into the nit and grit of the plot, it should be noted that the module features “Making it Mythic”-sidebars – i.e., you can run this as a module for characters gaining their tier etc. Now personally, I’m a fan of really hardcore modules, so I did not elect to go that route, but I figured I may as well mention it.

One more thing: Whereas The Ælven Agenda provided a 1st level module for Rhûne’s anti-tech fractions, this one puts the characters within the context of the city-states of Vallinor, on the side of the technology advocates.

So, where was I? Oh yeah, hanging gardens. They’re lavishly mapped…like pretty much EVERYTHING herein. The amount of maps is really, really impressive…but annoyingly, you won’t find player-friendly versions of the gorgeous cartography – so while you *do* have the cool maps for everything, you, alas, also have the trap-icons on the maps…which meant that I had to, once again, draw maps. And my drawing skills suck. The absence of player-maps in a this thoroughly mapped module is baffling to me.

I know, the module…sorry. So, the PCs are gazing in amazement at the gorgeous hanging gardens (including alchemically potent berries!), when thugs disguised as anti-tech terrorists burst in…but those guys are just the distraction, as scuttlebombs try to drill into the superstructure, which means PCs will only have a brief window wherein they can herd innocents out of harm’s way and disarm the constructs -10 rounds. And yep, that’s the first encounter here! Now *that* is how you pull off a furious start! Oh, and guess what? Things don’t really slow down: When Vitkarr Kellak shows up, he is immediately targeted by a deadly assassination attempt by Grey Navash – and the chase (complete with isometric map and DETAILED tactics) makes for a great continuation of the module. At the same time (see page X for map references makes for a jarring and pretty obvious, if not crippling, formal blunder – one that is repeated multiple times throughout the module, alas) – whether by stopping the mythic killer or failing to do so, the PCs will secure documents, this ends Act I – which so far has been a nonstop-accumulation of pure awesomeness.

Now having quite possibly a rather good relationship with Clan Hammerfell, the PCs are invited to meet Narfin, a representation of the clan: Again, a jarring glitch in the read-aloud text omits the blank spaces in the first sentence for “Securityintheaftermath” -cosmetic yes, but in such a module, it sticks out. Similarly annoying: The letters that supposedly should be on the chase map…aren’t, even though the pdf says so. It is such hiccups that make this feel rushed.

After this debriefing (which is handled in exquisite detail), the PCs, either on their own or at the night-commander’s request, will find themselves at the northern side of Union City, in the Festung (German for fortress, just fyi) Nar – here, the PCs are hired to follow the trail of the mysterious assailants and deduce their agenda – onwards to Northgard it is – and here would also be the place to introduce faction missions, should you choose to do so. The journey via the White Jarl to the place may btw. be spiced up with a nice, fully detailed, mapped and depicted travel encounter…and at northgard, we have a rather intriguing settlement and a lot amiss: Here, the cast of important characters offers a variety of side-quests: There would be a mine with runebound miners, vermin and a potentially powerful witch in the making awaiting the PC’s ministrations. There would be a hill, where echoes of dread battles long past remain, attracting elemental spirits. Oh, and then there’d be the question of Hodur Blackshield, who has gone missing – the loner has become increasingly paranoid and littered the approach to his cabin with traps.

After reaching 2nd level and completing at least two of those side.missions, the PCs can finally meet Commander Drothgar, who is missing a rider from Fort Blitzkrieg (of course…*sigh*), aka Fort Bliss – the wilderness encounters (with read-aloud text and all) don’t foreshadow anything pleasant and indeed, the Fort has been abandoned and only traps and a crazed Black Hand agent remain – and all trails lead, sooner or later, to the eponymous Pale Tower: Even approaching this dread place can generate hallucinations, paranoia or worse…and beyond the traps and lethal foes, the PCs will find a rift between world, directly to Niflæheim, can be found…and the lost soldiers, now fel bloodragers and Malgrith, servant of the Lord of Long Winter, make for the final fight – but even if the PCs triumph here, Malgrith’s plans have brought a large host of barbarians here – when the PCs return, they find Northgard besieged and Commander Drothgar infected with the dread rage fever…and while the place still stands, the situation is dire…so the PCs return on board of the White Jarl…and further adventure looms on the horizon…

The pdf provides the stats for all new creatures featured herein, well-written hand-outs (though one is missing the GM-instruction section below) and a brief recap of the honor system.

Oh, and if you enjoyed this module – the arc continues in “The Rune of Hope”!

Editing and formatting are okay – in an adventure this well-made, the numerous “see page X”-remnants felt jarring to me, as did the glitches here and there. Layout adheres to a crisp and aesthetically-pleasing b/w-style standard with a sepia tint that extends to the copious GORGEOUS original artworks and maps. Oh, the maps. I have rarely wished for a module to have proper player maps this much. We get these amazing, detailed maps, with height-differences and everything on them…and then never get to use them because all frickin’ traps are on them! Because the assassin’s hiding place is noted in big, fat letters. URGH. Worse and just as glaring: This pdf actually has NO BOOKMARKS. None. I kid you not. It’s a HUGE comfort detriment and there, as per the writing of this, isn’t even a print version I could refer you to instead.

Will Cooper, Jaye Sonia and Joshua Kitchens have crafted a PHENOMENAL adventure. I absolutely adore this module. It is glorious, evocative and FUN. Fast-paced, laced in mythology, with a significant array of terrain-features, themes, diverse challenges – this is, if you just look at the module, masterclass and very, very cool. It does a great job showcasing Rhûne’s amazing aspects.

At the same time, this was an exercise in frustration for me – because I want to applaud the module, to praise it to the heavens…but can’t. The lack of bookmarks and player-friendly maps are two big, big strikes against it and if you add the editing hiccups, we arrive at a package that still is a great module…but one with wholly unnecessary flaws. And mind you, all of them can easily and quickly be resolved, which I honestly hope will happen. For plot, encounter, diversity, etc.-wise, this deserves my highest praises. If you can look past the formal imperfections, you are guaranteed to be exquisitely entertained by this massive adventure. If you can look past its blemishes, then this is 5-star + seal-level awesomeness par excellence. Now, I did already give The Ælven Agenda some leeway, so I can’t well do it again – and, in direct contrast, the lack of player-friendly maps hurts this module more than The Ælven Agenda.

I love this and it breaks my heart to do so, but considering all, I can’t rate this higher than 4 stars. Note, though, that this is still very much a highly recommended, amazing module – it’s just not nearly as GM-friendly as it’s supposed to be.

You can get this evocative module here on OBS!