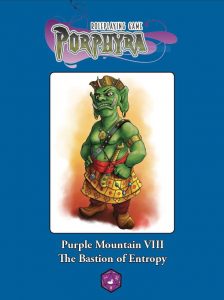 This installment of the Purple Mountain mega-dungeon clocks in at 49 pages, 1 page front cover, 1 page editorial, 2 pages of SRD, leaving us with 45 pages of content, so let’s take a look!

This was moved up in my reviewing queue…because I wanted to. You see, Purple Mountain started of solid enough, but with the third installment? It really amped up the awesomeness. Not a single level since then has disappointed me. The dungeon also is much friendlier to non-mega-dungeon campaigns than comparable supplements – due to the high-concept nature of the installments, it’s rather easy to pick this dungeon apart, and just insert the levels you’re intrigued by. Indeed, the series seems to have picked up on this – while nominally, you can run this as part of the mega-dungeon, you could just as well drop the bastion on the surface in your game. The module offers guidance for use in conjunction with the mega-dungeon, as well as for stand-alone use.

Now, as you can see above, this is the first installment of the series that is penned for Porphyra RPG, but since the system is designed to offer the GM the option to run PFRPG materials with minimal hassle, it works just as well for PFRPG 1st edition. As an aside: The themes of this module fit perfectly within e.g. the context of Planescape, the City of 7 Seraphs or similar settings – I’ll elaborate why below!

The module also does not require that you flip books or the like – while the adventure makes extensive use of the criminally-underrated Monsters of Porphyra-bestiaries, all stats are provided: Between monsters and NPCs, this amounts to more than 25 stats! The module also comes with 5 new magic items, a new drug, two new poisons, and a new spell – so let’s start with discussing these, shall? We can find a horn here, which may be used to call yaksha – and add specific yaksha to the wielder’s summon monster/nature’s ally lists! Awesome! (As an aside: Kudos for italicizing spell-references here!) This design paradigm is also represented by the cube of seven sides, which causes lesser confusion to onlookers – but also can be used to answer three questions per week…with a 1 in 6 (or 1 in 7, if you have a d7!)-chance of the answer being false. It is not mechanically interesting as an item, but its execution, how it works and how it’s described? Makes it work for me. It feels MAGICAL. The shackles of compliance are missing the bolding for Aura, slots, etc., but are a nice manacle item – they make the wearer more susceptible to being cowed by intimidation, and the wearer may be commanded thrice per day, with a pretty brutal DC. There is an amulet that provides protection from outsiders (protean) and helps versus chaos blasts and e.g. the instability curse of chaos beasts. The item reads “has the added bonus of reducing 46 the number of times one must make a saving throw against a chaos beast’s corporeal instability curse.” Okay, how? By how much?

Thankfully, this remains the only such instance of an item being problematic. The pdf also offers magical tokens that can be used as a currency for planar ally favors – which makes so much sense to me! The book also offers, as noted, a new drug – and it’s one that is worth including, for its benefits and drawbacks are well-weighed. The poisons include a simple one and a complex one – the complex one being bloodwine, which actually is a potent buff for e.g. vampires – nice! The new spell is an exotic one, chakra stimulation, which nets a +2 enhancement bonus to Charisma, but at the cost of 1 Intelligence damage. Sounds boring? Well, it only has a somatic gesture and may be cast as a swift action! I was pleasantly surprised by this section – I am usually pretty opposed to spell-in-a-can items, but this module does execute them in a way that adds twists and interesting aspects to them, elevating them from the default snorefest quality they usually have, and making them feel special.

The module can be considered to be an old-school adventure in the good way – it is a dangerous adventures that demands player attention, and offers more than combat – and in the grand tradition of these modules, there is a solid chance that careless players may end up in a pretty massive free for all battle. We get read-aloud text that e.g. takes listening at doors and the like into account.

Do you remember the old Planescape adventure from the “Well of the Worlds”-anthology, where the PCs deal with an illicit love-affair between a demon and devil? If so, you’ll probably share my sentiment that this was a cool idea that wasn’t executed too well. Well, guess what, this adventure is all about love in the outer planes – and in a way, it’s more scandalous! First of all, the massive introductory text/briefing of the group is HILARIOUSLY weird: We have two very regal and strange beings: One a fly-headed aristocrat, the other a lady…wait, a man…wait…yep, the second individual CONSTANTLY changes their appearance, gender, species, ethnicity…rather funny indeed. Both are agents for important outsider lords, know each other, and their banter suffusing the introduction put a wide smile on my face. As did the premise.

You see, an incubus and a bralani eloped – only to happen upon a yaksha (the pdf does have a one-page illustration of one type of yaksah, suitable as handout, and woven into the briefing), with this extra-planar ménage-à-trois eloping to the eponymous Bastion of Entropy – and the two outsiders? They decide that the PCs might be just the people to liberate the outsiders and return them to their partners.  The emissaries open a gate for the PCs to pass through – and bam, adventure!

Note how I mentioned that the adventure has a lot going on? What about the very first hazard, a coruscating gate, which can be defused by proper Perform checks – provided the PCs realize what the gate is – the check must be attempted at a specific time. Just saying that you roll won’t suffice! That’s good news, as far as I’m concerned. This design paradigm also btw. extends to how secret doors are handled. As for the yaksha here, we have sample yaksha names and treasures, allowing the GM to create a plausible illusion of custom creatures. The old-school mentality is also on expert display with puzzle-portals: There is, for example, one that requires a bit of experimentation, and while it is dangerous, it is not debilitating: Smart parties will be able to deduce how it can be stabilized pretty smoothly, and yes, it may also be brute-forced, though I consider this to be the less interesting option. The PCs can recruit an arbiter inevitable, and in a really cool angle, by helping it, the party will gain an in-game version of the player map! I LOVE this! More modules should account for parties doing their proper legwork! Ogdoad (Porphyra’s kind-of-Slaadi) are encountered – and there is one pretty badass scene, where a super-potent yaksha bmanifests and fights for 3 rounds, before retreating to maintain cosmic balance – still, 3 rounds? The PCs will have to survive that long… (Round to round tactical breakdown provided, fyi)

The PCs will also find a pentagram, with a ghostly hand extended from it, and 5 figures on the ring encircling it – this is represented, once more, as a one-page full-color artwork. It’s awesome. Know rock-paper-scissors? Well, the PCs get to play that against the hand, only cooler: Each of the entities (angel, wizard, demon, ghost, tree) all have their own signs. And yes, demon is obviously the metal-head’s greeting – forefinger and pinkie up; 2nd and 3rd down, held by thumb. If you are bested, though, you will pay the price – a unique effect is provided for each of the signs. I LOVE this mini-game. It is awesome and something we get to see all too rarely in adventures for complex games. Big kudos! The entropy-angle can btw. also result in PCs getting limited-use rod of wonder effects. Smart players might also wish to save the prisoners here – that will result in some chaos and soften the potent yaksha forces here…

And ultimately, the party will have to venture into a demiplane inside the fortress, maintained by an artifact, the cyst of life. Smart players track it down and quickly destroy it, instead of facing the very powerful and deadly yakshini yaksha – if they do, they’ll witness her being dragged to the decadent place of opulence of her master – with her paramours left sobbing behind. How the party treats these…well, that’ll be left up to them. Either way, they have curried favor with azata and demons alike – but made a powerful foe of the mighty yaksha!

Editing and formatting re very good on a formal and rules-language level; I noticed a few typos and the like, but nothing that hampers gameplay. Layout adheres to Purple Duck Games’ 2-column standard, with purple highlights. The pdf is easy to print, and the supplement features several neat full-color artworks, including two that act as essentially handouts. The module comes with full-color maps, and as noted, before, the player-friendly version can be attained in-game – awesome! Even better: The GM gets to decide whether the secret rooms are on the player map – or not – no deceptive “S”-indicators, no annoying numbers on it. I love that.

Perry Fehr’s crunch-design may not always be perfect, but his cultures and adventures? They are almost always pure AWESOME. The Bastion of Entropy plays actually better than it looks, and in many ways, its design-philosophy is more progressive and excellent than most ainstream offerings: It offers the tactical challenge we expect from games like Poprhyra RPG and Pathfinder, but also requires actual thinking. It BRIMS with creativity and is easily one of the coolest adventures I’ve seen this year. It does quote a Planescape classic without being a rehash, instead electing to go a different route. It is outrageous, at times funny, and does pretty much everything right: The complex is not linear, there are things to do beyond killing everything; smart players are rewarded, traps are not dumb “I walk across an invisible line and take damage/save or suck”, instead focusing on means for players to bypass them or handle them, combat is challenging… Regarding traps – there are invisible summon traps – but at this level, the party should have the means to detect them sans running into them, and the combat ensuing is part of the challenge, so there is no penalty.

In short, this adventure is meticulously-well DESIGNED. The fact that its themes make it perfect for e.g. the City of 7 Seraphs or Planescape adds a further plus to the impressive list it managed to accrue. Oh, and guess what? In all my years with PF1, I haven’t seen a module like it. This may well be the best adventure Perry Fehr has penned so far. If this is the level of quality we can expect from modules for Porphyra RPG, then we’re in for one awesome ride. 5 stars + seal of approval, and, because this hits so many of my own preferences so perfectly, this also gets a nomination for my Top Ten of 2019, in spite of a few typos. Highly recommended if you’re looking for a creative, challenging planar yarn!

You can get this amazing, planar-themed adventure here on OBS!

Missed Porphyra RPG? You can check it out here!

If my reviews help you find cool books (or steer clear of bad ones), please consider leaving a donation, or joining my patreon. Thank you.