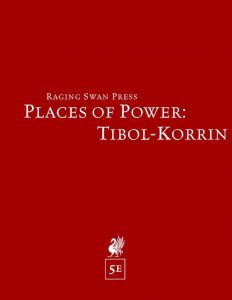 Now, as always, there are quite a few crunchy bits spliced into the description of this place. We get a brief section on local lore for PCs that do their legwork, notes on local dressing habits and nomenclature, as well as 6 different whispers and rumors for the PCs to unearth. The 5e-version sports a sensible marketplace of goods to purchase, properly adjusted for 5e’s realities. The pdf also provides some suggestions on how to best use this.

Now, if the big picture situation on its own were not interesting enough, the pdf also provides detailed fluff-only write-ups for the romantically-involved commanders that have bridged the gap between baronies, of sorts at least. There is more to note here. A mad hermit has his own cove here, and while indeed insane, he once was an extremely potent spellcaster, driven mad by apocalyptic visions. Nowadays, the hermit (who also gets a detailed write-up; at this point, it should be noted that 5e-references to default stats have been implemented in a concise manner) considers himself to be the guardian, someone to stem the tide of darkness to come. Indeed, a subtle chthonic leitmotif can be found here and there in the supplement. The keyed locations sport read-aloud text and adventure hooks, both of which are utterly inspired. For example, a local diver is paranoid about a discovery he made. Beneath the waves, there are two jade fortresses, mirroring those atop the sheer cliffs…but what’s their significance? That is excellence, right there.

Mike Welham’s name on a roleplaying supplement is a pretty good indicator that you’ll receive something that is AT LEAST good, quite probably excellent. Tibol-Korrin belongs firmly in the latter category. Beyond the already intriguing basic set-up, the book goes one step beyond, time and again. We have a personal level; we have the potential for horror, for tragedy, for war, for peace. This supplement manages to marry a sort of melancholia inherent in the geography and situation, with an after-war world-weariness that is sharply contrasted with the presence of clear peace-indicators and the joys of burgeoning love. We add a sprinkle of sword & sorcery, a dash of what may be a fairy tale or a gothic tale of woe and tragedy, and have a location that manages to serve a vast variety of functions in your game. It should be seen as testament to his talent that the author managed to construct this place in a way that makes it possible to employ all these disparate elements at once and even brew them into a concise whole, all without making the place feel disjointed or artificial. The 5e-version does not lose any of the small tidbits of crunch interspersed throughout the PFRPG-version, making it a detailed and worthwhile conversion.

In short, this is an absolutely inspiring, glorious supplement that oozes flavor from each word, an exercise in super storytelling. The conversion to 5e has been handled with care and attention to detail. My final verdict will clock in at 5 stars + seal of approval.

You can get this amazing place here on OBS!