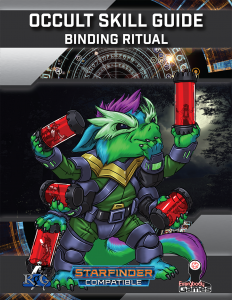 This installment of one of my favorite series for Starfinder clocks in at 19 pages, 1 page front cover, 1 page editorial, 2 pages of SRD, leaving us with 15 pages of content, so let’s take a look!

If that sounds complicated, it’s really not – if you’re familiar with PFRPG’s Incantations or Occult Ritual engines, you will be familiar with the basic premise of how these work. As all ritual-pdfs in the Occult Skill Guide series, you don’t need another book to use the material herein. Instead, the pdf not only concisely explains how rituals work in a step-by-step guide, it also comes with a detailed step-by-step guideline for the GM to create more rituals. And these rules are very tight. In fact, they are some of the smoothest I have seen, with ritual descriptors and component point budgets providing a framework for quick and easy ritual design based on a sensible framework: If your ritual has to do with [Meditation], Sense Motive and/or Perception are key skills; for [Liturgy] rituals Culture will be key; for rituals that have the [Routine] descriptor, we’ll use Computers. And you won’t have to calculate costs – or much at all. In fact, you’ll get to consult a massive table, and rock them out.

In this supplement, we deal with the level 5 rites of imprisonment, which is an abjuration [occult] ritual per default; in many ways, the ritual represents a staple of (science-) fantasy literature and games, where the adversary has some means of imprisoning the target, but oddly, such luxury is never really made available broadly or codified beyond some spells – this pdf changes that. The ritual requires 5 hours to perform, and requires a set of shackles/restraints that are forged from abysium, adamantine alloy, djezet, horacalum, inubrix, noqual and siccatite – which costs a massive 81K credits; furthermore, a tier 8 computer with range III upgrade costing 80100 credits is needed; reagents (here misspelled “regents” would be 12 candles made from thriae wax mixed with the targets blood, as well as two aeon stones.

The primary ritualist draws the seal around the creature, whereupon the candles are placed in equidistant positions akin to a clock’s hand-positions, whereupon the restraints are placed on the target, with the aeon stones phased into them to lock them; thereafter, the binding method is selected via magitech software, which brings a facsimile to life and imprisons the target. The binding methods allow for the target to be made an outcast, shunned by a species; the target may be chained, imprisoned in gems, vials, etc., entombed in a demiplane, confined to an area specified in a map, transformed into a figurine or illustration, set asleep…or, well, there are rules for combining them!

As always, we have a legend, as well two hooks for different uses of such a ritual.

Editing and formatting are excellent on a rules-language level; on a formal level, I noticed e.g. an instance of “regent” instead of “reagent,” but nothing serious beyond typos. Layout adheres to the series’ neat two-column full-color standard, and the pdf comes with quite a few nice full-color artworks. The pdf has no bookmarks, but doesn’t necessarily need them at this length (unless it’s your only ritual pdf, in which case that might be slightly annoying).

Alexander Augunas’ binding rituals fill a niche in the game that I really enjoyed – from the collector to the shunning of targets to further quests, these binding rituals allow for a variety of unique and cool angles. Perhaps the PCs have a Neegan-situation and just don’t want to kill a powerful adversary, instead opting for imprisonment? There you go – perfect angle for that. I love this ritual and its vast narrative potential. 5 stars + seal of approval.

You can get this impressive, evocative ritual here on OBS!