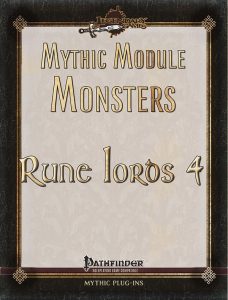 This inexpensive little pdf clocks in at 11 pages, 1 page front cover, 1 page editorial, 1 page SRD, leaving us with 8 pages of content, so let’s take a look!

What exactly is in here? Well, know how the AP-installment have a couple of monsters in the back? This book converts the beasts in the by now legendary AP-installment penned by Wolfgang Baur, to be more precise, the fourth Pathfinder installment ever, into mythic versions.

All right, we begin this installment of the Mythic Module Monsters-series with the CR 7/MR 3 take on the evocative concept of the Deathweb and it IS GLORIOUS – not only can it react to combat maneuvers with losing parts of their exoskeleton, a lethal infestation aura, rapid self-repair, the option to evade smaller creatures or emit spider swarm-infested webs. Absolutely the awesome critter the deathweb was supposed to be. Two thumbs up!

The CR 7/MR 3 version of the redcap is particularly possessive of his cap and lethal versus thieves of it and the mythic critter reacts to good-aligned holy symbols with rabid rage and the eponymous redcaps…well, more powerful as well.

The pdf also features an upgrade of the Runeslave-template, at CR +2/MR 1, does feature quite an array of nice tricks, including the catching of spells and the arcane decay essence being provided in a smart and evocative manner. That being said, I do feel that the template could have gone a step further in flexibility and means to depict these hulking super-soldiers.

The CR 9/MR 3 iteration of the legendary hound of Tindalos gains entropic shields when moving through angles and may use mythic power to exist in two spaces at once, manipulate probabilities and time itself and tear foes asunder with its ripping gazes.

At CR 15/MR 6, the Taiga Giant may add combat feats to the effects of boulders thrown on the run, poach abilities from the ancestor mystery and more unique tricks pertaining mastery of spears and the ancestor spirit-angle, making them more unique than the none-too-original base creature. The build also includes the mythic version of Hulking Hurler, reprinted here. The same CR/MR is featured for the shining child’ mythic version, whose burning light sticks to targets, blinds foes, may teleport around like crazy and gains a moderately powerful death throes ability.

At CR 12/MR, the mythic scanderig gets added fire damage and the spit slag is articularly difficult to escape. Here’s the cool thing, though: The corpulent fiend may roll itself into a wrecking ball form and truly smash asunder foes – unique and awesome and of so fitting!

Jason Nelson, Jim Groves, Tom Phillips, Alistair J. Rigg and Steven T. Helt’s take on the monsters from the fourth RotRL-installment was a surprise for me. Why? Because I actually really like what was done with a lot of these critters; the Deathweb is my star here, no doubt, and imho worth the fair price on its own. The other critters do not fall short either, though I was slightly disappointed at the top-class level by the shining child and runeslave, said disappointment only stems from the insane expectations I have for these critters at this point. This is a superb little pdf, well worth 5 stars.

You can get this evocative little pdf here on OBS!
Endzeitgeist out.