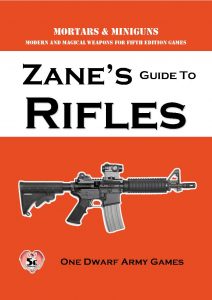 This pdf depicting rifles for 5e clocks in at 13 pages, 1 page front cover, 1 page foreword/editorial, 1 page SRD, 1 page almost blank (only a small part of a sentence is on it, so I’m counting it as blank), leaving us with 9 pages of content, so let’s take a look!

After a brief introduction, we begin with the general gun rules herein: Basically, on a natural 1 on an attack roll, a weapon jams and can’t be used until you spend an action to clear it. Guns as portrayed here have a rate of fire – a single shot is just that. A burst of fire consumes 3 rounds of ammo, but adds +1 damage die to the damage output of the weapon – 2d6 become 3d6, for example. This increased power, however, also means that the weapon can jam on a 1-2. Finally, there would be full auto fire, which allows you to target a single 10-ft. cube within long range: Every creature in the area must succeed a Dexterity saving throw (DC 8+ your Dexterity modifier, + proficiency bonus, if any) or suffer the weapon’s damage on a failed save, none on a successful save. Creatures beyond the normal range have advantage on the save, which mathematically and logic-wise makes sense. Saves in 5e are pretty swingy and advantage somewhat alleviates this. Auto fire consumes 10 rounds of ammo and most weapons cannot perform more than one such shot, even if you otherwise would be capable of attacking multiple times. Auto also can jam the weapon on a 1-3.

Additionally, every weapon has an ammo score, which denotes the number of pieces of ammo it can hold before requiring reloading, which consumes an action. Guns can prematurely be reloaded. The pricing for the ammo is pretty pricey, btw. – the least expensive bullets, for 5.56mm-guns, costs 60 gp per 50 bullets, which renders this ammunition significantly more expensive than e.g. crossbow bolts or arrows (1 gp net you 20 of those, in case you need a direct comparison). Bullets cannot be recovered after being fired, unlike other pieces of ammunition. Rifles are classified as martial ranged weapons, just fyi.

Okay, we begin with classic guns, with a total of 5 being depicted here – assault rifles would clock in at 2d6 damage, with a range of 150/600, 30 ammo and a hefty cost of 1K gp. Battle rifles are slightly more costly, have only a 20 ammo capacity and can only fire single shot or burst, no full auto…but do receive an extended range of 200/800. Both are Large, two-handed weapons…however, the battle rifle justifies its increased price with the ability to reroll one damage die for a better average damage output. Fifty Cals are single shot-only, inflict 2d8, only can fire single shots, sport an ammo capacity of 6 and have huge ranges (600/2400), require bracing (which means you suffer disadvantage on shots if you move prior to firing), also suffer disadvantage on shots within 10 ft and Strength scores less than 16 also inflict disadvantage on attack rolls. So, this would be up to three disadvantages…which leaves me with an obvious question: In this case…do they stack? Usually, they don’t, but it would kinda make sense here…and considering damage output, the option to reroll one damage die and the fact that it never suffers malfunctions make it rather powerful, in spite of not being able to execute more than 2 attacks per round and being a two-handed heavy weapon.

Marksman rifles deal 2d6, are single shot only, have a range of 300/1200 and ammo 10. They have stopping power (i.e. the damage die reroll) and suffer from disadvantage on attacks versus nearby targets akin to the 50 cal. Finally, the sniper rifle is single shot only with a range of 500/2000, 8 ammo and a base damage of 2d8. The weapon is two-handed, may not attack more than twice per round and imposes disadvantage on attacks versus nearby foes. The recoil requires Strength 14 to properly use and it needs to be braced… (again, leaving me with the same question as for the 50 Cal), but is reliable.

As in the first installment, it is this framework upon which the magical rifles are based – beyond the general scarcity qualification, the magical rifles sport a suggested, precise gold value, which is nice to see. So, what do we get? Well, Angry Zeus, for example, would inflict +1d6 lightning damage and on a 6 on this bonus damage, the target must make a Constitution saving throw or be stunned for 1d6 rounds, with creatures that have lightning resistance get advantage on the save…which seems kinda odd, considering the low bonus damage compared to spells. Anyways, the item leaves me with one crucial question: Can this bonus damage be rerolled via the battle rifle’s Stopping Power property? RAW it can be, which further exacerbates the power level of the rifle. Clarification here is required and, alas, this issue extends to all rifles with stopping power and bonus damage of a more esoteric sort.

Alas, this does not remain the only glitch in the engine: Take the legendary rifle Catalyst: Beyond being basically +2, being attuned to it inflicts +2d6 force damage, escalating the bonus damage in a pretty nasty way…that is not my issue, though: When an attack hits with a 17 – 20, you (or a creature within 50 ft.) either gain temporary hit points equal to the bonus damage inflicted or you inflict the force damage to another creature within 50 ft. of the target. Okay…do you need to see the target chosen? Why does the target receive no means to negate the damage? AC/advantage/etc. – all irrelevant. Same goes for the bonus damage caused by virulent pox, which oddly does not take immunity to diseases into account. Chain reaction, on the other hand, blows targets killed up in fireballs. Which generally is a cool visual. Alas, it is extremely prone to abuse: Just take a bunch of kittens, sedate them and put them in strategic positions. Start shooting them. Instant, reliable fireballs! Deadly Spree is similarly a bit wonky, increasing damage by +1d6 per kill for one round, though here the cost of ammo and shortlived nature of the bonus at least makes that strategy a sucky one. Some sort of restriction would be called for here. Charging Rhino may push those hit back, while Devastating Sapper has 4 charges that allow for the insertion of micro-explosives in targets hit. Emerald Seer lets you fire a clairvoyance duplicating sensor…which is cool. However…does this sensor stick to targets shot? Do they take damage? Does the use of this ability consume a bullet? Does it require concentration as per usual? No idea.

Eviscerator lets you add a shot to 19-20 bayonet attacks…but oddly, I would have expected a bonus action required or something like that. Feyser is interesting – it sports a means to lock on to targets, ignoring cover…but does an attack on a locked on target still require a successful attack roll? The pdf is not clear, stating that only force effects can stop it, which makes no sense: Slam an iron door shut. There ya go. Similarly, can the bullet cross planar boundaries? No idea. Nailer gets +1 to atk and damage versus armored foes (i.e.: almost everyone) and has a take on shooting through targets, hitting foes behind the target. Weird: The shot does not need to cause damage, so if a target completes negates the attack, it still goes through the creature…Pack Hunter nets advantage for companions when hit by the gun; when you kill someone with the gun, you heal your companion, summoned creature. Hand me that bag of kittens to shoot, my pet tiger’s injured…

Armor-compromising acid guns (with notes to repair/regain AC) would be nice. Better bursts rerolls on failed attacks and a sight-enhancing sniper rifle make sense. A Flexible, poisonous sniper rifle is powerful, but damn cool, sporting 5 unique poisons to convey. Zeta Fantastic Mark One is brutal – you hit the target better after hitting once and the gun may fire flamethrower-cones, freezing rays, nets, poison bolts or even small rockets…cool!

The pdf also provides a new feat, Rifle Expert, which helps dealing with heavy recoil, lets you reroll 1s on damage (stacks with other damage rerolls? No idea…), lets you max one damage die on crits and increases range by +50%…which, as a whole, may be too much for one feat. The pdf has a new fighting style, rifleman, for +1 damage per max-sized damage die. (2 8s on d8s would translate to +2 damage, for example). The ranger class may also select the new sniper archetype, which has choices at every step: At 3rd level, allows you to lay down covering fire or employ a bonus action to focus on one target for a bonus versus said target, but disadvantage versus another foe. At 7th level, you add Wisdom to Dexterity (Stealth) checks and inflict +2d6 damage of the rifle’s base damage when you’re hidden. Attack rolls of 18-20 require a Con-save or stun foes. At 11th level, you gain Wisdom modifier focus points each turn, up to 3 of which you can apply to atk and damage for some flexibility – cool one, though I’d put that lower on the ability-list and build further on the points. Also at this level, you may choose to fire opportunity attacks versus foes that move 20 or more on their turn via a reaction. At 15th level, your rifle damage die that score maximum damage are treated as exploding dice. Overall, a decent archetype.

Georgios Chatzipetros’ guide to rifles is pretty deadly: The level of damage you can deliver via these rifles is significant, but beyond weaknesses in the base rules of mundane guns that are exacerbated in the magic ones, there are a lot of small inconsistencies, failed kitten tests and somewhat inelegant designs. At the same time, this does have some gems that are really creative and is surprisingly nice to read and it is inexpensive to boot. While pretty flawed as written, the pdf still does have something to offer. Hence, my final verdict will clock in at 2.5 stars, rounded up to 3 due to the fair price and in dubio pro reo.

Want the whole series? You can find that here!