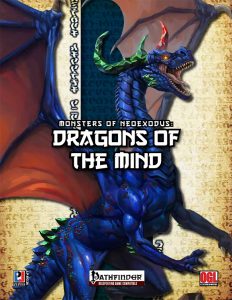 This dragon-bestiary clocks in at 35 pages, 1 page front cover, 1 page editorial/SRD, leaving su with 33 pages of content – quite a bunch, so let’s take a look!

Okay, we begin this pdf with a recap on dragon age categories, general rules and all the different tools you require to make the respective dragons shine – though this section already sports some cool expansions with new dragon abilities that include power resistance as well as a percentile chance to negate targeted spells, powers or rays. Beyond that, powers and psychic magic can be found – yep, this means we’ll both get psychic magic support as well as psionics support! The pdf also sports 3 dragon feats – Deflect Ray and its bigger brother Absorb Ray are pretty self-explanatory, while Slashing Pass is basically Flyby Attack on speed for aquatic combat, restricted to fin attacks. All of these supplemental rules are more than solid.

We begin first with new psionic dragons, the first of which would be the bloodstone dragon – it should be noted that each dragon introduced herein comes with an amazing full-color mugshot. Bloodstone dragons can narrow their breath weapon to a line of acidic, blinding sands and they also have a truly phenomenal defensive ability – they may touch objects to take on their defensive characteristics – yes, this includes potential weaknesses (like crystal shattering via sonic damage), but still, this does add some SERIOUS staying power to any halfway competent dragon…oh, and later, they can emulate liquids and gasses, making them fearsome infiltrators! Have I mentioned that their breath extends to the ethereal plane? CR 8, 12 and 17 versions of the dragon are provided for your convenience, just fyi – this extends to all the dragons herein, meaning you’ll have ample statblocks at your beck and call.

Second in line would be the amazingly mineral-style, almost scifi-looking quartz dragon, whose breath not only extends to the astral plane, it may also partially negate an aegis’ defensive abilities, providing potentially a rude awakening for those overly cocky. Their electric breath can shut down whole groups, staggering those affected, making these guys truly debilitating and fearsome foes – as they damn well should be! Oh, and they gain insight versus those struck and hitting them causes discharges…amazing.

The aquamarine dragon’s icy breath can entangle foes or encase those below the waters completely in ice (and yes, this means rising to the surface – nice to see that dragon’s breath is not wholly exempt from physics). Oh, and they may, as an immediate action, reroll any d20 a number of times per day determined by age category Fun fact – they also can manifest mind blades. Opal dragons have fire breath that bypasses immunity partially (OUCH!!) and their blazing light is so strong, they may permanently dazzle those affected…and it passes through walls of force. Have I mentioned the dazing aura of light or the prismatic spray? Their ability to exude a wave of debilitating body alterations that WRECKS physical attributes? Oh yeah, this guy seriously made me chuckle my most sadistic, gleeful GM-chuckle.

So, that would be the cadre of psionic dragons – all killer, no filler amazing so far, so how do the psychic dragons fare? Well, we begin with the BRIMSTONE dragon. (at this point, can you guess their theme/leitmotif? It’ll become evident by dragon #3, at the very latest…) These guys can sense thoughts and their breath softens the area’s ground affected, regardless of composition, as well as decreasing greatly the hardness of unattended objects. Their breath makes return from the dead an unlikely proposition. Oh, but coolest: Their breath features lingering gasses and chemicals that ignite when in contact with fire, allowing for combos. Yeah, this guy feels definitely distinct from the psionic dragons.

Quicksilver dragons can breathe either bludgeoning damage causing, poisonous metal that may smash you prone, these guys also have a psychic magic hampering emotion aura and may alternative breathe psychoactive gas…and even needles of phrenic metal that allow the dragon to exert absolute control over those unlucky wretches affected. Two thumbs up!

The subdued alchemy-theme continues among the psychic dragons with the aqua regia dragon, whose breath may generate a vortex of acid, combining the water elemental’s trick with damage – as aquatic dragons, they lack wings, but more than make up for it with their powerful tails and mouths. Oh, and underwater, their breath weapon may deal less damage, but DOUBLES its AoE. They also sport an aura of mental static, deal all types of physical damage with their natural attacks and have a retributive damage…and their charges are devastating. Obviously, they can also obliterate and capsize vessels…and their breath actually can crush foes. AMAZING.

Last, but certainly not least among the psychic dragons would be the vitriol dragon, who may emit a pulse of homicidal rage inducing rage. Their alkaline breath is particularly effective versus certain creatures and they may change it into permanently blinding blasts of alkaline dust. Oh, and their very blood is poisonous. OH YES.

Speaking of “OH YES” – remember how the first “Dragons of NeoExodus”-book had those AMAZING dragon lords? Well, this one does also feature two of these campaign-end-game-level of threats, both of which come in regular and mythic iterations and feature full-body artwork, with the first being Prism, the corundum dragon at CR 25…or CR 30/MR 10 in her mythic iteration. Prism has superb control over her composite breath weapon’s precise elemental and physical composition and the breath also adds a nasty debuff to those affected. She is shielded by an area of telekinetically-charged debris, her scales are fortified and she has a shield that converts regular damage to nonlethal damage…said damage may then be employed for devastating buffs or retributive prismatic ray. I love the words “retributive” and “prismatic ray” adjacent to one another.

The second dragon lord featured herein would be coterie, the dread cabal – a powerful entity of 3 spirits inhabiting the body of a single dragon, whose very breath may bull rush foe…but the by far coolest aspect of this dragon lies in its unique nature: The composite sprits mean that the entity undergoes physical changes, depending on the dominant spirit as well as that it is fortified versus mayn nasty tricks – the aspects, Phrenzy, Fatalis and Rigor also significantly modify not only the look of the dragon, they can make for a truly hardcore battle: A well-played dragon adversary will test the mettle of all but the best of adventurers; one whose powers can change mid–fight, however, becomes even harder to manage. Oh, and the entity eats spells and heals if magic fails to penetrate the SR of the dragon lord. The creature is ridiculously impressive in its regular iteration, more so in its mythic variety, and represents one of the best bosses I’ve seen in quite a while….particularly since the new tricks gained are…well, devastating.

Editing and formatting are top-notch, I noticed no grievous hiccups in either the formal or rules-language departments. Layout adheres to LPJ Design’s two-column full-color standard and the pdf comes fully bookmarked for your convenience. Additionally, there’s a smaller version of the file included, for easier use with tablets etc. – only approximately 3 MBs! Kudos!

Jeff Lee’s first collection of dragons for NeoExodus was already amazing and felt like lightning caught in a bottle. This, then, would be proof that the installment’s quality was no coincidence: The dragons featured within this book are universally killer – as they should be. Each has not only one, but several truly devastating tricks up their draconic sleeves; all have a damage output that should send GMs into BBEG-Muahaha-level plotting immediately. For my part, I certainly am contemplating when and how to integrate these beauties in my campaign. The fact that both psionic and psychic dragons have very distinct identities and themes that set them apart just adds this level of consistency and awesomeness to the table and shows a distinct understanding of what makes both systems tick, what makes them great. This is a superb addition to any game and a worthy candidate of 5 stars + seal of approval. Now get these dragons and start scheming -your players have been complacent for too long and these dragons should end any cockiness or demystification dragons may have undergone in your game.

You can get these awesome dragons here on OBS!