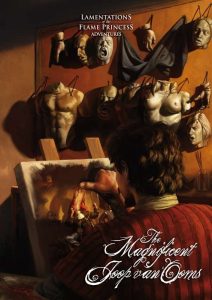 This supplement clocks in at 19 pages, 1 page front cover, 1 page editorial/ToC, 1 page back cover; additionally, the absolutely GORGEOUS artwork on front- and back-cover has been reproduced in total as a final page, so you can marvel at this Jason Rainville’s masterpiece in full. This leaves us with 15 pages of content, so let’s take a look!

We begin this supplement with a recap of Dutch history and their current place in the world, leading up to the assumed starting date of the supplement, namely 1615 AD, with currently a truce with Spain and a few overseas settlements existing. Tactics and warfare are mentioned, and by the status of morals back then, the Dutch were rather progressive and permissive, as is the wont with centers of culture and progress. This mentality obvious centers on Amsterdam, and thus, we get some dressing and supplemental material focusing on the city: We get, for example, 50 diverse and interesting hooks for adventures/encounter set-ups/rumors for the wharves as well as brief rules for the flourishing black market and selling/procuring objects – you roll 2d6 and add Charisma modifier.

In case you haven’t noticed by now – no, this is not an adventure module, in spite of the logo on the cover. Instead, this is basically an extended NPC-portrait of the eponymous Joop van Ooms. How would you describe this fellow? Well, stat-wise, he is pretty boring, a level 6 magic-user. He is a polymath, inventor, architect, and he actually was also a superb athlete, but has been reduced to simple physical mediocrity by a war-wound sustained in the war against the Spanish. Joop is basically a Super-Da Vinci; he is FAR beyond anyone in his time period regarding intellectual capacities and morals. He openly maintains that Protestants and Catholics should not quarrel, that Jews should have full rights, that Muslims are no different from Christians, that e.g. Africans, natives of India etc. should be masters of their own realms…and he actually has been caught in homosexual activity as well.

Now, usually one of these would suffice to see him potentially eliminated, but the affected personality of the eccentric artist as well as his genius do provide some leeway, and his massive financial power also means he can support charitable causes. And yes, he has both Int and Cha 18. He’ll need it, after all, he has gained his own beliefs in a way that resounded profusely with me: He has gazed beyond the void, literally, realizing the utter meaninglessness and futility of all human existence, which consequently made him realize the error of the quarrelsome dividing lines drawn by his fellow men. Instead of the by now cliché descent into madness, Joop has experienced this as somewhat liberating and thus seeks to spread his progressive ideas, born out of a cheerful nihilism. This mentality echoed very much with mine and made the character, in spite of his arrogance, rather sympathetic to me. Indeed, you know…one could actually call Joop a really good guy from our perspective.

Joop also has a faithful right-hand man, namely the former slave Gilles de Rais, freed by Ooms and saved from certain death, this powerful and impeccably dressed man is just as impressive in his own way. Of course, such colorful individuals will need a personal secretary – this would be the effeminate Henry VIII (real name Geert Bogaers), who is also often the butt of Ooms’ jokes. And yes, Joop will NOT meet anyone who has not gone through Henry. Even the Prince of Orange once had to apologize to Henry to meet Ooms. They seem bound to self-destruct. The pdf also contains a fully mapped, 7-floor studio of Joop – though, annoyingly, we can’t turn off the letters on the maps; no player-friendly maps are provided.

Now, it should be noted that there is a leitmotif to the magic inherent in Joop’s art: The number 8 is tied to malign purposes and strange effects: For example, enemies that force him to work for them, may well have a room that kills you on the 888th night you sleep there; becoming ill after the 8th meal partaken in a room; animating every 8th statue when no one is watching…you get the idea. In a cool easter-egg, the layered pdf has an 8-layer, allowing you to eliminate the 8th and every multiple of 8 entry from the tables, to make the pdf Joop-safe. Cool! The respective effects are intriguing and pretty damn cool. The same goes for his dramatizations, for Joop’s plays can yield some interesting effects, particularly for humans. Demi-humans will have no fun with Joop’s plays, for his human-centric stance makes these plays dangerous for them…but can also fortify others against e.g. The King in Yellow’s influence, render temporarily immune against sexually-transmitted diseases…and as a humanist, his plays also may render all cleric scrolls blank, all ammunition useless, etc. – yes, PCs may become VERY annoyed by this man. Another problem of his strange plays: If not executed perfectly, they can have…unpleasant consequences.

As a student of Da Vinci, Joop has created a super-deadly Golden Gun – 1d100 damage. Ouch. Every shot destroys 1d100% of the gun’s value…but why care? You’ve got a 1d100 damage gun! RAW, it is NOT destroyed when its value falls to 0 sp in a weird lapse of rules-integrity. In a cliché, he also has a submarine in his basement, a helicopter on his roof. Both are not exactly 100% reliable, but yeah. The rules here are also weird: A maneuver of the helicopter, for example, is based on 2d6 + randomly chosen Strength, Constitution or Charisma (How? Why? I don’t get it… the pdf attempts to rationalize it, but doesn’t do a good or plausible job there.) modifier.

Portraits Joop paints make what’s on them turn real – as seen on the cover, where he smudges the face of a patron. Frescoes have another effect: He has managed to trap living beings inside them: Animals, and yes, even kids – Joop is not a nice man. With his vision, he does plan on trying to paint Jesus in a church…and the consequence may well be interesting. His poetry can timeshift beings forward or backwards in time. Statues he crafts have a hollow – upon the living subject’s death, a piece of them may be inserted, allowing Joop to question the targets.

The pdf also comes with a variety of adventure hooks: On August the 8th, for example, Joop dies – his prophecy comes true and a rain of meteors destroys Earth within a week. Prevent this…but how? His submarine can make PCs explore the depth; influential merchants and creatures may attempt to get rid of him…and what if someone can get his hands on an early stage play? Joop can provide a huge amount of potential angles.

Editing and formatting on a formal level are excellent. On a rules-level, we get no spellbook for Joop and a few instances where his magic arts could be tighter in the rules language they employ. Layout adheres to a 2-column b/w-standard and interior artwork is nice and in b/w. The pdf comes with full, nested bookmarks for your convenience. The layer-based easter egg of the pdf is really neat, but I wished we got a proper player-friendly map of Joop’s studio. Cartography is b/w. I cannot comment on the print version and its merits or lack thereof, since I do not own it.

James Edward Raggi IV’s Joop van Ooms is a cool character that is balancing on the razor’s edge between visionary and villain. His modern sensibilities and per se noble intentions will resound with a contemporary audience, but on the other hand, his capricious hedonism and at this unreasonable lack of responsibility can easily cast him as a most devious and grating adversary. Joop is, in a way, a Gary Stu artist – he is literally legendary in pretty much every art he attempts and as such, can almost feel like the worst kind of GM-PC if not handled with care. As both an ally/patron and as an adversary, Joop can be abused very badly and needs to be handled with care.

It should also be noted that Joop does not make for an easily integrated character. He is very much tied to his time and age, and his behavior would not be considered scandalous in most settings; it only really works in contrast to a medieval/ darker early modern setting, preferably one based on our world. Joop works because he is a gigantic anachronism that goes beyond Jules Vernes; I could e.g. picture him as a regular Castle Falkenstein character if you strip away the imminent doom for the world that his very existence engenders. He also basically requires players that are truly enmeshed in historical accuracy of the time to work properly as shocking; otherwise, our contemporary mindsets will invariably make him look like a beacon of light in a darker age. That being said, his golden gun and functional Da Vinci vehicles feel oddly gonzo for LotFP’s earth-based supplements. More important for me, though, would be that the rules for the magic art are not nearly as tight as usual for LotFP-supplements. One thing I tend to love about Raggi’s offerings is the fact that the complex concepts they touch upon also are represented in a crisp and concise manner, and in comparison, this supplement is simply less precise.

I am, as a whole, also not a fan of concentrating all the cool ideas for magic art on one character: Having a full-length sourcebook with different characters and magic arts, with the arts themselves expanded, would be an amazing book; by focusing all on one character, both Gm and Players will have a hard-time of not feeling sidelined by Joop’s near godlike powers. Is this a good supplement? Well, it kinda is…and at the same time, it’s not. This is a very specific supplement, for a very specific target demographic. It is hard to use properly and the multi-faceted and complex character of Joop is basically a superhero (or villain) in a world where characters die like flies after botching a save versus poison. There is a lot to love here, but also a lot to hate…and honestly, the small inconsistencies make me fall closer to the latter end of the spectrum; as a person, I consider Joop to be a bit too all-powerful if played to the capabilities that his stats demand. And yes, I love his ideology of a positive, cheerful and somewhat decadent nihilism, but that should not influence the review. As a reviewer, I can see his appeal, yes, but it is more specialized and limited than the material herein really warrants and requires. Hence, my final verdict will be 3.5 stars, rounded down for the purpose of this platform.

You can get Joop and his strange artworks here on OBS!