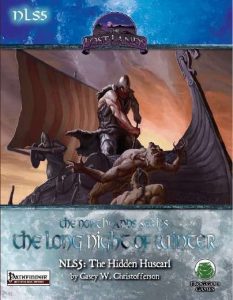 This module is intended for levels 8- 10 and is set in Frog God Games’ Lost Lands campaign setting. It can be run in another context, but I’d honestly wouldn’t recommend it this time around.

So, the first thing you have to know is that this module does not take place in the Northlands – instead, it takes place in Frog God Games’ epic and amazing hub-city Bard’s Gate. Not long ago, the longship Sea Bear, captained by Tjorvi Thurgorson, nephew to legendary Hallbjorn Bolverkson (that name made me cringe a bit – son of the bolverk?) arrived – his boisterous nature got him in trouble with none other than Duloth, basically a mover and shaker/Kingpin-style figure in Bard’s Gate – untouchable and exceedingly potent. Well, Duloth is not one to let an embarrassment slide…much less being pushed into the canals.

The consequences arrive swiftly: Tjorvi disappears and Rölnut, his second in command, demands him being found in 3 days…or else we’ll have a bad, bad escalation on our hands. Whether the PCs are members of Tjorvi’s crew or living in Bard’s Gate (or both) – they have to find the missing captain. Fast. Even if it means crossing Duloth. Thus, the first part of the adventure is an investigation at the docks of Bard’s Gate – which can slowly yield the proper rumors and, provided the PCs don’t run afoul of an untimely death at Duloth’s men’s blades, it’ll bring them in contact with what may be considered to be a conspiracy nut..only this time, he’s right.

Justin Greenwood guides the PCs towards the entrance to the catacombs in the Old Temple District – and here, the dungeon-crawl begins, for the man who has taken Tjorvi is none other than a vampiric mobile fighter/assassin with horrific skin-masks, a nasty agent named Entrade with ties to the notorious Underguild of vampiric killers first featured in “Liches & Vampires” and updated in “Quests of Doom.” Beyond ossuary golems and deadly traps, the berserking temperament of Torvi and trauma he has undergone at the hands of the vampiric torturer represents other challenges the PCs will need to overcome.

Casey W. Christofferson delivers a solid little module and I, as a person, really enjoyed it. As a person.

As a reviewer, I am more torn on it. You see, more so than any other module or supplement by Frog God Games, this completely relies on the setting to carry it – in a way, it is fanservice for those who, like me, love the lost lands campaign setting.

The tie-in to the epic Bard’s Gate tome is really cool. I loved the tie-in to the Underguild, all the connections with the metropolis…but if you take these away, you arrive at a pretty standard rescue mission with a small dungeon crawl…hat ultimately isn’t that remarkable. When run as intended, in the Lost lands, with the HUGE Bard’s Gate tome as support, this is amazing.

On its own, however, divorced from the flavor, nods and external local color and detail…it becomes significantly less impressive. Neither the investigation nor the dungeon are really remarkable, both are rather linear and since this was released before the Bard’s Gate book, it doesn’t make use of the book’s great status-mechanics either.

Don’t get me wrong, I’m all for such nods, tie-ins, for means of making a world fill “whole”, concise, real – I love that. But here, it’s doesn’t sport that much amazing aspects beyond that. What remains is still good, but simply not as remarkable as I’ve come to expect from Frog God Games and their amazing modules. Try as I might, I can’t rate this higher than 3.5 stars. If you’re a fan of the Lost Lands, round up. If you don’t care for Bard’s Gate/don’t have it/don’t want to run this in the Lost lands, then round down instead. My final verdict will round up due to in dubio pro reo.