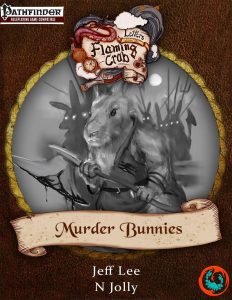 This installment of Flaming Crab Games’ series of oddball pdfs clocks in at 13 pages, 1 page front cover, 1 page editorial, 2 pages of SRD, leaving us with 9 pages of content, so let’s take a look!

Before we dive deeper, let it be known that this time around, the frame-narrative does not pertain to the excursions of the UCS Flaming Crab – instead, the pdf acknowledges the weird practice in historic documents and local mythology to draw murderous rabbits. With weapons. No, I am not kidding you. A couple of years ago, when I researched material for a CoC-scenario, I actually stumbled over such a rendition.

This pdf then presents these murderous lagomorphs as framed by the letter of Aldus Emberidge, who has compiled the traits of lepus hostili/horribili for our enlightenment and edification. The murder bunnies refer to themselves as the trius vrai. Racial stat-wise, the trius vrai receive +2 Str and Dex, -2 Int. They are Small and may use weapons with a size category larger than them sans penalty. Additionally, when using nonproficient weapons to deal lethal damage instead of nonlethal damage, they reduce their penalty to -2. They have a bite attack for 1d3 (which does not specify primary or secondary or damage type, but one can refer to the defaults there) and they also feature a 5-ft.-burrow speed. They may leave a tunnel by moving slower and gain darkvision 60 ft. They always are treated as having a running start for using Acrobatics to jump. Perception and Stealth are class skills for the trius vrai and they are proficient with battle axes and they treat all trius vrai weaponry as martial weapons. They come with a full age, height and weight table and, as a whole, represent a solid race, but their racial traits are a bit on the lopsided side, geared towards martial pursuits. Cool: They have a coded drum beat/stomping language.

The race comes with a total of 6 alternate racial traits: Hatred versus humans and halflings, Medium-size, replacing the class skills with +10 ft. movement, and swarming, which is pretty potent for just replacing the class skills. Natural armor instead of a bite can be found and +1 to save DCs of all divination spells and the option to act during the surprise round can be used to replace the weapon proficiency. The pdf also provides a premade racial subtype from these traits.

Favored class options for brawler, druid, fighter, hunter, kineticist, oracle and rogue are also included and make sense in the context. The pdf also sports 6 different feats: These include gaining an attack bonus when seeing a bleeding target, more when attacking such foes. Another feat increases burrowing speed to half speed. Quick Hop lets you, once per round, make a 5-foot-step upon being missed by a melee or ranged weapon. Another feat nets you Str mod bleed damage when biting. Really cool: Vicious Hop lets you use Punishing Kick to follow up with an attack of an unarmed strike at 1.5 Str-mod to the prone foe. Finally, a teamwork feat, Fur Pile, allows for a combined grappling.

The pdf also features 4 racial archetypes, the first of which would be the burrowing bandit kineticist. These guys are locked into earth as their choice for elemental focus. These folks can breathe underground while burrowing, and they increase their burrow speed to full land speed. This replaces the basic kinesis talent and the 1st level infusion. Starting at 4th level, the bandit receives the tremorsense utility wild talent, and they are treated as though they have accepted 1 burn for it. At 8th level, they gain greater tremorsense as the utility wild talent – this basically locks two utility wild talents in place. At 9th level, the archetype receives a nasty, brutal ability – whenever he is using an AoO versus a foe on sand, dirt, etc. while underground, the damage with elemental overflow on kinetic blasts made with earth or composite blasts are doubled. At 12th level, the burrowing bandit may, as a standard action, can attempt a drag maneuver versus a target creature within 60 ft. to drag them into the earth – the ability features full stats to pull free etc.

The primal vessel spiritualist archetype receives a primal spirit instead of a phantom, which takes the form of a rabbit of the same size as the spiritualist, employing the Manifested Phantom’s Base Statistics. The ability retains the caveats and functionality synergy that the phantom offers. Starting at 3rd level, the primal spirit may be manifested over the primal vessel’s own body in a variety of bonded manifestation, with options including +4 AC (increases to +8 AC at 13th level), including to incorporeal touch attacks, with 5th level providing +10 ft. base speed and jump as a constant SP. 7th level nets half land speed as burrow speed, with 17th level upgrading that to full land speed while also increasing the movement rate bonus to 30 ft.

Alternatively, the incorporeal bonded manifestation nets +1/2 class level to Perception and Stealth, with 8th level yielding scent as well as 1/day see invisibility. Starting at 13th level, the spiritualist may use a standard action to grant herself concealment, with 18th level yielding HiPS and the option to grant herself blindsight 30 ft. as a swift action for up to class level rounds. These replace detect undead, calm spirit and see invisibility. At 16th level, finally, the archetype replaces call spirit with mass inflict pain as a 1/day SP.

The Ruthless Abductor archetype gains Stealth and Survival as a class skill, replacing Knowledge (dungeoneering) and Ride and receives proficiency with simple weapons, light armor, lasso, mancatcher and net. 2nd level yields + class level to the DC to escape for foes tied up by the abductor. 3rd level allows for the use of brawler’s flurry after maintaining a grapple, inflicting the damage as though he had hit with ALL of the flurry’s attacks…which is imho too much for just one success, even f it replaces maneuver training 1 – 5. 5th level yields synergy of the bite attack with the close weapon group, substituting the 5th level’s feat.

Finally, the warren guardian receives a modified spell list and must choose the Animal, Earth, Plant or Protection domain, when choosing it as a domain via nature bond. Instead of nature sense, these guys get +2 to Perception and Sense Motive and 2nd level allows for the option to increase his own CL while defending the warren. Wild shape is delayed to 5th level and the archetype loses woodland stride and trackless step.

The pdf also contains a variety of different types of vrai equipment – the ambush screen, ambush and abduction ropes and the rope harpoon as well as a draught to stave off trius vrai fatigue. Cool btw.: abduction ropes make it harder for targets to escape via itchy and nauseating toxins… pretty cool. The pdf also features a total of 3 magic items, the first of which would be the quarry pole of manageable portage, which allows for the easier carrying of abductees, shrinking and securing such victims. Animated stumbling stones that create a mobile difficult terrain are pretty cool and finally, there would be…a lucky halfling’s foot…yeah, pretty nasty!

The pdf ends with a total of 3 new spells – stunning strike can stun/stagger foes hit; phantom drummer is a drumming-based variant of coded message delivery. Finally, sticky double creates simulacrum-like doubles that in fact are sticky things that may grapple foes, have weapons stuck to them, etc. Pretty cool one!

Editing and formatting are very good, I noticed no serious hiccups. Layout adheres to Flaming Crab Games’ two-column full-color standard with a blend of the amazing b/w-cover piece and full-color stock art of aforementioned violent bunny pics lending a cool identity to the pdf. The pdf comes fully bookmarked for your convenience.

Jeff Lee and N. Jolly deliver a solid take on the concept of a murder bunny race. The trius vrai are cool and very playable and the abduction angle makes for a fun, interesting choice as a player race. They are a bit geared towards the martial bent and I am not sold on every choice of the supplemental materials herein, but as a whole and for the more than fair price-point, this can be considered to be a nice, if not perfect offering. Now personally, I think a bit more cultural information would have helped make the race stand more distinctly apart and the abduction angle could also have used some explanation regarding culture and representation within the archetypes – as a whole, I kinda felt like the components here did not come together as organically as they could have. I liked some components of quite a few options herein, but I wasn’t blown away by any of them. Hence, my final verdict will hence clock in at 3.5 stars, rounded up to 4.

You can get these killer bunnies here on OBS!