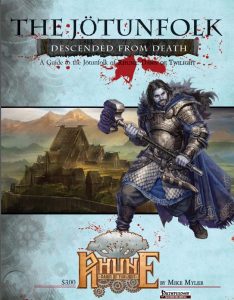 This racial supplement depicts the Jötunfolk race as employed in the Rhûne campaign setting. It clocks in at 11 pages, 1 page front cover, 1 page editorial/preface, 1 page SRD, leaving us with 8 pages of content, so let’s take a look!

After the Ragnarök clock began its inexorable countdown to the end of days, the jötunfolk started roaming the lands; discarded and unwanted children of the Thrall Lords, exposed to jötunstones, these children were changed in the womb to be born into the shape of half-giants. Increased fertility of the land was the first sign of the influence of jötunstones- it seemed like a golden age in the waiting – but then the burðr morðvíg began, the birth murders, began and saw women die to the births of their monstrously large offspring, leaving countless fathers widowers. The ostracization and negative take on the jötunfolk has remained to this day, the stones now called dreyurgr, curse stones – and thus the Jötunfolk still roam the lands, feared testament of the taint of the land and the thrall lords’ influence. Racial-information-wise, age, height and weight tables are provided for these supposedly cursed folks and nomenclature and the like is covered as well.

Racial trait-wise, the jötunfolk get +2 Str and Con, -2 Cha and are considered to be “Giant humanoids (giant)” – that should probably be Large humanoid (giant)…but then again, they are considered to be Medium until they are subjected to a spell or effect that alters their bodies, whereupon they exhibit bestial features, imposing a further -2 penalty to Charisma while in effect…which is interesting, but does it influence the availability of spells for Cha-based spellcasters? Jötunfolk receive a +1 bonus (should be racial) to CMB and CMD and get carrying capacity as though they were Large creatures and are treated as such for purposes of whether they can e.g. be swallowed whole. They also suffer a -1 penalty to AC. Their build does demand fuel, though, and thus they require twice the sustenance of humans. Jötunfolk get low-light vision and the Intimidating Prowess feat as a bonus feat. This feat can be exchanged, alternate racial trait-wise, with rock catching.

Now generally, I *REALLY* like the jötunfolk’s racial set-up: Evocative, infused with setting fluff and cool ideas, the race has all the flavor of the half-giant trope and none of the Large-creature adventuring issues in small tunnels etc. However, at the same time, I need to note one thing: Formatting is really bad here. There are a lot of annoying, unnecessary deviations from presentation standards: Non-bolded ability names, no italicization in the spells, wrong type…Similarly, there’s a paragraph after the attribute modifiers that lack blank spaces. This very flawed formatting can be seen in a lot of the content herein. Rock catching lacks the ability type, for example…etc.

On the more positive side, the classic Paizo-classes (Core, APG and magus + gunslinger) get favored class options. The pdf contains a new bloodline for sorcerors, the Jötunblooded bloddline, which lets you enchant a limited number of rocks per day and fling them at foes, turning them into lethal boulders as they fly and higher levels provide a potentially dazing bellow, the option to summon lesser giants and in the end, undergo giant apotheosis.

The pdf also provides rules for chain swords (F*** YES!) and they are pretty cool: the weapon is versatile and requires both a Str and Dex-check to quickly return to its base form…though, much like the giant’s mitt allows the wearer to throw and catch boulders with it. Annoyingly, the weapons only have stats for their L equivalents, not for M or S versions. Yes, Jötunfolk may use Large weapons…but still a pity, considering how cool I consider both to be.

The pdf also contains 7 feats – here, the formatting is btw. precise: Beyond the obvious Rock Throwing and gaining the rock throwing and catching racial traits and throwing creatures, the feats also allow for a reach increase to 10 ft., a proper size increase to Large and a racial feat to increase the potency of spells and effects requiring sonic components (excluding verbal material components) increase in potency.

The p0df also contains 4 magic items – while the general presentation here is solid, spells once again have not been italicized. The items contain spaulders that allow for size increases, enchanted throwing stones…and a belt of lesser kin that allows the Jötunfolk to be treated as a regular humanoid for the “purpose of resolving spells (such as enlarge person or reduce person.)” Here, the italicization is there…but there’s an issue: You see, giants already are humanoids in PFRPG. Don’t get me wrong: I hate this and in my game, I use a lot of the fixes suggested in Legendary Games’ Mythic Monsters-series to make giants less wimpy; and in Rhûne, it makes sense to hearken closer to 3.X’s treatment of giants as a separate type…but as a stand-alone, when judged only within the context of this pdf…this item thus does NOTHING. Finally, a minor rune pebble that helps with against and against fear can be found. The pdf contains 3 spells, the first of which duplicates the animosity exhibited towards the Jötunfolk as a nice curse; beyond that, we have a 4th/5th level cold damage/slow-combination and a powerful high-level buff with the mantle of the thrall lords’ champion, which includes a disease-causing gaze attack.

The pdf ends with perhaps one of the coolest aspects herein: The dreyurgr aura: This manifests as a vast array of strange effects that spread in a radius of 2d10 miles from the cursed stones -and the massive table is 95 entries strong, with the final entries denoting rolling twice or thrice, respectively. These effects are simply glorious if you’re looking for magical, rules-relevant effects of weird magical zones and areas, this table delivers: Women don’t need to sleep; universal poison immunity; using sticks as wands with random charges (though that could use CL-info); no lying; tasteless meat, fish that are black on the inside – this section is narrative gold and ends the pdf with a positive bang.

Editing and formatting, particularly formatting, is what deprives this pdf of the honors it is due. Layout adheres to an absolutely gorgeous two-column full-color standard that is thankfully relatively printer-friendly due to a lack of colored background. The pdf sports multiple Paizo-level drop-dead gorgeous artworks that are simply astounding. The pdf has no bookmarks, which constitutes a minor comfort detriment.

Mike Myler’s stand-alone Jötunfolk-pdf has since been revised and included in the Rhûne campaign setting and I’ll soon return to it in the context of review for that one, when I’ll also analyze it within the overall context of Rhûne. This review just pertains this file, as an isolated entity.

As a standalone book, this pdf does feature a truly imaginative race with great fluff and horribly botched formatting in some cases. The rules-language isn’t bad either, but it isn’t always as precise as you’d want it to be. Concept-wise, this is a definite 5 stars book and it does have all the makings of a unique and evocative race; I am not a fan of the lopsided design that gears them towards the martial bent, but that is a matter of taste. However, the editing and formatting of this book leave much to be desired, in contrast to the jötunfolk’s presentation in the final book,.

Try as I might, I can’t go higher than 3 stars on this file; that is not to say that is has nothing to offer you, though: The extensive dreyurgr table, for example, constitutes a great little resource and the pdf is relatively cheap, particularly considering the glorious artwork.

Interested in Rhûne and don’t want to wait for my review of the CS? You can get that one here on OBS!