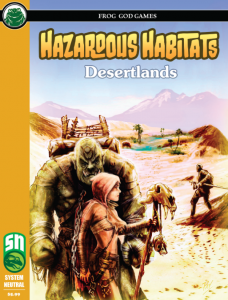 The first installment of the Hazardous Habitats-series clocks in at 39 pages, 1 page front cover, 1 page editorial, 1 page advertisement, 1 page ToC, 2 pages yellow (back cover), leaving us with 33 pages of content, so let’s take a look!

Okay, so what is this? Well, some of Frog God Games’ most criminally-underrated books for PFRPG was the series of “Perilous Vistas”-books, massive hardcovers, which included a ton of rules and information focusing on various biomes, with supplemental rules, monsters, and usually 3 to 4 adventures. Some of the adventures from these hardcovers have since then been taken out of the books, to various degrees of success, but the original Perilous Vistas books have an honored spot n my bookshelf – yes, I have them all.

Anyhow, the thing I enjoyed most about them, hands down? That’d be the assumption, very crucial to the books, that gamers are not simply consumers, that we *want* to know about a variety of topics. If there is anything I bemoan about the advent of d20-based systems, it’s that many books started to assume that only combat-relevant material needs to be featured. Compare e.g. 3.X’s Sandstorm book with Wilderness Survival Guide, and you know what I mean. In many ways, the environment, a crucial component for adventuring, all too often is relegated to window-dressing. And the GM who actually WANTS to know about an environment? They are often  left to their own devices, and/or with small and nigh-inconsequential tidbits.

The book kicks off with a general discussion of deserts – including the discussion on dry heat vs. humid heat, and the misconception that bright sands are the source of the desert being this hot. The book explains how deserts come to be…and before you yawn – no, this is no dry textbook, but it is genuinely helpful and well-presented information that assumes that the reader is both intelligent and wants to increase their knowledge. This gets two thumbs up from me.

Anyhow, the book then proceeds to depict a range of desert types, including percentile terrain element tables – hot and dry deserts, for example, can have a 10% chance for a salt pan, and the effects of dunes etc. on overland speed are noted in an appropriate, system agnostic manner. Better yet, we get a d20-based table of suggested encounters for each of the desert types featured. Furthermore, tables for population effects on demographics and humanoid demographics for settlements in the respective environment are provided..and these themselves influence the attitudes of the local humanoids! Political systems,  notes on lifestyle and sample adventure ideas are also supplied alongside adventure locations.

This system is also provided for semiarid deserts, and briefly mentions coastal deserts (without going into this level of detail), before taking a look at the importance of water and its sources, from oases to rivers to alternate sources, with tables for water availability by desert type provided, with the tables differentiating properly between seasons. Desert travel, chance for the presence of settlements and notes on the construction and maintenance of roads (and the inevitable tolls!) can be found and are all explained, before we take a gander at the various means of travel, starting (obviously) with camels, before discussing mules and more exotic mounts.

Very interesting: Since the book is system neutral, the inevitable hazards that need to be in such a book to make it complete, are grouped in 4 difficulty levels, ranging from “easy” to “arduous”, with notes on detection, identification, avoidance, and escape provided alongside dimensions (with their own categories) and effects, which allow you to judge the intended level of challenge the hazard should provide. Since this may be a bit hard to picture, let me give you an example – the first one the book provides: Contaminated Water (Terrestrial, Disease). The hazard lists the following:

Escape: Boiling or otherwise purifying contaminated water before drinking it

This can be further modified – the book provides variants. Cholera lists: “Increase Effects to Dangerous.”

Now, as you can glean from the above, the baseline from which we are supposed to extrapolate the mechanical effects would probably be 5e – while this is not a hard thing by any means, I can’t help but feel that this is where the system-agnostic approach is simply not as convenient as a proper version provided for a system, but that may be me.

On the plus-side, we actually differentiate between wet and dry quicksand, and various different poisons are also codified in pretty much such a way. A bit of a lost chance here – having at least a few poisons with a listed mundane way to cure them other than an ability check would have been nice to see. A random encounter table, and weather codified in this way can also be found – the latter comes with daily high and low temperature tables, chances for precipitation, and wind speeds. A missed chance here: temperatures are only provided in degrees Fahrenheit, and wind speeds assume mph (though the tables don’t explicitly state the latter). Ideally, it’d have been nice to have °C values as well, as °F doesn’t make sense to those not raised with it as a means to gage temperatures. It’s one of the things that keeps bothering me in RPG-books; the second value (kmh/°C) imho would really increase the value of books for those not as accustomed to imperial systems. This is particularly obvious when seeing that the text per se does feature °C values; same goes for the hazards themselves – these, alas, are absent from the temperature tables, though.

Editing and formatting are very good on a formal and rules-language level, where present. Layout adheres to a nice two-column full-color standard, with the artworks provided differing in style and relevance to the matter at hand. The book comes fully bookmarked with nested bookmarks for your convenience.

I love Tom Knauss’ environmental books, and the Hazardous Habitats pdfs unlocking them for a wider audience is a good thing in my book. It is impossible to put down this book without having learned some cool tidbit about deserts, and the material never loses its focus on being a gaming supplement – it is educational without being boring or preachy, and I love it for that. After reading this book, you’ll think about deserts within the context of the game as more than just dry places with lots of sand. So yeah, that gets two thumbs up, and ensures that this book is one you can return to time after time.

On the downside, there are a few components that should be noted: Flash floods, while mentioned numerous times, are not codified as a hazard. I was also rather puzzled to see the book provide °C values (YAY!), only to forget them in the tables to determine high/low temperatures. So yeah, there are a few nitpicks, but if you’re accustomed to the imperial systems, you won’t mind those. The hazards work as well as they can with a system agnostic approach; personally, I’d have preferred adherence to a specific system, but I’m a bit of a stickler there.

As a whole, this is a rewarding, well-crafted environmental sourcebook only very slightly tarnished by a few niggles. Hence, my final verdict will be 4.5 stars, rounded up due to in dubio pro reo.