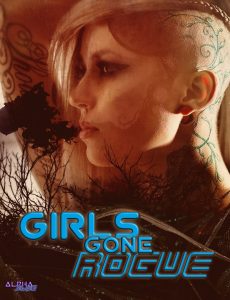 All right, before we dive in: This is designated as Mature Content. It is the expansion book for a rules-light RPG that reproduces the aesthetics of scifi-porn-satires, so if you have a problem with sexuality, dick/vagina/boob-jokes and gender stereotyping for men and women, this may not be for you. While the males and females I played this with considered it hilarious, that must not necessarily hold true for you or your game. Artwork-wise, this book’s artwork contains full-frontal drawn nudity and also features artworks of orgies that involve tentacle-aliens that look like gricks – the artwork is significantly more explicit than in Alpha Blue – where Alpha Blue was softcore, this one’s artwork is hardcore.

And the artwork and content includes…vagina sandwhales. That says it all right there. This book is not for people who take themselves too seriously and can’t take a dirty joke. If your impulse to such behavior is “unbecoming” or “puerile”, this may not be for you.

All right, this out of the way, we begin with the author’s signature array of extensive tables to provide dressing and random features, beginning with general scifi-aesthetics, a total of 30 unique alien features…and then things become interesting: Relative experience in space with 6 entries actually has significant influence regarding mechanics, netting you unique benefits. 8 alternative careers are also included. Finally, there would be Zedi – yep, Jedi-parody. Their abilities are usually rolled with 2d6, but when a character only very rarely uses his powers, it’s 4d6, which is a nice idea. However, the respective powers are severely lacking in precision. Stopping an energy weapon in mid air is cool…but can it affect ship weapons? What range does it have? What does “Boosts a zedi’s luck in games of chance.” actually do? No idea. This is basically not functional and requires copious amounts of GM-fiat. And no, just because it’s supposed to be rules-light, this does not get a pass for this one. Not good. Also problematic: The dark templar’s death curse, while a cool idea, nets a target only a 2 in 6 chance of survival, which pretty much begs to be abused, but can at least not be spammed or the like.

A total of 30 archetypes (basically tropes sans mechanical repercussions) can help customize the character and the book contains a hilarious “And now for something completely different Monty Python”-event table. A table to determine what happens to PCs between games is neat and we also get a table for sexual vibes and a massive 5 column, 20 row weird sexual fantasies and fetish creator: You could end up with ” Pineapple, pom-poms, ferns, mazes and severed toes” – yeah, not kidding about weirdness. Reactions of females to unsolicited advances, random clothing articles, hair and body, physical beauty, profession and names, 100 peculiarities of women (and 20 of men – hey, we’re simple critters!) an random “O”-face-generator, a random table to determine orgasms, Stockholm Syndrome, random pawn shop items, and a hangover “What the fuck did I do last night?” table add a lot of weirdness to the game.

Okay, but this also contains adventures – or rather, adventure-set-ups. Basically, the pdf walks you through the process pretty well, but do not expect read-aloud texts galore, cartography of the locations and the like – however, even more of the copious tables are included in the book’s modules.

Note: The following takes a look at the module section, so potential players should jump to the conclusion to avoid SPOILERS.

The first module is basically a parody of a combination of Blade Runner and a twist on the exploitation classic; hence the module is all about Ilsa of the SS – basically a Slut Series sex-replicant that has lived too long and developed sentience. By means of contracting a bio-engineered STD, the PCs are press-ganged into hunting her down, but not all is as it seems. And yes, the hunt for her will lead the PCs to a planet that contains aforementioned vagina-whale sandworms as well as washed up legend Bubba Fatt. Oh, and killer sex-bot moves.

The second module treats the PCs after the Ilsa-incident as basically loose ends and involves the PCs in a political set-up between a power-struggle in another planet’s monarchy/an escort mission with a princess in disguise. Can you picture how that’ll go. Yep. Similarly, winning the lottery may see a whole galaxy snuffed out. There is also the plot of amazonian slavers, a sex-enhancing drug…and then there would be the titanic colony ship, captained by Black Helmet, aka Moranis…or the space-sheikh’s harem…or the escape from the penal planet destructo…and have I mentioned the outline that is an homage of the genius Life of Brian? Saving a space-cheerleader from a slaver is also a pretty nice one.

The book concludes with excellent maps – the Barstar D and no less than three ships (one with strange tentacle-studded organic components, all in full-color and spanning two maps, provided testament of cartographer Glynn Seal’s talent.

Editing and formatting are very good on a formal level. On a rules-level, the book oscillates between great and some instances where it is lacking. Layout adheres to a printer-friendly 2-column b/w-standard and the b/w-artworks throughout are glorious. The pdf contains the glyph-font that you can translate to lewd sentences. The cartography is stellar and the pdf is fully bookmarked. I do not have the print version, so I can’t comment on that aspect.

One of the issues I had with Alpha Blue as a base book was that it didn’t go the whole way – to use an appropriate terminology, it got stuck in the heavy-petting phase. This one goes all out – so kudos for that! For the most part, this book contains an excellent array of awesomeness regarding the supplemental material for Alpha Blue, but there are some serious hiccups in here as well: The non-functional Zedi are disappointing and regarding the “modules”…I don’t know. Less would have been more here. Don’t get me wrong, the two long “modules” here are pretty cool, fun and evocative.

The other encounters/module-set-ups, in contrast, feel like afterthoughts and usually have this one cool idea, but don’t do too much with it. It may be just me, but I really would have preferred a more precise take on the big modules, more fodder, more details, maps or the like over these sketches. Why am I using quotation marks for “modules” here? Well…apart from the longer two, the others are basically what you’d read in an adventure-synopsis. They need you to fill in all the details and while I don’t mind too much, I still feel that their respective cool concepts could have been boiled down to a paragraph and replaced with more detailed material for the big ones – which are similarly a bit sketchy. This, as a whole, is pretty weird, for Venger As’Nas Satanis has shown that he can write more precise modules. On the plus-side, what is here tends to put a smile on your face and inspire, even if it does require some work on the Space DM’s side.

In the end, this is a good expansion, but one that falls a bit short of what it could have been. My final verdict will clock in at 4 stars.

You can get this neat expansion for Alpha Blue here on OBS!

Liked the modules? There currently is a kickstarter to fund a module for Alpha Blue, one for Crimson Dragon Slayer and one for the Outer Presence here!