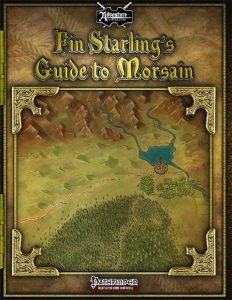 This massive Player’s Guide/sourcebook clocks in at 55 pages, 1 page front cover, 1 page editorial/ToC, 1 page SRD, 1 page back cover, leaving us with 51 pages of content, so let’s take a look!

Once upon a time, there was a massive, gorgeous hardcover that AAW Games made; so beautiful was the hardcover, it brought tears of joy to the eyes of many a GM out there as they marveled at the gorgeous artwork and the intricate details of the massive city of Morsain contained therein, as they read all the evocative ideas and plot-hooks that seemed to leap from the very page. But, alas, this massive mega-adventure had an issue – you see, it did draw upon one of the most recognizable fairy tales in all the lands of earth and its premise worked best if the PCs didn’t yet know that.

This made quite a few GMs out in the land very, very sad: “Alas, woe betide me, grim is my lot – I can’t just show off the book sans spoiling this reveal, but I do so want to let my players gaze upon the resplendence of this tome!” The cries did sound far and wide in the lands of Pathfinderia and its neighbor 3.Xia and the stricken GMs pulled their hair and tinkered with their tools, but so great was the work, they didn’t do all too well in redacting the original.

It came thus to be, that, deep within the base of mighty AAW games, the hardworking wordmsiths and cartographers did hear the plight of their loyal supporters and, light a brownie properly appeased, went to work with fervor unmatched, the goal being a lofty one that was higher than the ole’ beanstalk of Jack: To make a book for all the players to enjoy without spoiling the huge adventure they had made to such massive acclaim.

Thus, they did send out their ravens, far and wide, to all the lands and even across the ocean to their talented associates and had them draw like they had never drawn before – Justin Andrew Mason crafted a cover, Eric Quigley made visions astounding and as far as in remote Finland and Rumania, the eager quills of Mates Laurentia and Tommi Salama did move like the wind, making maps and art staggering, shining from the pages – with wrinkles and a parchment-look, all sans spoiling details for players far and wide. Jensen Toperzer took all of these gems, sent promptly back from the hands of talent most compelling, and promptly crafted a unified look, laid it all out for the people to marvel and rejoice.

And so it came to be, that, upon pages like wrinkled parchment, between prose penned by Will Myers, the conucopia of images and vistas came to life, depicting fair Morsain in all its glory – and all without mentioning or spoiling what this was about. And thus, the GMs rejoiced and cackled with glee, all according to their own temperament.

Alack and alas, this was not yet the end of the story, for the book was supposed to also have some new tricks for players to enjoy and that it did: There would be the alchemicalist, an alchemist most wondrous and different, one that sported a companion creature, a pet, if you will, which would then grow in both prowess and intellect. The concept of this complex build was most captivating, true – but in the details, some jealous creatures with intent most malign, did sneak in: You see, these masters of chemicals most uncommon get gels that replace the bombs of their brethren, but the gels, diverse and wondrous, do have some hiccups in the details, with mentions of heat damage instead of fire damage and similar minor glitches. The evil gremlins snickered and laughed, since now GMs would do need a bit of time to make this one work as smoothly as intended.

Undeterred by this, the wordsmiths made a royal guard archetype for the fighter -and here, the gremlins did not succeed in their malevolence: Designating wards, these stalwart champions made for compelling bodyguards that could truly protect their chosen wards and stagger those foolish enough to try to attack those under their protection and devoted to taking these fools alive.

Finally, they did weave the Gambler base class, which would get d8 HD, 6+Int skills per level, good Ref- and Will-saves, proficiency with a unique weapon list and spontaneous spellcasting via Cha of up to 4th level, with its own list. The gambler can cast spells in light armor sans penalty and gains bonuses to social skills against creatures of an ever increasing array of types/subtypes. 4+ Cha-mod rounds (+2 per level), the gambler can begin a gambler’s commentary, which was not unlike bardic performance, though the precise effects differed. With an emphasis on banter, the gambler also proved to be more resilient to sonic or language-dependant effects and skill bonuses when playing favored games, while also being favored by lady luck in his defenses and capable of drawing forth items or even, at higher levels, quickly take 10, and, in limited capacity, take 20. Alas, the gremlins swallowed and gobbled up the italicizations in the spell list, which also had two new spells exclusive to the class, with one allowing for scaling rerolls at level 1 – a good thing, it is exclusive!

But wait, this is not where it end – a zip-file was added with much care; two other pdfs included for your edification: A second version of the guide, not bar its beauty, one should say; a GM’s booklet was included alongside, and in its pages, the Gobhoblin at the CR 8 and the Phocce at CR 12 await the gleeful use of worldsmiths far and wide, with copious amounts of tricks and unique flavor accompanying them, resounding mythologies on their heels – alas, the gremlins did succeed in this little book as well, swallowing a verb here and scrambling a number there – a warning to all, to of their mischief beware!

Editing and formatting are, on the one hand, very good – the formal components of this guide are well done; at the same time, the rules-language does sport a couple of hiccups that made me gnash my teeth. While the glitches aren’t as pronounced as to render this pdf problematic, they do transcend what I’d consider negligible. Layout adheres to a drop-dead gorgeous 2-column full-color standard that is a sheer joy to behold, with a huge amount of stunning full color artwork and supreme full color cartography of player-friendly maps complementing a truly aesthetically compelling book that ranks among the most beautiful you can buy for in PFRPG 3pp-circuit – certainly in the Player’s Guide subgenre. The pdfs all come fully bookmarked for your convenience.

So, how does the tale of the guide to Morsain end? Well, much like many of the best stories, with a happy end, though one tinted with a bit of tragedy. You see, this book’s first half, frankly, can be considered to rank among the finest, most evocative player’s guides I have ever read. The prose is captivating and engrossing, the book SPOILER-free and yet engaging – and I *LOVE* it for that. In fact, judged only in this regard, this would probably be one of my all-time favorite PGs and worthy of a candidate spot for this year’s top ten.

Alas, the additional material, in quality, falls a bit short of what the rest of the guide offers: The alternate bard-style gambler and the alchemicalist archetype both have unique and captivating concepts, but both also have several instances where the rules-language feels like it could have used a streamlining: Damage-types, minor wording hiccups – the like. Both also, at least to me, feel like they should have been branded as alternate classes and expanded slightly – both aren’t necessarily OP or anything and I don’t think they’d wreck the game, but neither are they as concisely presented as they should have been. On the plus-side: The Royal Guard is pretty awesome – think of it as similar to Dreamscarred Press’ Warder, but sans the Path of War power-level-increase or WuXia-style supernatural attacks, rendering it a feasible option for just about every campaign and one of my favorite takes on the bodyguard concept in PFRPG.

How to rate this, then? Well, this is where I am in a pickle – and where you can read this story two ways: For the crunch alone, I’d probably not recommend getting this; in that discipline, I’d probably rate this 3.5 to 4 stars. However, as a Player’s Guide, this book excels in a triumphant and extremely immersive, unique manner. Will Myers and Stephen Yeardley have certainly upped the ante regarding the production values, quality and sense of immersion such a guide can get – this most certainly is a huge step up from the first Player’s Guide AAW Games made; in fact, I’d consider the fluff and atmosphere evoked, the PG section, 5 stars + seal-level material. Ultimately, I tend to average the two scores in such an instance – which would result at a final verdict of 4.5 stars…but to round up or down? Well, if you want this for the crunch alone, I’d suggest you round down; personally, both due to in dubio pro reo and the fact that this lives by its flavor and does its job so well, I will round up.

…and thus, the reviewer stopped typing for a second and lived, almost, happily ever after. Or, to paraphrase how those tales end in German: “Und wenn er nicht gestorben ist, so lebt er wohl noch heute.” (Roughly: “And if he hasn’t died in the meanwhile, he is still living out there today.”)

You can get this cool sourcebook/player’s guide here on OBS!