Files for Everybody: Stealth Feats (PF2) 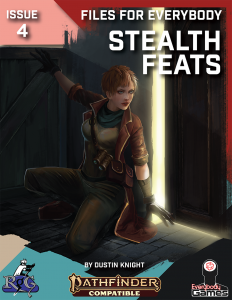 This pdf clocks in at 7 pages, 1 page front cover, 1 page editorial (Containing some rules-relevant material), 2 pages of SRD, leaving us with 3 pages of content, so let’s take a look!

Okay, so, on the editorial page introduces the synergy trait for feats; a skill action with this trait combines two skills as complimentary and taking a skill feat with it requires training in both; for classifying, they are assigned to the skill that is more important. If, for example, you have a Medicine feat supplemented by Arcana, and it requires being an expert in Medicine, but only being trained in Arcana, it’d be classified as a Medicine skill feat. Simple, right?

Okay, so let’s take a look at the 12 feats herein; we start with two feats available at 1st level, both of which require expert in Stealth. The first is Conceal Efforts, which is interesting in design; it lets you attempt an Interact or skill action while observed and compare a Stealth check with the Perception of all creatures present, allowing you to theoretically perform the action without it being noticed.  I do like this as a concept; I also appreciate the fact that the feat sports a caveat that states that the GM might require higher proficiency ranks for some actions. In many ways, this feat aims to fill a blank space between Thievery and Deception; the most common applications would be those related to the Thievery skill, and Deception’s Create a Diversion delivers what this feat offers. As such, the question is whether you’d prefer covert Interact to be feasible via Stealth. Personally, I’d consider this to be closer in the providence of Thievery, or simply require a diversion, which intrinsically draws attention away, but I can see some groups preferring the approach presented here.

Ambient Cover is interesting, in that it conceals you in crowds and makes you treat crowds as regular terrain; it also lets you treat crowds as cover when you begin and end Sneak in one. This is a pretty nifty tool, and reminded me of the origin story of Garrett in the Thief franchise, you know, back when those games were good.

4 feats are available at 2nd level: Snipe requires that you are concealed or behind cover or greater cover, and lets you, as one action, Strike with a ranged weapon, then Hide AND also Interact once or draw a thrown weapon or reload a ranged weapon. If you have Legendary Sneak, you can use the feat even without (greater) cover. I like the concept of this feat; I am not sure it’s situated well at second level; the action economy provided seems VERY good. My suggestion would be to make Interact as a substitute for the attack, also for the purpose of potential weapons that require more than one action to reload. Quick Conceal is triggered by a reaction and is triggered when you pick up a small object, or use it as part of another action, including wand-based Casting a Spell. Essentially, this one lets you make that Conceal an Object as a reaction. This is interesting, and it is kept somewhat in check by a cooldown: Subsequent uses within 1 hour yield diminishing returns, with increasing circumstance penalties. I’d allow this one. Cautious Prowler is another reaction-based one, and nets you a second chance of sorts: When you become observed as part of Seek or Interact, you treat the trigger as a failure, and then resolve Stealth vs. Perception. This one is GOLD for infiltration-heavier scenarios. Conceal Trap does pretty much what it says on the tin, save that it also applies for hazards, using the crafting DC for traps, the disable DC for hazards. It’s also only one action, which struck me as interesting; since Pick a Lock and Disable Device require two actions to perform, I’m pretty sure that this one should fall into that category as well.

For level 7 and up, we have 5 new feats: Misleading Snipe builds on Snipe, and requires two actions to perform, and adds a critical success effect that makes you undetected if the critter could see and if you are at least 15 feet away from the target of your ranged Strike. Ambush Master makes you, whenever you perform a Strike against a target and are undetected or unnoticed, treat the creature as flat-footed versus your Strikes until the end of your turn, regardless of whether your first Strike hits home. Solid. Disappear requires a smokestick in hand, or Quick Alchemy and the smokestick formula; for one action, you Interact with the smokestick and get to Hide or Sneak. Iconic puff of smoke move, solid in execution. Like it. The rules language is also phrased in a way that does not let the Manipulate trait go missing. Nice. Silent Dispatch is a free action, and triggered while undetected or unnoticed and use an action that kills a creature of your size or smaller or makes them gain the dying, paralyzed, restrained or unconscious condition, and can make the triggering creature unobserved or unnoticed by a creature observing it. You do this by Sneak into an adjacent square, and dragging it to (greater) cover. Two thumbs up. Gold.

Seek Synergy would be a skill feat that utilizes the aforementioned Synergy trait; it requires master in Stealth and expert in Perception, and makes any success with Seek to locate hidden, unobserved or unnoticed targets a critical success.

Finally, there is one new skill feat for 15th level, Spirit Away builds on Silent Dispatch, and also muffles restrained targets temporarily. Neat.

Editing and formatting are very good on both a formal and rules-language level. Layout adheres to the series’ two-column full-color standard, and the pdf has a nice piece of original art. The pdf has no bookmarks, but needs none at this length.

Dustin Knight’s Stealth feats contain some serious gems for a campaign that focuses on clandestine operations; there are several herein that I’d consider to be great picks indeed, and a couple of them are serious seal of approval-material; at the same time, you have noticed in the discussion above that I’m not as happy with all of them. That being said, I do think that this pdf is very much worth its low asking price; Conceal Efforts and the Snipe feats in particular should see some GM oversight, though.

As for a final verdict: I consider this to be 4.5-stars pdf, rounded down. Well worth getting.

If you liked this review and want to see more PF2 reviews, please contemplate leaving a tip via paypal, or joining my patreon. Thank you for your consideration!