Files for Everybody: Medicine Feats (PF2) 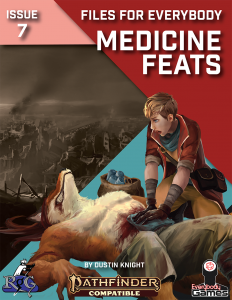 This installment of the Files for Everybody-series clocks in at 7 pages, 1 page front cover, 1 page editorial, 2 pages of SRD, leaving us with 3 pages of content, so let’s take a look!

All right, on the introductory page, we have a recap of the synergy trait: This trait combines training in two skills, using one to support the other, and the feat is classified usually as a skill feat for the more dominant skill. Additionally, the introductory page features the Acupuncturist background, which nets two ability boosts, one free boost, and one that must be applied to Intelligence or Wisdom. It also nets trained proficiency in Chakra Lore and Medicine and the Acupuncture skill feat.

This would be a skill feat with the synergy trait, and requires an acupuncturist’s kit. Okay, can we have that codified, please? I don’t know about such a kit. There is also an issue between the feat and the background. The background nets trained rank in Chakra Lore, but the feat requires being trained in Occultism. Which is it? From the other feats, I assume Chakra Lore to be the wrong skill, since e.g. Align Chakra does not require it. Anyhow, the Acupuncture feat lets you, when treating a target for 1 hour with Treat Wounds, counteract ANY one effect on the target with Medicine. This sounds OP, but the counteract level is half your character level, rounded down, the target is immune to Acupuncture for 2d12 days, and critical failure has serious repercussions, so yeah. I can get behind this.

The 2nd level feat Hostile Acupuncture requires one action and makes you roll Medicine vs. Fortitude DC; the next successful Strike with an agile or finesse weapon you make can cause the target to become sickened, with severity depending on degree of success. At 7th level, Acupuncture Master can build on this, increasing total healing, and decreasing the immunity to Acupuncture; the debilitating conditions of critical failures also are mitigated, and the feat accounts for legendary proficiency with additional benefits. I already mentioned the 2nd level feat Align Chakra, which is also a synergy skill feat with Occultism, and lets you grant a target temporary focus points. Higher DCs can be attempted for more focus points, but at increased risks of failure, obviously. The feat has a 24-hour cooldown, and a cosmetic typo “ten” instead of “then”.

At first level, we have Battlefield Diagnosis, which requires being trained in Medicine. It lets you use Medicine to Recall Knowledge about any creature that spreads an affliction, such as disease or venom. I love this. It makes sense in many ways. Two thumbs up! The final level 1 skill feat requires three actions and has the Flourish trait. This one maximizes alchemical elixirs or potions when you apply them to a target. If you have Battle Medicine, this can be sued as one action. I *assume* that the once per day caveat of Battle Medicine doesn’t apply here for the reduced duration. Personally, I’d still have kept this at 2 actions in such a case.

False Death is one of those really nifty story-relevant feats, in that it lets you induce coma in willing (and unwilling) targets, which can even fool divination. There is a weird hiccup in the feat, when it suddenly starts talking about a spell, though, and the critical failure condition implies that the feat’s user, instead of the target begins to choke. Not ideal; not something that destroys the feat, but something that decreases utility. Also at 2nd level, we have Forensic Analyst, which lets you make autopsies of targets for Recall Knowledge and learn information about the creature, potentially even profession, role, cause of death, etc. Really cool for investigations. At 7th level, one can build on that with Forensic Master, which lets you gain information sans forensic examination and lessens the failure condition.

Finally, we have Pharmaceutical Apothecary, a 2nd-level synergy feat with Crafting, which lets you harvest samples from recently-slain poisonous critters to Craft an antidote in one action; the antidote is Infused and lasts only to the next daily preparation, or 24 hours. The antidote only applies regarding the creature’s poison. This is GOLD. It’s brilliant, tons of narrative potential, excitement…this one is pure gold.

Editing and formatting are okay to good on a formal and rules-language level; there are a few typos here, and a few instances where the rules-integrity is slightly compromised, Not significantly, but yeah. Layout adheres to a 2-column full-color standard, and the artwork is nice. The pdf has no bookmarks, but needs none at this length.

Dustin Knight’s Medicine Feats show genuine talent: There is a lot I love about this little pdf: The design paradigm knows when to balance potent benefits with proper caveats, and the ideas herein enhance narrative potential; particularly Pharmaceutical Apothecary is a feat that definitely is going to feature in my games. Similarly, in spite of some rough patches here and there, I think this is worth getting for many of the feats herein. Conceptually, this’d be 5 stars + seal of approval. As a reviewer, I have to account for the glitches herein, though. Usually, this would make me round down from 3.5 stars, but considering the high-concept nature and how much the feats hit home, I’ll round up.

If you enjoyed this review, please consider leaving a donation via paypal, or joining my patreon.