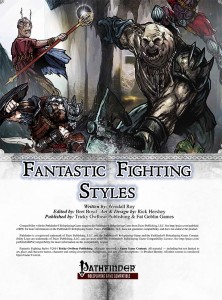 This pdf clocks in at 8 pages, 1 page front cover/editorial,1 page SRD, leaving us with 6 pages of content, so let’s take a look!

This supplement, obviously, provides fighting styles inspired by fantastic creatures, with each style sporting a nice, short fluff-paragraph that anchors the style in a kind of background you may scavenge. The first of these styles would be the cockatrice style, which increases teh DC of both Gorgon Fist and Scorpion Style, while also adding wis-mod to damage versus foes with reduced speed or in the staggered condition. Wait, I hear you say – Scorpion Style? But one can only be in one style at a given time unless one uses archetypes etc. – you would be right, but Paizo botched nomenclature – Scorpion Style is NOT a (style)-feat – just a combat-feat. 😉 The follow-up feats allow for added Dex-damage when using Gorgon’s Fist and Scorpion Style and the option to add an unarmed Gorgon Strike as a swift action against a target failing to save versus your Scorpion Style. Interesting blend of the two concepts.

The Couatl Style adds wis to damage versus foes denied their dex-bonus to AC versus your attacks and also adds wis to Bluff skill checks – not a fan of dual attributes to a skill. Additionally, feinting dazzles foes for one round. The follow-up feats allow for an immediate action feint that eliminates opponents as counting for flanking or whether you provoke AoOs, whereas the final feat allows for a 10-foot AoO feint when using a standard action to feint foes while in Couatl style. Additionally, foes feinted this way treat foes other than yourself as having concealment. Interesting!

Doppelgänger Style (sorry, can’t write it with an “a” sans cringing) nets you a dodge bonus versus foes using style-feats and allows you to use swift actions to emulate a style employed by a foe who missed you for 1 round, while also netting you a minor buff. This one is pretty much brilliant – nuff said. The follow-up feats allow for the emulation of the feat-chain of said style, while the final feat allows for an AoO that allows you to disrupt another style, hence denying the target temporary access to the style’s feat-chain. Sick…and awesome.

Manticore Style allows you to draw light thrown weapons as a free action and do no longer treat ammunition or darts as improvised weapons. The follow-up feats allow for a flurry with two additional attacks at -2 atk – but does that stack with flurry of blows/stars? The second one allows you to move full speed and execute a full attack’s attacks at any point while doing so, but requires you to use unarmed attacks, light thrown weapons or ammunition to do so. This one feels too strong for my tastes – indeed, this is the first style that imho can benefit from a bit of streamlining – one feat needs ability-stack clarification, the other should be limited to a subpar weapon group – full attack plus movement with unarmed strikes is NASTY.

Peryton Style allows you to deal bludgeoning or piercing damage with your unarmed attacks, with piercing having a crit of x3. Additionally, you can choose to render a foe to cower instead of being frightened or panicked instead, but only for 1 round. Per se cool, but cower as one of the most powerful conditions is nasty – still, average duration shortened to 1 round balances that. The follow-up feat-chain allows for better charges and a scaling save-based selection of additional detrimental effects to impose on foes of your charge. The final feat allows you to coup-de-grâce cowering or stunned foes, and add an AoE-demoralize as a swift action when executing a foe like this. I like this style, but it is very prone to being cheesed: Coup-de-grâces are almost guaranteed kills and the relatively easy set-up for this finisher means that the style in itself is deadly – when combined with another character that deals in fear (Nightblades or Dreads come to mind…), this style can become broken pretty fast. However, at the same time, it is just glorious in the hands of assassin-style NPCs.

Phoenix Style nets you +2 CMD and unarmed strike damage when facing opponents with a higher Str-score or larger size. The bonus is doubled if a foe power attacks you. The follow-up feats allow you to increase your reach when only executing a single melee strike versus foes, alos netting you a dodge bonus to AC versus foes not adjacent to you. Finally, the third feat allows you to add a second attack to a charge and also allows you to use Acrobatics to move past the foe sans AoO. The feat also allows for a reflexive means to avoid grapples at the cost of movement in the next round.

Editing and formatting are very good, I noticed no significant glitches. Layout adheres to a beautiful 2-column full-.color standard and the pdf sports numerous nice full-color artworks. The pdf has no bookmarks, which constitutes a minor comfort detriment.

Wendall Roy delivers an interesting pdf here – I was honestly surprised to see the styles herein not shirk from the most complex of concepts and executing the rules-language required with laudable precision – with minor hiccups here and there, this pdf tackles top-difficulty concepts and executes them rather well – to the point where I will most definitely use this pdf’s content in my campaign. So kudos for aiming for the top! Alas, I am not sold on the balancing of a couple of the styles herein -namely the Manticore Style and the Peryton Style imho require some streamlining – the former due to number of attacks stacking, the latter due to its extremely lethality with a pretty basic combo. These blemishes, though, do not drag down what is undoubtedly a cool pdf that should bring a grin to all aficionados of WuXia. While not perfect, I will hence settle on a verdict of 4.5 stars, just short of utter awesomeness. Since the issues mentioned impact balance, I will round down for what can be considered a quintessentially good pdf.

You can get these complex, interesting styles here on OBS and here on d20pfsrd.com’s shop!