EZG reviews the Tome of Leaf and Thorn

Tome of Leaf and Thorn 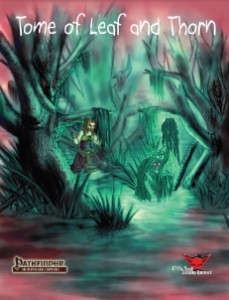 After one page that explains the design-rationale behind the book, a dissatisfaction with the existing ranger, we are introduced to a new variant of the ranger base-class, the Strider.

Striders gain d8, 6+Int skills per level, proficiency with light and medium armors, simple and martial weapons and shields (but not tower shields), 3/4 BAB-progression, good fort and ref-saves and no spellcasting progression. Representing a master of guerilla warfare, the strider starts the game with access to the shot on the run-feat, but only with bows and at 6th level, the strider may use full attacks with his bows when using shot on the run. Striders also get what is called “Focus”, which translates to a precision-based +1d6 damage (+1d6 on every odd level to a maximum of +10d6 at 19th level) and allows each damage-dice to potentially be exchanged for a +2 bonus to atk. Unfortunately, the ability is not particularly precise in its wording, failing to specify the type of bonus this ability grants, which is relevant for stacking purposes. Also, I assume that multi-class striders/rogues can’t exchange sneak attack dice this way, but I’m not 100% sure.

The strider also gets adaptability, which requires 1 round of observation (later the actions are shorter, decreasing the required time down to a swift action at 15th level) and a check of d20+class level+wis vs. the opponent’s CMD. On a successful check, striders get +3 to AC vs the foe. If they have weapon focus, weapon specialization or a style feat, the bonus is +5 instead. The bonus can’t be gained versus raging opponents, which is a nice caveat. The ability per se is grounded in a good idea, but suffers from some minor issues:  First of all, it can be used 1/combat (later twice and thrice), a disjointed, inorganic mechanic that is more 4th edition in philosophy than PFRPG: The issue is the following – long combats, prolonged multiphase battles allow for one use, whereas short skirmishes also only allow for one use. Bad design that rips me out of the game and is contradictory to my sense of immersion. There are better ways to restrict this mechanic.

Speaking of disjointed: I have a MASSIVE issue with all other uses of adaptability: They essentially allow the strider to create pit traps and striking/falling traps on the fly. I assume as the action mentioned in adaptability, though I’m not sure from the text of the traps. Worse, the abilities have no specified range (does the strider need to be adjacent?) and WILL result in ludicrous amounts of pits, falling objects etc. One in every battle will get tired FAST and again, collide with suspension of disbelief.

Striders also get combat feats as a fighter of their level -3 and may select one gift of nature on every even level, chosen from a  selection of 32 of them. There are NO surprises here – uncanny dodge, evasion, darkvision, blindsense and at the highest levels blindsight and true seeing, stealth sans concealment in natural environments, wild empathy, no AoOs when using bows in melee, improved tracking, needing less sleep, moving faster, delay poisons etc. all fall in the been there, done that-category. One ability, though, is actually interesting: Overwatch. As a standard action, you go into overwatch mode – until the start of your next turn ALL ENEMIES within your first range increment that move provoke AoOs from your ranged weapon. With the improved version, you can CMB them to prevent them from moving to add insult to injury. Pardon me saying this, but come again? This is broken on so many levels, it’s not even funny. Ranged AoOs are already rather sick, but tying them to movement in a huge area that will most of the time make up the whole battleground is insane. Especially as soon as 6th level. Never gonna happen in my game.

The class also provides some interesting lore and archetypes that feature the concept of going “grey” that limits the strider’s focus to a group that blighted his grove. You may also exchange adaptability for an animal companion, a rather weak bonus on home ground, apply his focus to a weapon different than the bow and a desert-themed ranger than can burrow into sand and essentially shadow jump through desert sand. Why not make this a strider instead? The class also gets a new cloak, which unfortunately falls in the completely uninspiring category.

The class also comes with favored class options for the base races and the LRGG-races.

The pdf also features the Geomancer, who gets d6, 3/4 BAB-progression, 4+Int skills, proficiency with simple weapons, short bows and long bows, light and medium armor and shields and spontaneously casts divine spells of up to 9th level via charisma. Geomancers communicate with the spirits of the land, Genius Loci, and gets an aspect of these spirits as a familiar, allowing him always access to this locus’ powers. Wait, what? Yes, for spellcasting here has an interesting design-decision: The base-list of spells available is VERY restrictive, with  most of the available spells being determined by the genius locus in whose territory the geomancer threads. An actually rather neat idea, especially due to the familiar spirit learning to change loci at higher levels and the ability to use a rather bland ability to tap into a place’s power to cast through the spirit and even have it cast spells.

A total of 9 such loci as well as advice on improvising new ones are given, though honestly, creating a list of spells on the fly is annoying enough – having to balance nature’s blessing and world bound (the capstone), two more abilities of the geomancer that depend in their bonuses on the locus make doing this on the fly even harder. All in all, though, an interesting class – somewhat like a cross between a shaman and a witch’s familiar-focus. Unlike the strider, the geomancer does not get favored class options.

The pdf closes with 10 different feats, granting extra gifts of nature, change energy type of your spells according to your locus. And then there is Skyborn Shot. Per se an iconic image: The archer shoots the sky, one round later the arrows hit a square within his first range increment. You may shoot up to the amount of arrow this way as your maximum attacks – and this is where the feat comes apart. What constitutes maximum attacks? Enhanced by magic? Rapid Shot? Manyshot? Do the penalties of rapid shot apply? Worse, the attack is resolved AS A TOUCH ATTACK. Yes. Full round attack touch attack that hits EVERY creature in the square with ALL arrows. If the creature was already in the square, you receive a -4 penalty to the touch attack, but not if it only has entered the square. That makes no sense whatsoever – moving targets should not be easier to hit. Furthermore: What happens in a  dungeon? Can the feat be used in caverns or do arrows hit the ceiling? The mechanics are downright broken in power-level and in execution. The other feats are ok, with especially the option to crit through a foe with your arrows and hitting the next foe in line sounding nice, though the feat lacks information whether the -4 penalty on subsequent attacks is cumulative, i.e. if an archer manages to crit two foes in a row, whether the 3rd hit is at -8 or remains at -4.

Editing and formatting are ok, though e.g. the “special”-sections of the feat are not in bold and I’ve noticed some minor glitches here and there. Layout is rather beautiful, with a parchment background and adheres to a 2-column standard, though admittedly e.g. the traps could have sued some better formatting, their entries feel a bit jumbled. The pdf features several pieces of original full color artwork, though apart from the cover and the geomancer none I’d get excited about. The pdf comes fully bookmarked, which is always a plus, though I would have enjoyed a slightly more printer-friendly version as well.

Oh boy. On the one side, the alternate classes herein are based on good ideas and the execution is not that bad – especially the geomancer works as intended, though the restricted spell-list and their dependence on environments mean that this class most definitely is not for everyone. The strider, in contrast suffers from multiple mechanics that are a disjunction of rules from the in-game logic of the respective settings, which imho is rather problematic.

Add to that options here and there that are many things, but not balanced and we arrive at an ok take of the ranger. Were it not for Marc Radle’s Spell-less ranger by Kobold Press. And the Shaman. Both classes cover the territory – a spell-less ranger and a spontaneous, nature-themed caster and unfortunately, both do a vastly superior job when compared to the content herein. While the Geomancer is mechanically interesting, as a player I’d rather play a shaman since the class is less restricted in its usefulness and the spell-less ranger mops the floor with the strider – in all regards. Production quality, amount of content, wording, the rules don’t feature broken aspects like overpowered talents and feats and disjointed rules… I could go on, but won’t.

In the end, the tome of leaf and thorn is an ok addition to the game, but one that falls flat of its own potential, having good ideas, but executing them in a sup-optimal way. Due to the issues here and there and the fact that the territory has been covered, in better supplements, I’ll settle for a final verdict of 2 stars.