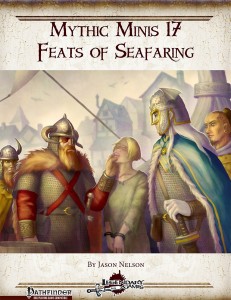 This time, we’re all about sea-themed feats, so let’s check this out!

The mythic version of “Corsair” extends its benefits to any aquatic environment and doubles the bonuses while on board of a ship and also allows you to treat foes as flanked via mythic power. Solid. The “Hoist the Colors” mythic feat allows you to intimidate foes via your flag and, with mythic power, even whole crews/vessels and similar military units – and yes, more power, more severe fear-effect. Awesome, mythic – nothing to complain about!

Naval Commander comes as a regular and mythic-augmented version – it allows you to aid another ALL target allies on your ship. Which is damn cool even before expending mythic power to make the bonus LAST. Two thumbs up, especially since bonus to atk is still limited to once per ally/turn!

Savy Seafarer also offers two versions – the regular one offering bonuses to ship/repair/survival-themed actions, increasing the bonus with familiar vessels. The mythic version further increases these bonuses…and allows you to TRACK VESSELS OVER WATER. Yeah. THAT is what I want in mythic – epic options, more roleplaying potential, stunning derring-do, doing things that transcend the powers of regular PCs. Two thumbs up!

Finally, mythic Sea Legs kilsl most penalties to acrobatics and climb and also lets you move sans delay through water-themed terrain, but does not protect you from it. Solid.

See, this mythic mini is what I’m talking about -feats that are bland and subpar in their regular, non-mythic version get better and worthwhile. The new feats are glorious and actually vastly increase roleplaying potential while breathing the spirit of mythic gaming, offering both rules and simply new hinges on which to base storylines and scenes. This one’s just awesome and well worth 5 stars + seal of approval – if your mythic campaign goes anywhere near pirates and similar themes GET THIS!

You can get these glorious mythic feats here on OBS and here on d20pfsrd.com’s shop.