EZG reviews In the Company of Lurkers

In the Company of Lurkers 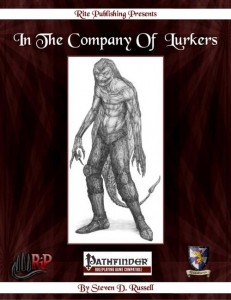 This pdf is 16 pages long, 1 page front cover, 1 page editorial, 1 page SRD and 1 page advertisement, leaving us with a total of 12 pages content, so let’s check this out!

It’s been a while since Rite Publishing has graced us with another installment of their awesome race-books and this book follows the format by kicking off with a frame-narrative that has Owain Northway, Questhaven investigator and sleuth interview a member of the race in question, thus making the overall presentation an intriguing read. But what are lurkers? Chances are that you’ve read that they are half gnome and half cloaker and, thus, you may suspect that the race’s genesis was anything but planned: Born from an accident via shadow walk and magical energies, the first lurker managed to uncover a way to replicate the transformation and thus the genesis of a new race begun by what could be considered a mad genius made by accident – and lurkers have bred true. There are essentially three dominant ideologies in lurker society: Those following the way of Mullaglem are flamboyant dandies and can be considered the most public of the lurkers. Most of the race adheres to the Mullirog – the stealthy and less glamorous accumulation of secrets to further the race’s agenda. Finally, there are the dark Balrafang, lurkers that revel in amoral behavior.

The lurkers get +2 to one ability score,, are small, slow, get darkvision, +1 to saves against illusions and, provided a Cha of 11+, 1/day invisibility as a spell-like ability, a natural attack with their tail slap(Essentially a skin-cloak from the head), +2 to Intimidate, stealth and disguise and the ability to emit a terrible wail that shakens foes.

There also are alternate racial traits: Lurkers can have+2 to Con and Cha, -2 to Str, +2 to atk against flat-footed opponents, a wail that panics or cowers foes, a wail that nauseates foes, can also be medium-sized (but then can’t take one of their coolest feats), roll twice in social interaction and take the better roll, +2 to disable devices and use the skill 1/day as a swift action, gain minor spell-like abilities, emit a shriek that holds foes and gain a +2 to initiative – quite an assortment of unique racial options there!

Thankfully, the race also comes with age, height and weight tables and favored class options – and if you’re like me, you’ll love the 3pp-synergy here: SGG’s Godling, Time Thief, Witch Hunter, Shadow Assassin and Death Mage are covered as well as RiP’s own taskshaper, 4 Wind Fantasy Gaming’s Gladiator and finally 0onegames excellent Guttermage-class, though the latter is missing the information from which book it is.

A total of 6 different feats enable one to further customize the respective lurker by improving the duration of his/her vocal attacks, spell-like abilities and two especially neat ones: One lets a lurker use his tail slap to engulf smaller foes and the other actually grants a lurker the ability to fly (and yes, this feat can be taken multiple times to fly faster and with better maneuverability)!

After that, we’re on to the archetypes: Bards get access to the new dirty trickster-archetype and oh boy, is it nice: Not only do these bards get access to dirty trick-feats, they also essentially are spin doctors, being able to impose penalties on foes, cause memory lapses (enabling you to reroll botched social skills) and modify memories. Even cooler, the PrC has an ability somewhat akin to one of my favorite spells from Dreadfox Games’ Grimoire Mortalitas, which enables the trickster to falsify information gleaned from the communication with the dead. Also rather nice: Faking weaknesses, even one’s death are part of the trickster’s repertoire and at the highest levels, a trickster can actually modify the landscape to twist paths and finally even purge all memory of certain events from collective knowledge, making these bards indeed deadly and disturbing villains.

In Questhaven, the Inquisitor-archetype Night Haunt makes for a kind of vigillante-city-watch: They gain full BAB, can generate partial concealment via shadow, smoke etc. and gain shadowy grappling-hook lines as well as cohorts as per the leadership and gain a telepathic network with her allies and even improvise magic items of up to 2000 GP. The archetype comes also with a new inquisition and a new judgment to capture foes alive. Sounds familiar? Yep. Essentially, the NIght Haunt lets you create a Batman-style character -awesome!

And then, there’s the final archetype – another awesome piece of 3pp-synergy, the Kithmourn Lurker, an archetype for SGG’s stellar Shadow Assassin-class: Creepy to the extreme, these beings died and are then returned, alive or undead, indoctrinated into the order and then let lose upon their foes – their techniques including a str-damaging effect, an unhealthy curse and the ability to soul bind the souls of those slain by the Kithmourn.

Conclusion:
Formatting is per se solid, but I feel I need to address editing: This pdf is not up to Rite Publishing’s usually high quality editing and sports a rather uncommon amount of easily avoidable editing glitches that range from double letters over faulty grammatical constructions to missing blank spaces. I couldn’t help but feel as if something went wrong: The prose of most of the pdf is a great read, but some paragraphs feel a bit off, suddenly exchanging the avid prose for short and simple sentences, especially in the beginning of the pdf. It should be noted, though, that none of the glitches particularly detract from one’s ability to understand the rules. The pdf comes fully bookmarked and the b/w-artworks by Mark Hyzer are wonderful – creepy, cool and disturbing -excellent job! Layout adheres to RiP’s classic, rune-cornered two-column b/w-standard.
Oh, you lurkers, how I love these creatures, how I enjoy the race and how am I torn on my verdict. The crunch of the race is rock-solid, the abilities iconic. The feats offer options, the 3pp-synergy is awesome and then there are the archetypes: Each of them is absolutely stellar, cool and imaginative – I love the three and they are quite frankly, at least for me worth the price of admission. Apart from the hopefully soon resolved editing glitches, I also noticed a distinct absence of a racial paragon-class, which is a true pity if you take the quality of the other racial classes of the series into account, which always felt like a central piece to me -taking the tail slap and the shrieks and making a PrC centered on these cool signature abilities would have been the icing on the cake.
In the end, the editing glitches, slightly inconsistent prose and missing PrC conspire to drag the lurkers down from what could easily have been my favorite installment in the whole series so far – as per the writing of this review, I’ll settle for a final verdict of 3.5 stars, rounded down to 3 and with my hoping for an update/revision that makes it as awesome as it’s supposed to be. Don’t get derailed, though: Especially if you liked what I said about the archetypes and if you want to go for a truly unique race, the lurkers still are a good buy, even with their flaws.

Take a look at them here!