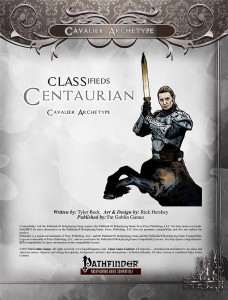 This installment of the CLASSifieds-series is 6 pages long, 1 page front cover/SRD, 1 page SRD, leaving us with 4 pages of content, so what is this about?

The centaurian archetype replaces ride with knowledge (nature) and does not gain proficiency with heavy armor. Instead of challenge, the centaurian receives the so-called Tauric Shape – essentially a wild-shape variant, choosing a lower torso of a quadruped one size larger than the character. This increases size category by one step, but avoids the weapon-size debacle by simply also granting the undersized weapons creature ability of the centaur. The cavalier also gets a +2 bonus to Str and a +10 ft enhancement to base land speed. Equipment worn on lower torso and feet melds with the form or shows up in pouches, ready to be used. While in this form, cavaliers may wield lances one-handed and deal double damage with lances when charging as if mounted. This is a polymorph effect that lasts 1 minute per level (probably should be class level). At 3rd level and every 3 levels after that, the centaurian can assume this form an additional time per day. While personally, I just would have made it possible to shapechange in increments of 1 minute, but nothing wrong here.

In lieu of a mount, centaurians may 3+cha-mod times per day, as a swift action command allies to grant them a +2 morale bonus to attack rolls against ALL foes the centaurian can perceive. Yeah…this one’s too strong. No range? This is arguably better than bardic performance and since the only limit is being able to perceive foes, makes the cavalier very strong in open warfare. Not strong enough to make me yell broken, but too far on the power-scale for my tastes. This increases to also providing +2 to damage and a +1 dodge bonus to AC at 4th level…so yeah.

At 3rd level, instead of cavalier’s charge, the centaurian is treated as if having the mounted combat feat and gains the benefits of aforementioned ability while in tauric form. At 5th level, centaurians may, as a swift action con-mod times per day, gain the benefits of a haste-spell for 1 round per 2 levels (which, again, should be CLASS levels) – as an extraordinary ability. No suppression. After the burst of speed, a centaurian takes a -1 penalty to atk and AC and a -10 ft penalty to speed. However, I should note that this ability is NOT restricted to tauric shape as written…not sure whether that’s intentional.

At 12th level, the centaurian’s bonus to str in tauric shape increases a further +2 and they may initiate an overrun attempt sans AoO at +2 when hitting a target as part of a charge. Weird here – I *assume* this only works in tauric shape, but as written, a base-form centaurian could overrun smaller creatures with this just as well when not transformed. At 14th level, merely initiating a charge may make enemies that fail their save shaken. This extends to all enemies that can perceive you (again: very powerful in open warfare); More interesting – the ability fails to note that it is a fear-inducing effect, which becomes relevant for paladins et al.

We also are introduced to a new cavalier order, the order of the centaur (good, since the centaurian doesn’t get the challenge of other orders)…ähhh…wait. This order also provides a challenge. Whenever using a move action when moving 10 feet or more, the cavalier gets a +1 dodge bonus to AC against the target of the challenge for one round. The bonus scales. Okay, though you have to bear in mind that the centaurian doesn’t get this challenge! The order also reduces the AC-penalty when charging. At 8th level, 1/day when hit by an attack, the cavalier may make an acrobatics-check to negate the damage – NOT a fan of skill versus incoming attack. I’ve discussed in length before why I consider skill versus atk-roll problematic and I don’t like repeating myself over and over, so yeah.

We also are introduced to 4 new feats:

-Tauric Mount: Carry allies into battle as if a mount, use tactician to grant them temporarily mounted combat or archery.

-Improved Tauric Mount: Allies may make full attacks after a charge while riding you. See, this becomes problematic – I assume the player character riding can only make one attack after charging sans this feat if s/he’s delayed/readied an action, but I’m not sure. The feat’s text could be read to imply that the rider gets the full attack in addition to the one they could potentially execute after your charge in their initiative order. Usually, the mount in mounted combat is subsumed under the rider and relegated to mostly moving/minor attacks. Here, with one player taking control of the mount and the other being the rider, things get more complex since a mount usually acts at a rider’s initiative score. This problem also extends to the regular tauric mount feat, but becomes more pronounced here.

-Tauric Weapons: These gain you 2 primary natural weapons at 1d4 bludgeoning or slashing while in tauric form.

-Tauric Pounce: Make a full attack at the end of a charge, but only with your natural weapons. Urgh. Pounce is evil. The restriction keeps this somewhat in check, but I’m positive, that this can hurt in the hands of the right player.

Editing and formatting are good; while I’ve noticed some minor glitches in the rules-language, nothing too serious did crop up. Layout adheres to Fat Goblin Games’ elegant 2-column greyish/brown-standard and is a joy to behold. The color cover artwork is nice to see as well. The pdf has no bookmarks, but needs none at this length.

Tyler Beck’s Centaurian is a cool archetype indeed, allowing you to play a centaur without the size-issues/ladder-climbing etc. – and its mechanical execution is mostly solid. Regarding the archetype, my mayor complaints boil down to the lack of range limitations regarding their buffing capability and another issue: Weight. Does the centaurian’s size-increase also increase weight? If so, by how much? I *assume* standard guidelines here, but I’m not sure and when traversing brittle bridges or galloping over a recently frozen river, that becomes relevant. Another issue I have would be with carrying capacity -quadrupeds can carry A LOT more than bipeds, so doe carrying capacity increase while in tauric shape?

Now let’s be honest, these points are essentially nitpicks, but with the supplemental information, things get a bit…ugly. The new order is fine, if nothing special…but why not create an order specifically for centaurs/centaurians? The archetype eats challenge and similar abilities all up, so some customization would have been nice here, especially for the poor cavalier who already the shortest possible end of that stick. Now where things turn ugly is with the feats to carry allies into battle. Sounds easy, right? Well… it’s not. Mounted combat is already not too simple with the mount doing the move actions and the rider acting. When taking two players AND providing feats that mix up the action economy, the wording better be extremely precise. here, it’s not -as written, they just don’t work…at all.

So, how to rate this, then? All in all, we get a neat archetype with nice ideas and Tyler beck once again shows that he is a promising designer. But on the downside, this could have used an expert rules-editing to make the feat work, a clearer distinction re class/character levels for many abilities etc. This does not make this pdf bad, but it precludes it from reaching the higher echelons of my ratings. Hence, I’ll settle for a final verdict of 3.5 stars, rounded down to 3 for the purpose of this platform.

You can get this archetype here on OBS!