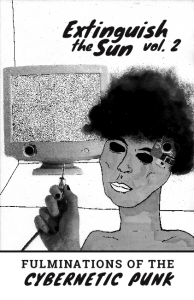 The second installment of the Extinguish the Sun-‘zine clocks in at 20 pages, 1 page front cover, 1 page editorial/introduction, 1 page back cover, leaving us with 17 pages, laid out in 6’’ by 9’’ (A5), so let’s take a gander!

As the introduction notes, this book is essentially a genre-port/hack that takes the LotFP-rules (Lamentations of the Flame Princess), and adjusts them to apply to the cyberpunk genre. (As an aside, if you’re like me and considered the first issue’s setting to be promising – it’s been picked up by Necrotic Gnome!) The different focus can be seen in layout, with corporate logos and warnings provided.

The supplement presents 4 new classes; The cyborg gets d8 HD, save- and XP-progression of the dwarf, and the class gets 3 skills to be divided among 5 core skills; these behave like the usual LotFP-skills, and include Guidance (which covers navigation), Knowledge, Vision mods, Math, and Strength – the latter is a bit unfortunately-named. Why not call it “Feats of Strength”, “Muscles” or some such to avoid confusion between skill and ability score. The Lowlife gets d6 HD, save-, XP- and skill-progression as a specialist, with two unique skills introduced: The first is Acquisitions, which represents the ability to get their hands on goods, legal and illegal products, etc.; the second skill is Offloading, which is the skill used to get rid of stuff, fence contraband, etc. These two skills start off as 1 in 6, so the base values need not be purchased. The mercenary has d10 HD, an elf’s saving throw progression, and an XP-progression of the specialist. The mercenary can get odd jobs that pay 50 bucks per day, and they pick a primary weapon from a list of 3, a sidearm from a list of 4, and a special ability from a list of 4 (Skilled, Stout, Savage, Martial Arts). With the primary weapon, the mercenary has an attack bonus equal to their level, ½ their level (rounded up) with the secondary weapon. If choosing unarmed as secondary weapon, the mercenary deals 1d4 damage with those. Martial Arts upgrades unarmed secondary weapon damage to 1d8, if present, and when the character attacks, they get +2 to Ac until their next turn. Stout upgrades HD t d12. Skills nets 4 points that can be used in specialist skills, but not the new ones of the lowlife. Savage increases the daage die caused with all attacks by one step; d12s become d12 + 1d4, just fyi.

The final class, and the only one sans a delightful b/w-artwork, would be the Phreak who gets d4 HD, save-progression as a magic-user, XP-progression as a cleric. These fellows have embedded datajacks, and can jack into the Matrix. If they take damage while jacked in, they are ejected and take additional damage. Safely logging off from the Matrix takes a whopping 10 minutes. The Matrix as envisioned here is explained in detail; its structure is that it is made up of nodes, rooms, all interconnected, a vast, sprawling digital metropolis/dungeon-crossover. Equipment must be smuggled into the Matrix via a backdoor, and costs as much in the Matrix as in real life. Matrix-use items can’t be sold. Regular characters can only take 4 items with them, while phreaks get up to 6. Additionally, phreaks get d12 HD in the Matrix, and attack bonus equal to their level. The HD of other users is contingent on skin-quality of the avatar, ranging from d4 to d10.

The pdf also presents a basic equipment list that covers both melee and ranged weapons, as well as armor. Ranged weapons do tend to inflict A LOT more damage than melee; the pdf does not state how reloading, clip-size etc. is handled, and regarding the latter, no information whatsoever is provided. Considering the damage-discrepancy, I’m pretty sure that something’s missing here.

The pdf also features a brief summary of the setting, which is pretty much par for the course: 5 big corporations  rule the world, and they all get a brief paragraph of a summary, alongside their own corporate logos. Only a job at the big 5 is worth anything – everything else renders you an outcast, as the employment card doubles as an ID and credit card. Players are either ID-less outcasts  or have the very limited freelancer cards.

The pdf closes with a brief interview featuring Daniel Sell of the Melsonian Arts Council.

Editing and formatting is very good on a formal and rules-language level. Layout adheres to a one-column b/w-standard with nice interior artwork by Evelyn M.; David Shugars’ layout is nifty for such a minimalist publication, and I really like Anxy’s cover art. The pdf has no bookmarks, which is a bit of a comfort detriment.

Chance Phillips’ cyberpunk hack left me exceedingly unimpressed; I’m a fan of the genre, and while the execution of what is here is decent, I don’t really see the necessity of the supplement; this is very much cookie-cutter cyberpunk without flair or novelty, and if you have ever read Neuromancer, or played 2020 or Shadowrun, you can probably improvise more complex and exciting  material. The conception of the Matrix as a dungeon stand-in is clever, but not sufficiently-realized/explained to make long-term campaigning make sense. As a whole, I’d be hard-pressed to play a compelling game with these rules, or a motivation to build on them. Unlike in the first installment, there simply isn’t much here to set this apart on either a mechanical, or narrative level. I can’t recommend this ‘zine. My final verdict can’t exceed 2.5 stars, rounded down.

You can get this pdf for just two bucks here on OBS.