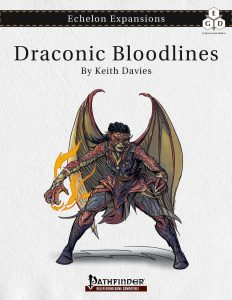 So, I’m not starting with the subject matter, but with the houserule mentioned on the first page: It’s kinda weird that bloodline spells are learned later, so the pdf provides an interesting and concise way to fix that without increasing the power of the class. Beyond that, we also get alternate rationalizations why a given character may have the draconic bloodline, from constellations to soul-wrenching rites of passage, this makes for a basic and pretty nice introduction. The pdf also presents suggestions of how a given bloodline may influence the character’s behavior, which is a nice roleplaying aspect in the crunchy tome.

But what is this truly about? Well, to put it bluntly, the author at one point realized that it is kind of dumb that one draconic bloodline represents the influence of all of dragonkind, with its distinct and widely diverging branches. So, while we reiterate the basic draconic bloodline as a starting point, we from here on out extrapolate the respective, more customized ones. This usually not only changes a couple of bloodline spells and powers, but makes them work as basically their own, unique and distinct entities. The respective abilities are formatted in a slightly unconventional manner, with the respective ability names in power-point like bubbles and tabs on top, denoting the precise ability type and the level it’s gained – while not immediately aesthetically pleasing, from an organizational point of view, this solution proved to be surprisingly efficient in conveying the necessary information – so yeah, I actually grew to like it pretty quickly.

Speaking of sensible and smart ways of conveying information: The sub-chapters of the pdf begin with tables that denote the spells, breath weapons and powers of the respective draconic bloodlines in tables that render the use of the pdf extremely comfortable. Now, as mentioned, the draconic bloodlines featured herein do not *completely* change the draconic base bloodline, instead opting for what could be considered to be an approach similar to mutated or wildblooded bloodlines, though the changes made. A sorceror who traces his ancestry to a black dragon, for example, gains the sire’s ability to breathe underwater and freely use spells, breath weapon etc. while submerged – which makes all kinds of sense to me.

Where applicable, scaling mechanisms have been included – for example regarding the electricity aura of sorcerors hailing from a blue bloodline. That being said, in some of the scaling information bits, very minor and purely aesthetic hiccups have crept in: While it is evident that the damage increase should cause electricity damage, the pdf omits the damage type for these increases. That is me at my nitpickiest, though, and should not be taken as a complaint against the rules-integrity of the pdf – from context, the damage type is perfectly evident and referenced a sentence before. Amazing: The blue bloodline sorcerors get WINGS OF LIGHTNING. That actually interact with breath weapon etc. at higher levels. Come on, those visuals are cool! Sorcerors with a red sire can, as a capstone, learn to incinerate foes utterly with their breath, as another cool example of such custom abilities.

While the first section of the pdf covers the chromatics, as you no doubt have gleaned by now, the second section proceeds to cover the metallic dragons, where brass dragons get the sandstorm capstone of their parentage, while scions of bronze receive water mastery and the ability to generate vortices at higher levels. It should be noted that many of these abilities in themselves do feature a scaling mechanism, improving over the course of the respective bloodline’s ability-steps.

Thirdly, beyond these two classic families of dragon, we take a look at the primal dragons as well, with the cloud scion’s lightning fog at 9th level constituting a neat example for the ability. Minor hiccups in rules-syntax have, just fyi, been taken care of. Kudos there!. And yes, even the claw progressions of the respective bloodlines also tend to differ in some ways, which was a welcome surprise to me. That being said, while it is easy to resort to the default, I still would have appreciated the natural attack abilities specifying whether they’re primary or secondary – still, that is purely aesthetic and won’t influence the final verdict, as it is based on the way in which the original bloodline was worded. On the plus-side and to give you an example, umbral-blooded sorcerors gaining the ghost touch property for their claws makes sense to me.

The pdf doesn’t even stop there, though – the imperial dragons are yet another massive group of dragons covered with proper bloodlines, which should elicit cheers from the WuXia crowd…and, once again, the ability-modifications make sense as a whole: Forest dragon-bloodline sorcerors gaining huntsman claws and a capstone that lets them petrify foes, for example, makes sense to me and sets them apart from a flavor point of view in an interesting manner. The capstone for sky dragon bloodline sorcerors to ignore electricity immunity and resistance with their breaths makes for nasty surprises and the sovereign dragon’s heritage, which increases the DC of spell saves and allows for the conjuring of golden armor (and a master counterspelling capstone) also fits the themes of the draconic sire.

“But wait, endy,” you’re saying “that’s not all dragons!” You’d be right. Even the frickin’ outer dragons are covered! Solar dragon sorcerors get lay on hands – and yes, the pdf does provide information for what happens if you multiclass with paladin, just fyi. Big plus: The verbiage of the ability and its multiclass interaction have been cleaned up and now provide full synergy without a means to misread the material.

Speaking of which, the pdf is not *always* perfect regarding its abilities: The time dragon’s “second chance”-ability, for example, reads: “At 3rd level, you get a bonus to initiative checks equal to 1/2 your sorceror level.” (VERY potent – keep it away from mythic gaming!) and provides rerolls at higher levels – the ability, which could previously be misread if you tried hard, has been streamlined further and now works in a precise manner. Kudos.

The revised iteration of this book, however, features more tweaks: Accounting for the Player Companion: Legacy of Dragons, the pdf now includes the expanded draconic bloodline options, such as arcana for the draconic families and the breath weapon types. The Draconic Manifestation feat has also been integrated into the material – and it should be noted that the form of the exotic/alien dragon spells have been integrated into the various different bloodlines. Better yet, the pdf actually explains some very minor (and imho justified) divergences in design paradigms here. And yes, the book has changed more than half of the bloodline arcanas herein to maintain compatibility and a unified perspective. What I’m trying to say is this: The pdf has not only taken the minor hiccups and fixed them, it went the extra mile while doing so. I really appreciate this mentality.

The pdf ends with designer’s notes that explain why esoteric dragons have not been included, the design-goals and an exceedingly helpful and detailed six-page index for the pdf that makes navigation really, really comfortable. And before you’re asking – I actually checked the index – yep, it has been updated to represent the changes made to the file and the expanded content – again, big kudos!

Editing and formatting have been improved from their already impressive original iteration – this is now top-notch. The colored ability-headers can be a bit of a drain on the printer, but other than that, no complaints in that area. The pdf has no artworks apart from the cover, but comes with very detailed, nested bookmarks that render navigation comfortable. These, in conjunction with the index and the clean and crisp presentation generate an overall extremely easy to use pdf.

Keith Davies’ “Draconic Bloodlines” fix a hole in the rules that is so evident, it’s a wonder it hasn’t been taken care of earlier. I have often wondered why the draconic bloodline has been neglected thus and this massive differentiation of the material is more than appreciated. Better yet, the themes of the respective draconic sires often feature unique and rather fun visuals that set the respective sorceror apart. This book is a godsend for campaigns wishing to play with multiple draconic characters, feuds, etc. and I’m certainly going to use it in Legendary Games’ upcoming dragon-AP.

Balance-wise, the abilities sometimes exceed that of the base draconic bloodline by a slight bit, but considering that it is not the strongest of options in the first place, I am good with that – the pdf should not provide any difficulties regarding balance, even when used in gritty campaigns. In short: Even the most hardcore gritty and restrictive of games should encounter no issues while using this pdf.

The revised edition goes the extra mile and not only updates the very few minor hiccups I found, but also expands the content further, making this a rewarding, cool and well-presented file. The design decisions make sense to me and the overall presentation of the material makes this, as a whole, a pdf certainly worth getting for the more than fair asking price. My final verdict of the file will hence clock in at 5 stars + seal of approval. Just one note: Fans of Bloodragers won’t get anything out of this file, but then again, there is always the chance of a sequel.

You can get this cool, now even further improved pdf here on OBS!