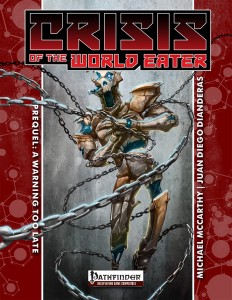 This prequel for the unprecedented Crisis of the World-Eater-saga clocks in at 14 pages, 1 page front cover, 1 page editorial, 1 page advertisement,1 page SRD, 1 page back cover, leaving us with 9 pages of content, so let’s take a look!

All across the world, an uncanny psychic scream echoes through the minds of the minds of the world, driving many individuals to suicide – and the trail leads to the irradiated Kray Wasteland, officially a hostile area broken by the impact of a meteorite. Major Marco Dempompa send the PCs into this wasteland – and it is here, the PCs find something they did not expect: Beyond the deadly gangs that inhabit the wasteland, the PCs unearth a strange, star-shaped complex – for from it, the scream was sent forth. They are not alone in their discovery, though – it is here that a secret super-soldier program was launched and three of these changed beings now have returned: The apathy-field generating arcanist Synapse, the unbreakable Colossus like berserker Vault and the Magneto-style elven storm sorceress Ozone.

Finally, beyond the locked down central section, the deadly quicksilver/flash-like Black Silver and the cabalists of the Onyx Cabal remain – and here, the PCs find the broken figure depicted on the cover, the chronicler – who has regained his strength to emit the scream…to warn the world of the approach of Saitan, the deliverer of Omega…before falling back into hibernation. I should btw. mention that the bosses/super-soldiers of this module, like bosses in Metal Gear Solid or superheroes/villains sport unique abilities that render them significantly more interesting than the sum of their builds.

It is with a sense of doom impending, paranoia versus the world’s nations and a player-friendly map of the complex that we end this first taste of the dread things to come…

Editing and formatting are very good, I noticed no significant glitches. Layout adheres to a printer-friendly, elegant 2-column full-color standard established in the surprisingly awesome “Chronicle of the Gatekeepers”-campaign serial, though with minor modification. The pdf’s artwork is original and absolutely stunning and the cartography is just as awesome. The pdf comes fully bookmarked for your convenience.

This brief module by Michael McCarthy, Jeff Lee and Louis Porter Jr. delivers in its promise – it makes me excited for “Crisis of the World-Eater” – even more so than I was before – the evocative backdrop suffused with exceedingly cool bosses renders this a great little module. Oh, and this one is “Pay What You Want” – which means there is literally no reason why you shouldn’t check out this cool little module. Personally, I do believe that it is worth a tip/compensation for the obvious care that went into it for the unique bosses alone. Seeing how this is PWYW, I can’t see a reason why this should not be considered to be 5 stars + seal of approval – an intriguing, first glimpse at the vast things to come.

You can get this cool module for any price you want here on OBS!