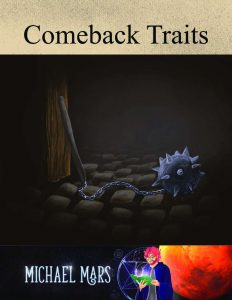 This is the review of the revised version – kudos to the author for fixing some snafus!

This pdf clocks in at 5 pages, 1 page front cover, 1 page editorial, 1 page SRD, leaving us with 2 pages of content, so let’s take a look!

Okay, so comeback traits are traits for people who hate failing; as the author explains, they are named after Strong Comeback and the pdf acknowledges the existence of exemplar comeback traits, with one provided. It should be noted that exemplar traits occupy both trait slots, but eliminates the usual 1 trait per category restriction that traits are subjected to.

The exemplar trait provided for comeback traits would be Certain About One Thing lets you 1/day instead of rolling an atk, save or skill check take 10. You may do this an additional time for every 2 other comeback traits you have.

The other traits do not have this issue, though:  A Little More Left in the Tank has been properly rebalanced and revised, and is now a neat kineticist option.

Accidental Flourish lets you 1/day when you roll a natural 1 on an attack and miss by 10 or mor reroll the attack. Solid. Duck and Weave is the same design-paradigm, but for saving throws. Not Nearly As Incompetent As I Look would be the skill check version, but its failure condition is 1 or failing a skill check by 10 or more.

Grazing Strike lets you 1/day ignore a natural 1 attack roll when the attack would otherwise hit, and deal minimum damage instead.

Just Breathe On it is a bit weird: Whenever you reduce an enemy to 0 or less hp in melee and do not kill them, they drop unconscious. Okay, that usually happens? What if the target has Diehard? Ferocity? This one still isn’t operational as written.

Conditional Success helps you negate natural 20s of enemies when they negate non-damaging spells or abilities, having them suffer the effect until the start of their next turn; usable 1/day. Really like it! Forceful Spells is one that I really didn’t like, but not due to design concerns, but simply because I can’t wrap my head around how this trait’s effects manifest within the logic of the game world: when you cast a damaging spell, if all targets avoid taking damage, one target instead takes force damage equal to the spell’s level. I get the design intent: Reliable, minor damage as a consolation; I just don’t see the logic within the magic system in the world. Your mileage may vary for this one, though.

That Should Not Have Hit lets you 1/day when an enemy rolls a natural 20 that would otherwise not have hit instead take minimum damage. I REALLY like this aesthetically, and it now also has a caveat that covers effects like e.g. vorpal weaponry and similar effects that trigger on a 20. Kudos for cleaning that up!

Frenzied Defense nets you a +2 trait bonus to AC and saves when you miss with all attacks in a full attack, but only against the targets of your full attack. Can see that.  Saving Grace lets you 1/day if you roll a natural 1 on a save, but otherwise pass, ignore the failure.

On Second Thought lets you retry recall information checks as a move action within 1 round of the first attempt. Nice. Once More With Feeling can be very powerful, but also extremely rewarding: A 1/day ability that fails to have an effect may be regained by becoming fatigued. I love this, particularly since the rules have been cleaned up further, now accounting for immunity to fatigue, etc.. Kudos!

Maximized Minimum lets you 1/day treat all rolled damage dice 1s as 2s. Rub Some Dirt In It is the healing version for channel/lay on hands. Solid. Pooled resources ties in all those pool abilities: When you spend 2 points on an ability and it has no effect, you are refunded one point. Nice. Rain of Arrows lets you reroll a ranged attack you missed against an enemy adjacent to an ally, with an equal chance of hitting each creature adjacent to the original target. Odd on a design level: This requires the permission of every ally adjacent to the enemy, which makes no sense in-game. I get it: It’s to prevent inner-party strife, but that sort of thing should not require rules. Heck, any halfway competent party can work with that. Perhaps I’m too hardcore there. Not a complaint, mind you.

Saving Magic nets you a spell’s level as temporary hit points when you cast a non-damaging spell and all targets negate the effect; nice: temporary hit points have a duration and the proper non-stack caveat. Slow and Steady Wins the Race is interesting: It nets you a +4 trait bonus to initiative, but only if you ROLLED lower than all enemies. Note the emphasis here, as the result is not what counts. Interesting, and due to its unconventional rules, not something one can cheese.

Training Trumps Luck, finally, lets you 1/day when an enemy rolls a natural 20 to avoid the effects of a damaging spell or ability that would not normally suffice, ignore that and instead deal minimum damage.

Finally, there is a new feat, Comeback Kid, which makes a 1/day ability of a comeback trait usable 3/day instead. The interaction with the exemplar trait is noted properly.

The editing and formatting, particularly on a rules-language level, has improved significantly: Kudos! Layout adheres to a no-frills two-column standard with some solid b/w-artwork familiar to fans of Frog God Games. The pdf has no bookmarks and needs none at its length, but much to my pleasant surprise, it comes in three versions: One for the PC, one for devices where HD-space is more important (smaller file-size) and one that is printer-friendly, omitting colors and artwork: NICE!

Michael Mars Russell delivers a rather intriguing array of traits here; traits are a difficult design space: One doesn’t have much room to maneuver in, and it’s easy to either be boring, redundant, or too strong; now, for the most part, this pdf does a solid job at presenting pretty open traits with a unified theme that I very much enjoy; the revised iteration has gotten rid of the majority of wonky bits, leaving only one instance where the functionality of a trait isn’t given.

The pdf is inexpensive, though, and this is the author’s freshman offering (apart from conversion work, which is a different beast); that does grant this a bit of leeway. The revised edition is a significant improvement in almost every way, which means that the final verdict will be upgraded to 4.5 stars, rounded up in spite of the one remaining minor hiccup.

If you enjoy my work, consider leaving a tip via paypal, or joining my patreon here.