Campaign Kits: What Lies in the Shadows Under the Trees

Campaign Kits: What Lies in the Shadows Under the Trees 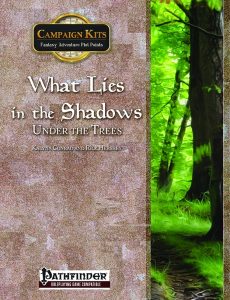 This installment of the Campaign Kits-series clocks in at 26 pages, 1 page front cover, 1 page editorial, 1 page SRD, 1 page advertisement, 1 page back cover, leaving us with 21 pages of content, so let’s take a look!

This time around, the encounters contained here will range from level 1 to level 6 and have not hub to tie them together – think of this instead as a general sidetrek-encounter-collection. Got that? Great!

In order to go into more details, I have to start with SPOILERS now…thus, potential players should jump to the conclusion.

Okay, only GMs around? Great! The first locale/encounter-sequence takes place in an ancient fey burial site and features the altercations with a leaf ray and a jack-o’-lantern, with options to put the spookyness to rest. At level 2, we have a little safari scenario that can result in an evil druidic item to be found and destroyed. The second level 2 scenario presented here focuses on defending a caravan versus roving goblinoids.

More interesting would be the level 3 encounter up next, which is an interesting twist – the PCs encounter a man who asks them to help prevent further disappearances of loggers; what might first look like an opportunity to save a damsel in distress…who turns out to be a rather pissed off dryad who is NOT in a good mood…including her enslaved humanoids and assassin vine…

The next level 3 encounter would be a hunting party scenario, complete with traps and moss trolls potentially trading places as hunters and hunted in the interaction with the PCs. The next encounter does have a sad dimension to the proceedings – the PCs happen upon a down on his luck ringmaster and the tiny, dilapidated circus he owns…and, as they take a closer look, they are attacked by the unleashed beasts, as the sad ringmaster tries everything to feed his hungry dire wolverine, owlbear , etc. – if you enjoy a melancholic downer-encounter once in a while, this certainly delivers.

The encounter for level 4 would be “Don’t Open the Gate!”, where the PCs stumble upon an evil acolyte trying to open the very gates of the abyss, conjuring forth demons – pretty straightforward. The level 5 encounter centers on the plight of a druidess, who has a bug-issue, powered by the evil magics of a hostile witch – an extermination job for pros! At 5th level, the PCs can also be hired by saddened folks who think that local brownies have turned evil – though the culprits for the recent deaths, as it turns out, would be fire drakes.

The level 6 encounter speaks of a mist-shrouded tower in the forest and braving the locale will require the defeat of a wood golem as well as the besting of Twigsnap, gnomish necromancer par excellence. As always, we get stats for the creatures and NPCs encountered in the respective encounters.

Editing and formatting are very good, I noticed no significant glitches. Layout adheres to a very nice, aesthetically-pleasing two-column full-color standard and the pdf features some really nice full-color pieces. The pdf comes fully bookmarked for your convenience.

Kalyna Conrad’s collection of forest encounters is fun, diverse and hits some nice notes in some of the respective encounters. Not all are mega-interesting, but for what they try to do and the relatively fair price-point, I can see these work as an expansion for the sidetrek-folder of most GMs. I generally like the options here and they certainly are worth the low asking price for the convenience of the stats, the set-ups, etc. – hence, my final verdict will clock in at 4 stars. Nice one!

You cna get these woodland encounters here on OBS!