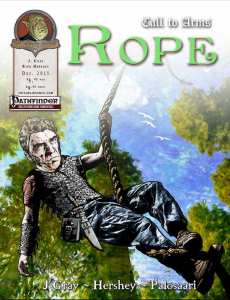 This colossal installment of Fat Goblin Games’ Call to Arms-series clocks in at 68 pages, 1 page front cover, 2 pages of editorial, 1 page ToC, 1 page advertisement, 3 pages of SRD, leaving us with 60 (!!!) pages of content, so let’s take a look!

After a brief page of flavor text, we dive into a brief history of ropes and how they’re used – the first thing you’ll notice when thinking about ropes and their use is that, much like fire, the PFRPG-system isn’t that precise regarding the peculiarities of the respective ropes – when applicable, the pdf reprints rules, clarifies them and expands them…so the first thing you’ll notice is a huge selection of different masterwork ropes – from cave fisher cords to bloodvine ropes to hemp and cord lisse ropes, a massive table alongside various entries provide material that made me grin from ear to ear – beyond varied prices, the table provides effective rope strengths and maximum loads for rope types (including yarns and vines and the like), hardness-ratings and HP alongside weight in one massive, handy table – a glorious GM-cheat-sheet and a portent of the things to come – now you know whether the cave fisher cord can keep that fully armored dwarf from falling…and yes, somewhat elastic ropes can also be found in this section. Oh, and yes, improvised ropes in various qualities complement this array. How useful this is only becomes apparent in game: You have the answers to questions à la “Can I secure XYZ, can I rip door W with a rope from the wall?” suddenly without any hassle.

Beyond that, the pdf provides rope accessories -from balancing poles to bell nets, butterfly nets to climber’s kits and pears up to double ring descenders, foaming nuts…and pulleys. Instead of the default block and tackle system, a short and simple, yet effective block and tackle system utilizing these is part of the deal. Soldier’s belts and bracelets that can be taken apart and spider sacs can be found in this book and we also receive 4 types of mundane rope armor as well as notes on rope-based weapons like the aklys, bolas, monkey hammers etc. – all collected here for your convenience…and yes, including rope gauntlets and throwing arrow cords. A total of 10 balanced traits helps you portray characters that know what they’re doing, who have experience with the subject matter before being roped into the adventuring profession. …sorry for that one, couldn’t help myself. And yes, that pun was bad, even for me.

Feat-wise, an option to use two-handed weapons while climbing and a vastly improved, a more versatile Equipment Trick (Rope) that includes an option for an improvised flying blade-type weapon (think: rope + horseshoe…) among the many options provided. Several feats that makes Lassos more viable as well as reprints of the Net-enhancer-feats complement a neat section here. Have I mentioned the jury-rigging feat here?

Archetype-wise, the pdf reprints the buccaneer and we also get the improvising engineer rogue, who gets a chaotic, scaling bonus when using juryrigging to provide tools for the job at hand alongside better pioneering. (More on that later!) Interesting! The Escape Artist bard gets several Houdini-style low-level tricks. I also was rather happy to see the Trapper ranger redesigned – traps at 1st level instead of 5th and expanding special tricks to modify them make the archetype more interesting (and different from level 1 onwards) as opposed to the default. Kudos! The Vaquero cavalier order would be the lasso specialist – and no, haven’t seen that one before.

Skill-wise, we also get an expansion to the rope-rules – from capture and torture to belaying or combat rappelling, we get quite a bunch of neat expansions; even ropeburns are covered! Code-knitting? Covered. Knots and nooses? Covered. Pioneering? Poi? Basically medieval bungee jumping? All covered. Want rules for lethal rope-skipping for that nightmare sequence? Just add blades to the rope-skipping rules herein. Or want to tightrope walk? Rules provided. Zip-lines? Covered. This section is gold – not necessarily as a collective, but there is so much customizable material here, it makes utilizing ropes significantly more compelling…for all kinds of activities.

Spell-wise, improved, more powerful versions of animate rope are provided alongside the classic spell; a nasty spell that stitches the lips of the target together is evocative and making a simulacrum-style double from twine is similarly intriguing. The pdf also, obviously, provides a collection of magical ropes, both new and old – but the truly intriguing component, at least to me, is the array of rope special qualities that can be added to your magical weapons – whether a rope staff or an uncuttable rope is what you desire, this toolkit makes sure that magical ropes can be customized in a wide variety of options. Specific magic item-wise, thread can be used in embalming to increase the potency of flesh golem or zombie DRs, while fans of Sam and Max may finally crush foes below giant balls of expanding twine. Beyond cursed ropes, the intelligent and malign hangman’s noose lasso and a golden wonder woman-style lariat of honesty complement this section. Mythic item-wise, the potentially death-cheating thread of fate and the deity-attuned heavenly rope are solid. Artifact-wise, we get two this time around: None other than friggin’ Gleipner and the String of Theseus – and yes, gleipner can only be used once…but its effects have no weasel out clause.

The pdf also covers rope hazards and reprints e.g. rope golems and sports the rope-mimicking twisted strangler aberration as well as concise rules for crafting ropes, including unbraiding, fiber artistry and the like. The pdf goes one step further in the appendices, though: We are introduced to perhaps the crown achievement of awesomeness here: Pioneering projects: These allow characters to use ropes and other materials (noted in the respective entries) to create tables, treehouses and similar improvised structures – glorious and absolutely awesome for wilderness campaigns! Stranded on an island? Use these ropes. Survival in the wilderness? Use these rules. Want to trailblaze and establish a new settlement, beginning with rickety basics before getting people to join you – bingo.

Editing and formatting are very good – I noticed no significant glitches. Layout adheres to fat Goblin Games’ two-column full-color standard and the pdf sports a nice combination of fitting stock art and some original pieces. The pdf comes bookmarked with a massive array of nested bookmarks for your convenience.

I’ve read quite a few of J Gray’s supplements so far and, in my opinion, none have so far reached this level of quality: On par with line-developer/editor Lucus Palosaari’s best in the series, this book is a true blessing and joy to read.

The rope variants and vastly expanded options allow the enterprising GM and group to play completely new types of adventures – whether underworld explorations down bottomless chasms or hardcore wilderness survival in hostile terrain, the pulley and pioneering rules in particular are a boon for campaigns that seek something different. Heck, the pioneering rules can arguably be used to play a whole campaign or at least low-level sequence of modules. I certainly know I’d run e.g. Kingmaker sans settlement, just with characters with these tricks and NPCs to teach them to.

This book made me want to write an adventure based on climbing down a vast chasm/scaling a mountain, of running a truly pioneer-style campaign with goals like lassoing fantastic beasts and similar objectives. Want to play a wild-west-ish campaign? Get this. Want to properly play a DIY-pioneer or rope-based circus artist? Get this. This is one of the books you don’t realize that you need it…until you read it. Particularly simulationalist groups and GMs that emphasize resources and a sense of realism will absolutely adore this book. The one gripe I can vocalize against this pdf is a didactic one – putting the pioneer/block and tackle rules in the appendices at the end rather than before e.g. an archetype mentions a bonus pertaining them is a bit counter-intuitive. Yeah, that pretty much is it.

I really love this book and the options it provides, the means by which it expands ropes as items both mundane and magical. This is a great addition to one’s game and well worth a final verdict of 5 stars + seal of approval…and guess what? The sheer added options regarding rope-based structures and wilderness survival are very near and dear to my heart…which is why I also nominate this as a candidate for my Top Ten of 2015. Congratulations!

You can get this unique, extremely useful pdf here on OBS and here on d20pfsrd.com’s shop!