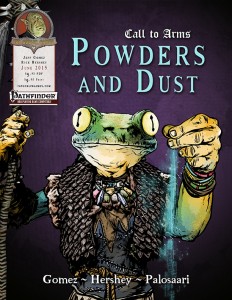 This installment of the Call to Arms-series clocks in at 30 pages, 1 page front cover, 1 page editorial, 1 page ToC, 1 page SRD, 1 page advertisement, 1 page back cover, leaving us with 24 pages of content, so let’s take a look, shall we?

We begin, as has become the tradition with the Call to Arms-series, this supplement with a brief piece of in-character prose as well as a well-researched piece on the history of warfare regarding the particular instrument of destruction at hand – this time prefacing the whole book with the best-known quote of one of the most influential and, in my opinion, best epic poems of all time, T.S. Eliot’s “The Waste Land” – for which I btw. encourage the scholars among you to get the Norton Critical Edition…but that just as an aside.

The interesting component here is that the pdf talks about uses of mundane, non-lethal powders in battle, namely the practice of blinding opponents via e.g. the Dirty Trick maneuver, recapping the whole process in a concise and well-presented manner before diving into new alchemical means of dispersing powdery death, beginning with something that may well become a trademark trait for books crafted or developed, at least partially, by Lucus Palosaari – the moment where you say “Why hasn’t this been done before?” This time, said moment came to me via the concise rules for dust explosions (historically btw. a reason for the strict policies and location-guidelines assigned to the craft of Baker in the middle ages). Seriously, I’ve used and hand-waved the like for ages and seeing actually, proper and well-crafted rules for this component made me grin from ear to ear. Flash Powders as employed by ninjas, stink bombs (here called ghast retch flasks), itching and sneezing powders and bamboo-tubes to disperse poison-laced sands in short-range cones complement an interesting introductory field to the matter at hand, thankfully including the respective alchemy-DCs.

There also are 6 powdered poisons herein, from the known Ungol Dust and Dark Reaver Powder to new ones like the calcifying powder or the confusion AND feather fall-inducing faerie dust (which is, uncommonly, resisted via Will, not Fort) that can be sued offensively and defensively, the powder-based toxins are interesting and I appreciate the reprints for the sake of completion of the already established powder-based toxins. This practice also extends to non-offensive powders like Foaming Powder or Casting Plaster, just fyi since I will no longer explicitly note their presence herein.

So these would be the straight and offensive powders – but things, at least for me, become truly interesting once you take a look at the utility-based alchemical and mundane powders like alchemical cement, an anti-hangover draught or the lock/traps-corroding rusting powder that provides a significant bonus, but at the expense of potentially triggering traps/ruining locks. Climb and Escape Artist-enhancing talcum powder also can be counted among the more interesting goods to be found herein…and yes, there are rules for thermite and weapon blanching powders, of which the adamantine one, at 100 GP, imho is severely underpriced and requires a higher cost.

Also rather interesting: The notion of creating so-called dustbound weapons – weapons crafted from powders, sands and the like at 1/10th of their price…but which also fall apart on the first critical miss. And yes, ammunition and similar one-use weaponry cannot be fashioned from dust, preventing the obvious abuse I’d have expected such an item type to produce. Dust-themed magic weapon abilities are also introduced, with the handy table at the beginning falsely calling Sand Spray weapons blinding in a minor typo that is nevertheless annoying. These weapons btw. add bonus slashing damage on critical hits and also have a chance to blind adversaries – though the chance to blind foes is bought with a reduction of bonus damage die-size from flaming/corrosive/etc. burst‘s d10 to d8 – which seems okay to me, considering the low DC for the blinding effect. Similarly, the dust-cloud ability that can “on command” make a piercing or slashing weapon deal bludgeoning damage instead is cool – but the activation action would still be appreciated here.

The natural armor destroying abrasive quality that reduces natural armor on critical hits may not look like much at first glance, but in the hands of the right character, it can be truly devastating – not sure whether I like that one and its implications for dealing with dragons et al., but that may just be me. Pretty interesting: A scimitar that sprays sand with each swipe, but which can use this sand to 3/day extend reach to 20 ft – pretty awesome imagery…though the item fails to specify an activation action. Similarly problematic – the Dustform Dagger, which dissolves into dust and can be conjured forth from dust as a move action. “All enemies are flat-footed to the next attack made with the dagger that turn.” – so…does that mean the wielder needs a free hand? Does the wielder have to draw the dust to generate the dagger? Usually, if a foe has fallen prey to this trick once, similar items grant a span of immunity to prevent spamming of such a trick…I like the idea of the item, but, alas, the execution is pretty flawed.

It should be noted that the issues pertaining these specific magic weapons do not extend to the well-crafted specific dust armors also presented within these pages. Obviously, though, the best-known dust-type would be the wondrous dust, of which some new ones – including e.g. dust that subjects plants affected to rapid growth. In this section a Bedouin’s veil that helps promote the saves versus the respective dusts, sands, poisons can also be found, including an invisibility-AoE-escape dust and pouches that can be used to conjure forth blasts of sand and the like are also part of the deal – thankfully with precise rules-language.

The book also sports multiple interesting cursed items and some rather interesting ones: To give you an example: Yes, there is actually intelligent dust (formerly a powerful vampire) and there are two mythic dusts to be found within these pages as well. At the highest power-level, there are two different artifacts, both of which are pretty neat. The pdf contains a ki-based blinding bomb ninja-trick alongside 3 different new feats pertaining, including a means of creating dust-based versions of spells (where the rules-language, frankly, needs to be much more precise to actually work) as well as the option to enhance dirty tricks and imbuing sands with touch spells.

The pdf then closes with three rather cool dust-based diseases, though one has some minor formatting glitches, that, however, do not impede the ability to understand the respective file.

Editing and formatting are good, though there are quite a few minor glitches contained herein. Layout adheres to Fat Goblin Games’ beautiful two-column standard with some neat artworks interspersed with nice artworks. The pdf comes fully bookmarked for your convenience.

Author Jeff Gomez has crafted a more than solid installment of the Call to Arms-series in Fat Goblin Games’ oeuvre and while it falls short of the more refined recent installments penned by some other authors, Jeff, with editorial help from Lucus Palosaari, has ultimately crafted a fun equipment book, of which I will take quite a bunch and introduce it to my campaigns – the new material is neat indeed and, while I honestly wished this was longer, I found quite a few pieces of great material herein and actually appreciate the intention of providing the definite dust/powder-weapon-tome. At the same time, the rules-language in some cases is less precise than what I’m accustomed to, with some items not sporting the correct activation actions. While there are relatively few such issues, they are here nonetheless – and, quite frankly, would weigh heavier on the final verdict of the book, were it not for some truly brilliant gems herein that made me smile from ear to ear, inspiring stories and encounters even while I was reading this book. Particularly alchemy-heavy low-magic/rare-magic campaigns will undoubtedly consider this book a treasure-trove of pretty awesome material! Hence, in spite of its flaws, my final verdict will clock in at 4 stars.

You can get this nice equipment-book here on OBS and here on d20pfsrd.com’s shop!