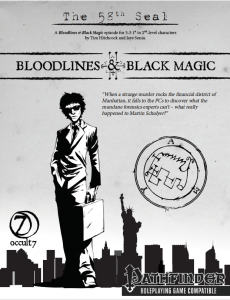 The third episode for Bloodlines & Black Magic clocks in at 28 pages, 1 page front cover, 1 page editorial, 1 page SRD, leaving us with 25 pages of content, so let’s take a look!

The adventure is intended for 3-5 2nd level characters, and is set in NYC; as we’ve come to expect so far from BL & BM, the module features read-aloud text, and also, where appropriate, degrees of success and failure in skill checks etc., making for a rewarding design paradigm. Important dialogues and skill results have text phrased for you, making the running of the module smoother for GMs not as experienced in paraphrasing text spontaneously. As a nice angle, there is a potential connection to Episode 1: The Unloved Ones as one of the optional plot hooks. The module does have support for tables using the Tarot, and additionally, we have, as before, suggestions for songs to be played in the background to enhance the scene. Love that!

All right, as always, this is an adventure review, and as such, the following contains SPOILERS. Potential players should jump ahead to the conclusion.

The phone rings, and tells you to turn on the TV – you see a report on the death of Dutch financier Martin Schuyler, who seems to have burned to death in his 58th floor office. Mysterious enough? Heck yeah! The module proper begins with arriving in NYC, which also includes a meeting the locals table that lists organizations/beings you can meet/gain as connections, or simply interact with. The first scene has the PCs interview Schuyler’s employees, taking a closer look at the outer office as well as the respective people: Secretary, economists, etc. – this scene also has a means to introduce the amazing Lords in Glass’s Shadows, should you choose to do so.

The investigation will yields some rather strange clues – including the fact that there have been other, similar fires before, all across the globe. By the way: Soundtrack for investigating the inner office: (Don’t Fear) The Reaper by Blue Öyster Cult. Awesome. This fits perfectly – it’s a per se grim scene, and the macabre lyrics and upbeat song add a surprisingly Twin Peaks-esque touch to everything. The book also retains the in-game logic: With the appropriate lifepath, you can e.g. realize that the fire-extinguisher was tampered with. It’s a small thing, but whenever a module does not explain such things with “Magic did it”, I smile a bit. 🙂

Indeed, guess what: From all the stuff listed here, the PLAYERS can deduce the password to Schuyler’s blackberry. Yes, the thing can be brute-forced as well – but how this sets up the password puzzle? Pure awesome. It makes sense and makes you feel like a detective.  Unbeknown to the PCs, the fully mapped place will soon be assaulted by skulks! So combat is looming as well, meaning there won’t be time to get lost in details. Regarding the map featured here: It’s b/w, pretty detailed, and player-friendly! You can just print it and hand it to your players.

Either way, at the conclusion of this scene, it should be clear that Schuyler’s death was no accident, but rather the result of his involvement with a globally-operating occult organization….and only two members remain. That being said, the module does btw. account for seeking out Schuyler’s corpse! A constant, looming threat is also presented in a rather neat manner here, and allows the GM to spice things up, if required.

But back to the matter at hand: The two survivors are Moira Scot, and Rishi-Akarsh Durvasa, the latter having gone underground – so warning Moira might be wise…and here, we have another cool way to highlight the module’s strength: The villain has not one, but two plans to eliminate here – and they need not be foiled….either way, it’s time to get the hell out and board a flight towards India!

The PCs ultimately have to find the village where Rishi has gone into hiding here, and once they get there…well. India may be rich in magic, but Mayong? It’s steeped in necromancy! Thus, the PCs will have to best Pranav of the Children of Kali-Ma in psychic duel – and in a cool twist, the Kali-Ma worshipers are actually not the enemies of the PCs! The village is hiding Rishi, who proceeds to fill them in on what has gone before: The son of one Helmut Agrippa (yep, that family!) seems to believe that he has found an invocation by deciphering the 58th seal, allowing him to bind and control a daemon. Helmut died soon thereafter. Put 1 and 1 together…ouch. The Esoteric Order of the Sacred Seal has a pact with a daemon called Amy, an entity that has a truce of sorts with the order…and once the last member of the order is killed, the contract is voided. Amy is freed.

Yep, guess who’s the dumb dupe of a very powerful daemonic force? Pieter, the young “master” occultist! (This is a great angle – think about it: How often is not malignant intent, but sheer incompetence, the source of suffering? That paired with hubris? Great villain set-up!) All of this known, the PCs will have to return to NYC, and confront Pieter – preferably without being slaughtered by Amy! And yes, in the aftermath, clever PCs can become scandalously rich – but only in mundane funds…

The pdf also features a write-up of the The 58th Seal as a cult, a handout-style depiction of Schuyler (cool!) that you can give your players, and explanation of Pieter’s psychology,  how to handle money, and 5 suggested sample oddities.

Editing and formatting are good, I noticed no serious snafus on a formal or rules-language level. Layout adheres to the series’ two-column b/w-standard, with neat original b/w-pieces used throughout. The presence of a handout and a map that’s player-friendly is a big plus for me. The pdf comes fully bookmarked for your convenience.

Tim Hitchock, with development by Jaye Sonia and additional design by Clinton Boomer, delivers something rather impressive here – in just a few pages, he weaves a compelling and genuinely interesting mystery. While not as straight-forward in its horror angle as the previous episodes, I think that the module is better off for it in this instance, because it thoroughly embraces the mystery/investigation-angle! The scenes are clever and make you feel like you’re, you know, investigating the occult; they reward player-skill over just rolling well, and I really like the villain motivation, the plans, the multiple routes they have to success…in short, this delivers in amazing ways, particularly considering its brevity! This is well-rounded, knows its scope, and just executes! My final verdict will be 5 stars.

(As a final aside: If you’re willing to do some tweaking, statblock-crunching, and working on the plot this imho begs to be fused with the Esoterrorist scenario “For the Love of Money” – FtLoM suffers in the beginning and at some transitional places, and using this module as a guideline there is a neat way to fix this; plus, with that combination, you could expand this to mega-module lengths. Just sayin’…)

The Esoterrorists-scenario I mentioned can be found here!