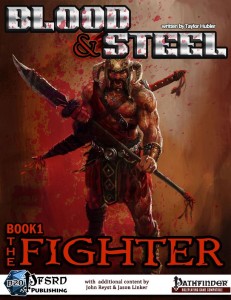 The first archetype herein would be the Beast Hunter, who replaces medium, heavy armor proficiency and tower shields with bola, lasso, mancatcher and net and also actually make these subpar weapon choices rather valid with increased range, concentration DCs of those caught and even capture larger adversaries – the archetype and its focus on catching creatures via uncommon weaponry is AWESOME. It’s simple, elegant and nice. Personally, I would have preferred more tricks here or some special talents, but the archetype is more than functional in that it provides options for a build previously unsupported.

The Gun Fighter, the second archetype herein, can be considered a type of gunslinger light – more realistic and down-to-earth: No deeds, no faster reloading etc. – a working fighter with firearm focus, if not a perfect one – for groups looking for a more low-powered approach to firearms, the archetype definitely works – so design goal achieved.

Third would be the harpooner, taking a new take on the harpoon (complete with entangled foes, penalty on subsequent attacks etc.) and making a weapon specialist for it – further penalizing foes, cover by water, tying off harpoons at higher level to keep hands free – a cool specialist archetype overall, though one that could use some drag-combat maneuver love…still, won’t hold that against the pdf.

The Highborn Fighter, essentially the niche that the cavalier was supposed to fill, can also be filled by archetype of said name – beyond proficiency with sword-canes et al, these guys use cha instead of dex to calculate ref-saves etc. – and would also receive cha-bonus to damage. And here I’d be complaining, were it not for the smart decision to scale the maximum bonus. Nice and definitely something I’ll scavenge for talented classes etc. Kudos!

The Iaidoka Master is a master of feinting and quick first attacks – solid one, but somewhat lacking in the department that provides truly unique options. The Navaja is also a little archetype, but a great one – specific weapons, mostly subpar choices like daggers, can benefit from increased damage output and the navaja may stick knifes in foes and let them inside to accumulate debuff-effects on the pincushion’d foe.

The Siege Engineer is a must-have in war-themed campaigns and a great option as a cohort – as a master of the truly big weaponry, The biggest achievement here, though, would be that played a siege weapon master isn’t boring – the option to be more efficient and commandeer multiple siege weapons makes for rewarding gameplay even for PCs. While surely not perfect for every campaign, it is awesome for some and quite probably worth the whole book if you’re looking for a character like that.

The thrower is a throwing specialist archetype that gains increased reach and damage output to offset the base weapon’s. While I’m not big on ranged combat maneuvers, 15th level is sufficiently late to not make this an issue. Okay, I guess.

The final archetype would be Wicked Wrecker, a specialist in using armor spikes and bull rushing/grappling foes to smithereens and even cobble foes with those moved away via bull rushes – again: Cool option for an underutilized weapon-type.

A total of 19 new feats can also be found within these pages – changing direction when charging, bola feat tree (including flight-impeding bolas that temporarily can send foes crashing down), bracing against foes that have moved 10 feet (not only against chargers), making sundered armor truly impede their wearers, damaging adjacent structures faster drawing of hidden/concealed weaponry, better saves versus identified spells or what about increased chances to perceive foes while sleeping – quite an array of interesting feats are assembled here.

Beyond these feats, we also get weaponized parasols, aforementioned harpoon that actually works and lantern shields make for neat mundane items, while a collection of 12 magical items, from dimensional bolas to mud bombs and anti-object grenades add nice notes.

In the spirit of 3pp-camraderie, some great excerpts from 101 Magical Armor and Shield Properties and 101 Magical Weapon Properties by Rite Publishing are provided as a bonus.

Editing and formatting are very good, I noticed no significant glitches. Layout adheres to a neat 2-column full color standard with thematically fitting stock art. The pdf comes hyperlinked and bookmarked for your convenience.

Taylor Hubler, John Reyst and Jason Linker deliver a book full of highly uncommon fighter niche builds – and they work. And they are cool. I was honestly surprised, but this book actually proved to be rather cool, offering some unique and fun options I’m sure to use in the future – and sometimes, like in the case of the Navaja, the concepts even are downright awesome and deserve accolades. That being said, at the same time, there are a few archetypes herein that don’t have that much going for them beyond their gimmick, which is a bit of a pity – just about every niche-weapon-style just asks for more tools, more abilities etc. – and that’s a GOOD thing here – it means the basic archetypes do a good basic job, one that can be expanded in future releases. The content herein inspires to create more, to make the individual basic systems of the archetypes even more diverse -and that is an achievement indeed. Making harpoons, dagger-fighters etc. NOT suck is a neat achievement for this humble pdf. I did not expect this pdf to be as compelling as it turned out to be – after so many fighter-supplements, it’s hard to provide something new and this one zooms in on many fringe-cases and options and makes them better – and for that, this pdf, in spite of some archetypes not being that interesting, has a majority of options that are downright cool. Hence, my final verdict will clock in at 4.5 stars, rounded up to 5 for the purpose of this platform.