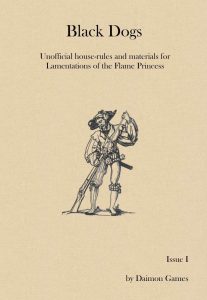 The first issue of the Black Dogs-zine, intended for LotFP-rules, clocks in at 47 pages, 1 page front cover, 1 page back cover, 1 page intentionally left blank, 2 pages of editorial, 1 page ToC, 1 page introduction/credits, 1 page SRD, leaving us with 39 pages of content, which are formatted to adhere to the classic 6’’ by 9’’ standard.

Now, this differs in a way from most ‘zines you can find out there, in that it presents pretty much a hack/mode of play for LotFP, basically supported by houserules etc. In a way, one could argue this to be the first book of a sequential presentation of a setting.

As such, it makes sense that we begin this pdf with a summary of differences regarding setting assumptions. First, one should be cognizant that the Black Dogs mode of gameplay assumes a setting that is based on our earth, but slightly earlier than LotFP’s assumption of basically the early modern period. We’re talking, in essence, about the very end of the medieval age, with all that entails – in cities, the first breeze of freedom wafts around the noses of city-dwellers, while the chokehold Christianity had on the populace is slowly but surely undermined. The contrast of cities vs. rural areas, and more pronounced, the wilderness, is tangible. It’s a time of change and transition, where firearms and the new warfare exist side by side with classic knights and the respective forms of medieval Weltanschauung. This is per se an interesting premise, though one that is not that radically different from what LotFP offers per default. Something that galled me slightly would be the lack of notes *when* exactly we’re supposed to assume the game to take place. While precise chronology is not required in a fantasy setting, one of the big plusses of setting a game in a variant of earth lies, ultimately, in being able to draw on a detailed and rich historic background, something that becomes harder to pull off precisely when you do not have precise dates to go by.

Rules-wise, the system makes use of e.g. 5e’s advantage and disadvantage mechanics, and takes a cue of sorts from DCC’s funnels, but extends it. Each player is assumed to control multiple characters, two to be precise, with the GM similarly controlling two GM-PCs, with some picked for any given adventure. This, obviously, means that there will be more character-management up front, but it also means that PC-death is bound to be somewhat less jarring. The relatively rules-lite framework of LotFP also means that less of a strain is put there on the PCs. An important restriction here is somewhat akin to that in Darkest Dungeon – you need to alternate between characters. You can’t just run one character through all sessions. A brief, basic no.frills one-page sheet for new recruits is provided.

The pdf notes upcoming differences regarding the Black Dogs setting/game and similar hacks, noting different score system, another encumbrance system (pretty interested in that – LotFP already does a rather impressive job there, as far as I’m concerned), etc.

But what are the Black Dogs? Well, think of these folks as a kind of informal organization of monster hunters, often feared by the general public. The PCs are assumed to be part of this order, not longer in service to the church or any higher authority, fighting to protect an ignorant and often hostile public from the darkness that learns in a mostly untamed and harsh wilderness. They are, in short, monster hunters, ostensibly good, but it may well be a matter of time before they succumb to corruption…

Now, I’ll be honest, this resounds with me tremendously. My longest-running campaign, which did span more than 7 years of weekly play, focused pretty much on that idea, save that my PCs were members of an organized church that kept the ignorant public unaware of the extent of magical powers, I used complex, rules-heavy systems and focused on questions of humanity regarding growing power, about religious strife, the notion of ignorance vs. knowledge, etc. In short: The premise resounds with me. A similar way to think about Black Dogs, would be to assume the group to operate as a part-equivalent to the solitary fighter/mutant assumed in e.g. the Witcher-franchise. Or, well, to consider this to be a means to blend the aesthetics of Warhammer with LotFP, with e.g. the parallelism of medieval and early modern aesthetics immediately reminding me of that game. There are some differences, obviously – beyond IP-related, obvious components, the invention of Gutenberg’s moveable type would be one important factor, though literacy, obviously, is still a scarce thing.

The pdf explains the role of the Black Dogs in the setting, how they’re perceived, etc., before providing a bullet-point summary. While this is helpful, I still maintain that properly placing the game in a chronological context would have made sense.

On a rules-level, we get 3 secondary scores, which range from 1 to 6. These are Luck, Talent and Saves. You can burn a point of Luck to reroll a roll. Talent allows you to burn a point when reaching a new level, increasing the related ability score or the related Save. The presentation here is a bit obscure, mainly due to the pdf not specifying a uniform rules-language term for ability scores. The secondary attributes mentioned are applied for EACH of the classic six ability scores. You thus have Luck, Talent and Save for each of the 6 ability scores. You roll 6d6 and may apply these freely, but you may NOT apply 6 to a Save value. After that, for every ability score, you roll 2d6. This means that you have to assign one number to each of the ability scores, which is not readily apparent. These then fill up the rest, with Save getting the lowest value, followed by Talent.

Ability score modifiers range from +3 to -3, with 9 -12 being the +0 range. This is, oddly, noted AFTER the secondary ability scores, which may come off as needlessly confusing, since these apply to the classic 6 primary attributes.

As you can glean from the presentation, save scores behave more like in 5e than the regular OSR-games in that they are assigned to ability scores. However, you roll a d6 equal or under the save score related to the attribute in question. 6 is an autofailure, and a save score of 6 nets you advantage on the respective save. Ability checks are roll under ability score with a d20. While I get the rationale for the design decisions here, I couldn’t help but feel it to be odd that saves now are directly tied to attributes, but attributes don’t really influence them. They are neither disjointed, nor connected in a linear manner, which makes them feel a bit weird to me. The ‘zine may develop that further in the future, but right now, I fail to grasp the benefit/improvement.

The ‘zine then proceeds to present an introductory adventure, situated in Flussburg, a German village. As a native German, I can say that the name is plausible, translating to “Rivercastle/burg”; I don’t know a place with that name, but nomenclature-wise, it makes sense. The village (fully mapped in b/w) is presented in a brief summary, noting the need to repair an Imperial bridge as well as the desire of a local clan of powerful Smiths, the Schmieds (which literally means “Smiths” – btw. how many of our family names came to be!) hoping to improve commerce and their situation in town, i.e., gain more influence. Small eyes and big hands are directly correlated to ability score traits, i.e. high Strength and an inability to grasp plotting/scheming, as well as clearsightedness. Whether you like that or not depends on your preferences.

Now, the module presents the clan and its agenda, as well as the village, in a per se clear and concise, sandboxy manner. The local happenstance are complicated somewhat by the presence of a cadre of dangerous beings (with a nice Achilles’ Heel to exploit) and the place also has a weird phenomenon to exploit, adding a second layer of complications to the proceedings. The sequence of events is depicted by faction, if you will, and timelines. The adventure provides full stats for adversaries featured within, as well as for a unique and disquieting “creature” of sorts, which further drives home the strangeness of the Wild. This creature is only featured regarding a random encounter table that supplements the module. All n all, this is a per se solid introductory adventure, that shnes primarily regarding its weirder components. The village of Flussburg, apart from the key NPCs, does remain a bit pale as far as I’m concerned, though. The module does not sport read-aloud text or a synopsis, but does have a couple of sentences to paraphrase.

Editing and formatting are per se good on a rules-language and formal level, but both categories suffer from the organization of the material being somewhat counterintuitive. The sequence of rules-presentation and setting-assumptions as a whole feels less cleanly structured than it should be. Layout adheres to a no-frills 1-column standard. Artwork is thematically fitting public-domain art for the most part. There are a couple of one-page b/w-pieces of e.g. a tree and the like – these are not aesthetically-pleasing, eat a lot of ink/toner, and one of them is horribly pixilated. Considering that there are 4 of these, I’d have preferred none/more content. The pdf, puzzlingly, lacks any bookmarks, which makes navigation needlessly complicated. The cartography is the aesthetic highlight here, but unfortunately notes the territory of the monsters, which means that it can’t be used as a SPOILER-free player-map. A map sans key/notes would have added value here. I can’t comment on the virtues or lack thereof of the print version.

Davide Pignedoli’s Black Dogs tugs at my heart’s strings. It hits a lot of the right tunes and presents, in essence, a more dark fantasy-like approach to LotFP, which, theme-wise, is something I can totally get behind. Black Dogs has a ton of potential, but leaves me, as a reviewer, in a tight spot.

On one hand, the book manages to present some interesting deviations from LotFP’s basic rules. On the other hand, since this is not the entirety of the rules-tweaks/houserules, it’s hard to objectively judge the merit of these deviations or lack thereof. While I for example like the notion of the secondary attributes, the rules-language regarding the respective nomenclature and sequence of presentation could be tighter. Additionally, judging just from the material presented herein, I so far fail to see the reason for them. This feeling of being incomplete, system-immanently, also extends to the small rules components: LotFP for example does not have versatile weapons. While a somewhat cross-system savvy reader will understand what’s meant, this generally makes the rules-aspects less useful for immediate use.

Now, chopping apart a system of houserules is hard; I get that, but at the same time, this feels like the presentation could be somewhat streamlined. The ‘zine, in short, is an interesting first sojourn into the world of Black Dogs, but it is one that does not stand as well on its own as it probably should. That being said, this pdf is available for PWYW, which allows you to easily determine for yourself whether you’ll enjoy what this offers. My final verdict, taking this and the freshman offering bonus into account, will be 3 stars.

You can get this ‘zine here on OBS for PWYW!