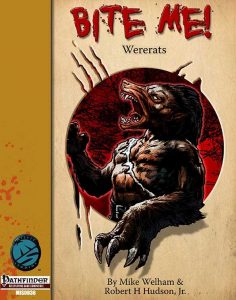 This installment of the Bite Me!-series clocks in at 27 pages, 1 page front cover, 1 page editorial, 1 page ToC, 2 pages of SRD, 3 pages of advertisement, leaving us with 19 pages of content, so let’s take a look!

This time around, we take a look at wererats, now reimagined as part of the Bite Me!-series. They get +2 Dex and Con, -2 Wis, the two bloods racial feature (making you count as a parent race as well as a shapeshifter for purposes of being affected by effects), low-light vision, +2 to Perception and Survival. Beast Form works is presented in a rather precise wording construct that takes temporary hit points, equipment and the like into account and the odd formatting discrepancies gone – no complaints. In beats or hybrid form, DR 2/silver is gained and increases by +2 every odd level gained to a maximum of DR 10/silver. The wererat gains wolfsbane vulnerability and silver vulnerability. Wererats also gain Weapon Finesse as a bonus feat. That may just be me, but I am not too keen on wolfsbane as a universal vulnerability for lycanthrope-races; to me, it makes less sense for wererats to be affected by it, but that just as an aside. Regarding beast form and advancement, wererats may actually be suitable for the less powerful groups than some of the other Bite Me-iterations, since their diseased bite may be strong, but has less direct combat application.

Wererats get their own age, height and weight table, which is nice. The race does receive an assortment of no less than 11 alternate racial traits that include darkvision, Dodge as a bonus feat, emphasis on the social nature of rats, permanent rat teeth (cool!) or the option to call forth rodents to talk to and command. No complaints here and the section does combine these in handy, preconfigured set-ups for your perusal. The pdf provides favored class options for the APG, classes, UC-classes and the magus. They generally are cool, though the barbarian-entry lacks the note that the movement speed increase does not have mechanical repercussions unless taken in increments of 5 to account for the 5-ft-focus of tactical movement.

The pdf features a total of 3 different archetypes, the first of which would be the Bully Slayer ranger, who specializes in bringing down Large or larger humanoids and replaces wild empathy for +1/2 class level to Intimidate checks, while also losing the size penalty. 1/day bane versus bullies and longer duration of the ability complement this one. The second archetype is the lightning rager barbarian, who modifies rage to instead grant +2 Str and Con, +4 Dex; 3rd level provides a scaling dodge bonus to AC and an insight bonus to Ref-saves. 7th level nets evasion, 13th improved evasion. Huge problem: The better rages do not follow the theme set by the base rage ability, making the archetype feel half-finished. Not something a GM can’t fix, but still. The third archetype would be the Sewer druid, who replaces woodland stride with skill bonuses, movement through difficult terrain in sewers instead of trackless step and iron stomach as well as disease immunity. Wild shape is gained later, at 6th level and at -2 druid levels…oh, and they may assume otyugh and ooze-forms.

The pdf offers a total of 12 racial feats for wererats. These feats include 1/day rerolls due to danger sense, skilled disappearing in crowds, improving the summon tricks to include swarms, bleed to bites, a swim speed and some unique tricks via a 3-feat Style-chain: For example, when targeted by a full attack and missed by all attacks, you can retaliate with a combat maneuver to render the foe fatigued. The problem is that this feat does not specify an activation action – I assume it just happens when the foe misses you, but I’m not sure. Gaining the benefits of being Small is possible and the pdf also has a means to use next a 5-foot-step to avoid attacks, which is cool. Somewhat odd – the feat makes clear that the character can’t use a 5-foot step in the round following its use, making sure that you basically borrow next round’s 5-foot-step, but what about regular movement? I *assume* that’s still possible or does the evasive action count as next round’s 5-foot step and thus eliminates other movement? This pdf does not contain Bite Me!’s Hybrid and Primal Shape feats, so if you’re looking for these, you’ll need supplemental material.

The pdf also covers items – a total of 4 mundane items is included, featuring rat scent, rat-calling pipes, slick that helps staying out of the grasp of foes and air sweetener to avoid diseases. The pdf also features a new special weapon quality, which, at +1, increases hide and miss chances AND maintains invisibility for the attacker…which is insane and totally underpriced, particularly since it can be applied to ranged weapons. A helm that facilitates rodent communication and nets a diseased bite attack (properly codified as primary) and a rat saddle are okay, as are lenses that can store light they then may emit as fiery rays. The one item that *really* is cool among the magical ones would be oil that slims targets passing through squares treated with it, allowing thieves and scoundrels to escape through impossibly thin cracks – very cool.

The pdf features a rodent subdomain that allows the user to gain increased speed and a bonus to Stealth 3+Wis-mod times per day. The pdf also features a total of 5 new spells: Close Quarters is intriguing: It allows you and another Medium or smaller ally to occupy the same square and count as flanking foes if you attack the same target, which is incredibly useful for sneak attack. That being said, the spell assumes that you move into an adjacent square when it ends – but what if there is no room? Also, at level 1 bard, inqui and ranger, this spell is pretty strong, though the restriction to the “tricky” classes keeps is still in the “potentially VERY problematic” rather than the “broken” field. Using crowd stride to teleport through crowds is pretty cool and gnaw anything lets you ignore significant amounts of hardness with a selected natural weapon. Growing creatures in a swarm to twice their size is cool and there is a spell-option to increase the deadliness of diseases and poisons.

The pdf concludes with two sample characters with extensive backgrounds, motivations and schemes to incorporate them in your game – Suilin Hinatoi, a CR 11 monk/ninja and Merrick, a CR 9 sewer druid – both of the characters come with stats for humanoid and beast shape. As for the flavor of wererats as presented here, I don’t have significant complaints this time around – the social nature and predilection to guild structures, warrens and use of rodents as pets make sense and utilize the established material well.

Editing and formatting are very good on a formal level, though on a rules-level, there are some minor hiccups. Layout adheres to Misfit Studios’ two-column full-color standard and the pdf comes with a second, more printer-friendly version: Kudos!! The pdf comes fully bookmarked for your convenience and with an array of gorgeous full-color original pieces in Jacob Blackmon’s signature style. Particularly the rat-toothed humanoid shape getting ready to gnaw through a rope is awesome.

Robert H. Hudson Jr. and Mike Welham’s wererats rank among the better offerings in the wererat series. While there is some material to nitpicking the details, as a whole, there are some gems to be found in the squeezing and crowd-maneuvering component. Power-level-wise, the wererat is one of my favorites among the individual lycanthrope-race pdfs in the series. That being said, the hiccup in the barbarian is not too cool and the other archetypes didn’t really wow me either – I’ve frankly seen the concepts done in more complex and detailed ways. Usually, the items are a highlight in these and the same holds true here – there is some magic to be found…though the book oversteps balance-wise its boundaries here and there.

Staying invisible while attacking sans requiring a the improved version is very strong and in the hands of the right build, can be devastating. Similarly, two capable sneakers occupying the same space can make for a true shredder with the right build. This does not make the options broken, mind you – it just is a symptom of an impression of this pdf, namely that it could have used a slightly more delicate touch requiring some of the repercussions of its effects. These do not have to come up, mind you…but they may. In spite of the gems herein and me liking quite a bit of what I can see here, I hence have to rate this 3.5 stars, rounded down – a mixed bag slightly on the positive side.