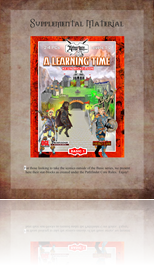 This module for BASIC-PFRPG is 26 pages long, 1 page front cover, 1 page editorial/ToC, 1 page information on pawns, 1 page advertisement and 1 page SRD, leaving us with 21 pages of content, so let’s check this out!

The first in AdventureaWeek.com‘s BASIC-line of adventures is intended for players of the BASIC-version of PFRPG and new players and comes with a surprising array of bonus materials: From the obligatory Herolab-files to a high-res .png of pawns of the player-pregens in full colour, high-res jpegs of all player characters, .png-tokens of the PC-faces and high-res jpegs of the monsters contained in this module to finally a player-friendly .png-map of the dungeon, the amount of supplementary help to run this via a VTT is commendable – two thumbs up.

Now this being an adventure-review, the following will contain SPOILERS. Potential players will want to jump to the Conclusion.

All right, still here? Set in the Exallizar Preparatory Academy, this module is geared towards a younger audience: Essentially, the basic premise is slightly reminiscent of a Harry Potter-style set up: The PCs are exemplar young adults, sent by their adventuring parents to become adventurers themselves, champions of the downtrodden and well-equipped versus the monstrous dangers that send regular commoners fleeing for their lives. Much like novels for young adults, this adventure can e considered a coming of age test of the capabilities they’ve acquired during their studies so far. When the legendary headmaster assigns the PCs to each other, they also get objectives that should drive home the necessity for the group to act as a unit and aid each other – each class-type gets a type of bonus-objective and then, the players are off for the proving ground of the deadly gauntlet.

Now many products geared towards a younger audience often presume children to be stupid – not so this module. In fact, the players have to act in concert, as evidenced by the very first encounter, a couple of goblins, though that’s not teh first creature: In a sarcophagus that can be opened with two pearls, there’s a troll with 6 HP – deadly if not put down fast and equipped with the power to rip a PC asunder. There also is the obligatory introduction-adventure ogre (2d6+9 damage, again, hopefully the players act smart!), two easy riddles to avoid combat with elementals and then there is a clever puzzle included in the deal – nice! While the players can always return and get healed and can retry as often as they like, their final grade will depend on their special instructions and whether they find the true and secret treasure room (which is thankfully omitted from the player-map). Thus, the adventure hopefully concludes with the PCs being top of their class!

The pdf also comes with 4 pregens, all set to go.

Editing and formatting are top-notch, I didn’t notice any significant glitches. Layout adheres to AaW’s two-column standard with a parchment-style background and the read-aloud-text looks like it’s printed on a scroll, while the gems, puzzles etc. come in their own colored boxes, which get neat lines at the top and bottom – personally, I prefer this box-layout to the one featured in other AaW-publications to date. The artwork in full colour are nice and of consistently a higher quality than the cover. The cartography is neat, as I’ve come to expect of AaW. The pdf also comes with a printer-friendly, background-less version.

Now, I don’t like the idea of an adventurer-school. In fact, I hate it. I hate Harry Potter and anything only slightly reminiscent of it with a fiery passion. Adventurer-schools make no sense in the context of any world I’d create. I really, really, really HATE the premise. Children don’t necessarily want to play young adults in similar circumstances – they want to play the badass hero. Thankfully, this module avoids the child-hero trap and has the characters be developed enough. That out of the way, I have to acknowledge that this module is well-crafted. The puzzles and riddles are nice, there is a neat selection of traps, combat and brains required to succeed and while in no way easy, this module should not prove to be an overwhelming challenge to PCs – if you do run this for children, and I did, make sure they understand the cooperative aspect of the game, that they can return to get healed and that their character may die nevertheless. If you do that, get ready to be surprised – the group of an 11-year old girl (fighter), a 10-year-old boy (cleric) , a 8-year old boy (rogue) and a 10-year-old girl (wizard) passed this module in my run without losing one of their number, retrying etc. and scored the bonus objective as well. Children are often smarter than we give them credit for – I actually expected one or more of them to die or throw a fit after being dropped by a foe, but no. They had an enjoyable time and the module worked fine. Much like 0one’s basic paths, this module is challenging, but doable. In the end, I consider this a well-made module, especially for a younger audience and thus will rate this a full 5 stars. If you’re older/looking for an adventure for more mature players, detract a star – this is still a good module, but loses some of its appeal.

BASIC-Series Iconics: A Learning Time is available from: