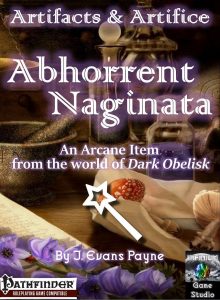 This pdf clocks in at 19 pages, 1 page front cover, 1 page editorial, 1 page ToC, 2 pages of SRD, leaving us with 14 pages of content. It should be noted that 5 of these pages are used to highlight the mission statements of Infinium Game Studios and the peculiarities of the massive adventure books and supplements the studio creates.

This pdf was moved up in my review-queue at the request of my patreons as a prioritized review.

All right, so the first thing you’ll note would be that the weapon itself, the abhorrent naginata, is depicted in a quadded version – that is, the weapon comes in basically 4 different iterations – ranging from +1 to +4. The lavishly-illustrated weapon (amazing full-color artwork there) sports rings of color, and each is tied to a specific race – RAW, the GM retains control of whether the PCs automatically get to know which band corresponds to which race – which is relevant due to the dynamic bane special weapon quality the naginata offers. As a formal complaint: This special weapon ability is bolded/not-bolded here, when special weapon qualities usually are italicized in PFRPG.

As a swift action, such weapons may change their bane type. The general special weapon quality is depicted in two iterations – as a +2 and as a +3 equivalent. From the abhorrent naginata, I could extrapolate that the lesser version is supposed to grant a +2 bonus to attack and +1d6 damage versus the target, whereas the greater version provides a bonus of +3 to atk and +2d6 damage – the lesser quality has been applied to the two less costly weapons, whereas the greater version has been applied to the two more pricey, high-level iterations of the weapon.

I’m saying “extrapolate” here, since dynamic bane as a generalized effect, in its explanation reads “dynamic bane weapons inflict an additional 2d6 points of damage if wielded […] they also receive an additional enhancement bonus of +2.” – for the greater version, however, that should be +3, which may generate some confusion there, as there is just one explanation in the box summing up the effect, even though the box lists the two variants. Cool: The pdf does note the weapon’s notoriety and potential quirks of ownership, which makes me expect more in that regard from the final book. A nice bit would be the table that allows for the random determination of preset enemies.

Another issue I have with the item would be that, in particularly the naginata’s higher iterations are underpriced – while the pdf notes that this is by design, it really, really annoys me. The naginata is priced at 36K in its third (+3 enhancement bonus), 54K in its 4th (+4 enhancement bonus) iteration – to this, we’d add the +3 equivalent of the very powerful greater dynamic bane, which would place the weapon at 72 K for the +6 equivalent 3rd version and 98K, respectively, for the fourth incarnation. I’m generally good with specific weapons being less costly than general ones, but in one case LITERALLY half the price of the crafted item…is brutal. Particularly considering how dynamic bane makes having a regular bane weapon generally a dumb and obsolete proposition. Personally, I’d have placed the lesser version with its flexible, untyped damage boost at +3. UNLESS, and that would be an easy way to limit this item and bring it in line with the pricing suggested, it actually had a cap of how many different modes it has – if e.g. the second iteration had 3, the 3rd 5, etc., I’d consider the pricing well-done depending on the modes it has…but since RAW, we have free and unlimited selection of types, I think it could use a higher price.

Really cool and developed would be the lore-aspect: In a quadded rumor table, a whole page is devoted to unearthing rumors and information about this weapon and its origins. This attention to detail and commitment to placing the weapon in a proper context extends to class-based hooks and general hooks that may be employed to integrate the item within the context of the game – a brief, fully-depicted quest, included a quadded rogue statblock of a wielder of the weapon has been included. Now this wielder is rather squishy at the higher levels, but considering the assassin-y angle and serious damage output the NPC can pull off, I can see the idea behind the NPC.

Editing and formatting are generally good on a formal level and, for the most part, on a rules-level as well. They need to extrapolate the lesser/greater distinction is a nasty glitch, though. Layout adheres to Infinium Game Studios’ two-column full-color standard with color-coded blocks, etc. The pdf comes with a backgroundless, second version that is more printer-friendly. The pdf comes fully bookmarked with nested bookmarks -kudos! The artwork of the weapon is really cool.

J. Evans Payne’s abhorrent naginata is a cool and promising magic item: In particularly the commitment to detail, lore and instant usability with a pre-made mini-quest should make this a feasible addition to the game. That being said, we do have a couple of hiccups in the mechanics that detract a bit from this item – both pricing and formatting could be tighter as far as I’m concerned – while I applaud the hyperlinks of e.g. the bane quality, seeing it bolded just rubs me the wrong way, big time – there is a reason we have formatting conventions in PFRPG and this is particularly baffling since the pdf gets it right most of the time.

That being said, I am a total prick here – I am, after all, complaining about a WIP-teaser for a massive compendium of magic weapons – and the teaser is FREE, ladies and gentlemen. FREE is hard to beat and while I disagree vehemently regarding the pricing, there is still time to play with the balance-screws there. The contextualization within the world that the item presentation format showcased here most certainly has serious potential and the lore aspect’s emphasis is similarly a significant strength that makes me interested to see the final book. In the end, taking the FREE-bonus into account, my final verdict for this FREE teaser will be 3.5 stars, rounded up – worth checking out and you have literally nothing to lose…and as a nice benefit, after this review, you’ll be well-equipped to deal with the one aspect where the rules may have you stumble for a second.

You can get this item FOR FREE here on OBS!

You can support the kickstarter to make a massive tome of items like this here! It’s fully funded and has met a couple of stretchgoals already!