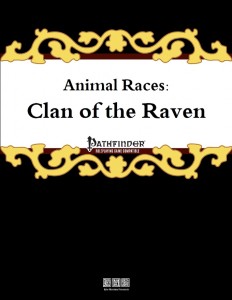 Ravens are among my favorite birds in real life – their intelligence and aesthetic appeal to me on a basic level. The Clan of the Raven’s members do share the traits associated with their real life brethren – known for an interest in education and the gathering of knowledge, including a pretty shady reputation, perhaps stemming from their uncommon assertion of death being just a station of the migratory lifestyle that is inherent in their culture anyways.

Now, as always, the racial heritage feats can be taken multiple times (with minimum level scaling upwards), providing a selection of additional racial abilities, unlocking more over the levels. The racial traits cover some overlap with the raptors: Primary claw attacks, increased bite damage, +20 fly speed and avid shapechanger, which suffers from the same problem of being available too soon for easy unassisted flight at low levels as in the raptor’s book. True shapechanger, the ability that ends all the limitations on shapechanging can be taken after covering the former. Falcons can choose that one after taking superior flighty, improved bite, claws and avid shapechanger.

Having seen trained falcons in action, I was quite surprised to see raptor’s dive (or an in-flight rush variant) not included here – especially since Raven Clan Heritage covers identical traits, but additionally also allows for the scolding ability, which nets you ear-piercing scream 1/day per 2 HD as a cha-based SP. Also, here’s a fun fact – I actually nurtured a semi-wild crow back to health when I was a child and if the their tongues are loosened as chicks (painless and no injury to the bird, btw.), they actually can learn to talk, so I was a bit surprised to see the voice mimicry trait, which conveys the ability of the infiltrator investigator archetype, not included among the options. Not a complaint, mind you, just an observation. Parrot Clan members can obviously select this one and also may choose avid shapechanger, claws, improved bite and flight, with true shapechanger being the only one unlocked later. I was a bit surprised to not seen an anti-object/sunder upgrade for parrots, to be honest. Songbirds may choose avid shapechanger, superior flight, voice mimicry and also, exclusively, tiny form, with true shapechanger as the only high-level choice.

This also points towards an issue – it is evident from the tiny form ability that songbirds are supposed to either always be small or that their bird forms are supposed to be small, when neither is required by the base racial traits. Interaction between the ability and medium songbirds is wonky. Beyond that, we also get 3 additional feats – Gifted Linguist, Swordtrained and Scavenger, providing variants of essentially what otherwise would be covered via racial traits as feats. Not a fan of either – swordtrained unlocks more than proficiencies and both Scavenger and Gifted Linguist feel pretty bland to me – flavorful in concept, but not too interesting.

As always in the series, we are introduced to a short section of the genealogy of the raven clans and, once again, a beautifully-written section on interaction with existing monsters and creatures anchors the clans in a fantasy world’s mythology. The deity provided herein would be Morringa, a participant of the wild hunt and a martially-inclined death goddess. The heraldry-traits provided once again can be considered interesting in that yes, the option to receive Gifted Linguist via them feels okay, though I do not understand why the racial traits have been made feats – in the long run, that’s only gonna cause confusion. Other than that, I have no issue with the heraldry traits and enjoy them.

Ravens and their ilk being known to have some knack for hoarding shiny things, the appendix of this pdf provides nice dressing tables of random trinkets – 3, to be precise: One for copper, silver and gold, with each entry being worth exactly one of the coins. Nice one!

Eric Morton’s raven clan uses the same framework as the installment on raptors, with some minor modifications – this is at once a blessing and a curse – since the raptor-installment was good, this one necessarily isn’t bad either. Internal consistency is also maintained, which is nice indeed. At the same time, though, the execution feels less distinct this time around – the subtypes are not that different when compared to the raptors and the clans could have, quite frankly, used more distinction from one another. The glitch with the songbird clan is annoying and I don’t get the baffling decision to make racial traits that already exist into feats, imho without a significant need to do so. While the fluff is great as always, the content herein does feel less varied than that provided in the raptor clan’s pdf and personally, kind of underwhelmed me in direct comparison. At the same time, I do like several minor tidbits, like Con-bonuses becoming Cha upon turning undead etc.

Still, I consider this one slightly less refined and, of course, the issues of low level unassisted flight remain. My final verdict will hence clock in at 3.5 stars, rounded up to 4 for the purpose of this platform.

You can get this installment of the series here on OBS!