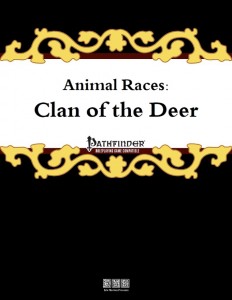 Much like prior installments to this series, we herein receive rules for PCs belonging to one of the tightly and concisely-presented animal clans, with deer therians this time being the focus of attention. The first choice this highly modular therian race offers would be the size – medium or small. Medium deer receive +2 Wis, -2 Int. Small deer receive +2 Wis, -2 Str. medium deer have a base speed of 30 ft, small ones only 20 ft. They are humanoids with the faun subtype – which is a bit odd, since the other installments of the series used the adlet subtype – why introduce another subtype? The members of clan deer also receive low-light vision, natural armor +1 (scales up to +2 at 10th level), scent, a gore attack at one step below what would be standard for the creature-size and selection from 4 different clans.

Much like the other clan-pdfs, we also receive excessive information on the genealogy of the clan, the folklore and receive a small write-up of the racial deity Cerunnos and once again, traits may be exchanged for bonus feats at the cost of penalties to saves or initiative.

Eric Morton’s Clan of the Deer is one of the coolest, most iconic animal race-pdfs so far – from the smart ideas to the excellent execution, the deer herein are stunning indeed – and somewhat frightening. This review is admittedly rather scarce on the fluff, but rest assured that this is intentional – this pdf manages to make deer-humanoids inspiring and I simply don’t want to spoil the means by which it does that. A truly unique rendition of the concept, even my own skepticism regarding the new subtype does not mar this pdf, being cosmetic at best. My final verdict will hence clock in at 5 stars + seal of approval.

You can get this awesome installment of the series here on OBS!