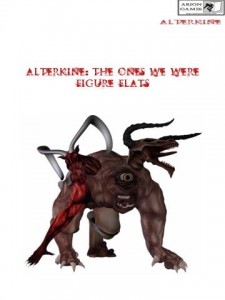 These figure flats come as two .ppt-files – one two-fold, one three-fold, with both of them sporting two pages you can print out. The figure flats are full-color and represent both the characters (including cultist leader Daniel Sutter) as well as the more horrific creatures featured in the module – and generally, I really like figure flats and the somewhat whacky creatures of the module, like the owlbear-style bear/frog-hybrid Brog.

That being said, I’m a bit of a snob; I can’t help it. I just can’t really get behind CGI-artwork like the one employed herein. There is nothing wrong with the material provided. There truly isn’t…however, the module’s weakest component was its artwork and my players, being sometimes immature, would not take kindly to some of these. I get that it’s as indie as indie goes here, so I expect no masterpieces and am lenient; but know what? I know that one green guy from some unholy abomination of such a book I reviewed back in the day…and while e.g. the lesser servitor walker looks awesome and aptly dangerous, the skinless creature and the aforementioned guy just look…giggle-fit-inducing. Similarly, while the Scaxtion tries hard to look intimidating (which should be easy, remembering the module’s description of it), looks more like a doofy, cyclopean Shrek to which cut off pieces of other minis have been glued – glued, not grafted, mind you – the transitions from its components look not particularly convincing. Take a look at the cover for further proof.

This still has a low price point, but if you’re running “The Ones We Were” with a more serious tone, I’d wholeheartedly recommend skipping this one, as it may prove detrimental to the atmosphere you’re trying to evoke. If you’re going for an atmosphere of fun B-Movie-schlock, however, then this will be worth the asking price for the giggles some of these will most definitely induce. If you’re getting this for said purpose, this could be considered to be a 3-star file; all others should rather rely on their narrative prowess and steer clear. My final verdict will fall between those two poles, at 2 stars. Nice for a self-ironic playing of the module, otherwise not recommended.

You can get these figure flats here on OBS!