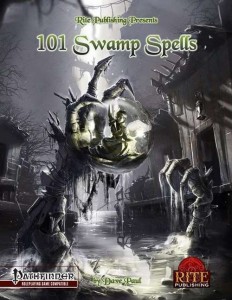 This installment of Rite Publishing’s classic 101-series clocks in at a massive 44 ages, 1 page front cover, 1 page editorial, 1 page SRD, 2 pages of advertisement, leaving us with 39 pages of content, so let’s take a look, shall we?

Unlike most spells, these are tied to the very environment – a rules-decision I like. After all, fiction brims with monsters and casters drawing strength from their domain (and yes, that happens to be one of the rules-concepts I pretty much love in D&D 5th edition), so seeing spells like this added makes for a good thing in my book. The pdf sports the swamp patron-spell list and spell-lists for ALL casting classes. So, essentially – these spells are potent, but when executed in a swamp (a term defined e.g. by virtue of ranger’s favored terrain et al., rendering the concept not alien to PFRPG’s rules and thus safe from my nitpickery), their potency increases beyond the otherwise existing combo-potential.

Okay, I can babble on for all eternity, but you’re interested in what I actually mean by that, aren’t you? well, let’s take a look at Acid and Poison, an 8th level spell that lets you target an object or point in space – said object thereafter becomes the origin of an emanation that transforms environmental liquids into acid that also poisons targets. Now if you’re familiar with making spells, this will render ALL alarm-bells a-ringin’: First, we have a complex area of effect, since it does provide the option for movement of the emanation origin. Well, the wording covers that. Secondly, the save-sequence versus acid/poison is less linear than one would expect. Once again, the pdf manages to handle that. Thirdly, the spell relies on environmental liquids – a term that is open to wide interpretation…until the concise, well-written definition gets rid of all ambiguity. Additional swamp effect? Ruin and affect magical and attended liquids on a successful caster-level check. And there I was looking forward to tearing the spell apart…

Kidding aside, this is pretty impressive, since it takes just about all variables of a spell and does something unique and interesting with them, elevating this spell far above the default “yet another damage-spells” crops. This spell also renders one sample of the aforementioned terrain-based enhancements these spells receive. Other spells utilize a slight escalation of the potency of their effects, while others are indeed, completely dependent on the terrain – flying through foggy air saturated with high degrees of ambient moisture only works for as far as there’s enough of that around – upon leaving such a swampy area, it’s literally all downhill for the airswim spell – love btw. the imagery the name alone evokes. This, however, is NOT where this pdf is content to stop – Kin of the Moor deserves, nay, needs to acknowledged for its interesting mechanics. A ritual in anything but name, it requires the recipients to provide hair as a fetish for a specific bonding to a vast area. Now the most intriguing part of this base spell would be that the text actually renders a highly complex mechanic for area of effect extension possible, allowing for the slow, but gradual extension of one’s domain. All creatures thus bound not only see a significant increase in potency (and yes, this increases proper wording that manages to capture numerical escalation beyond the bonds of usual level-caps) while in their chosen terrain, they also can be returned from the dead much easier.This is NOT where the spell’s appeal ends, though.

Let me confess something. I’m pretty much bored with many types of vanilla spellcasting. I’ve simply read too many default deal xyz/conjure forth bla-spells to be impressed by them anymore. I shrug, move on and hope for some glimmer of the new. Now, aforementioned spell serves as the basis for other spells, allowing you to teleport established kin to your side via another spell. This may sound pretty bland, but one look at the level and the entwined mechanic unveils this as a) actually pretty innovative and b) interesting also regarding the inherent logic of conflict-resolution in a magical world. I am dead serious when I’m saying that a couple of brief reflections made me come up with pretty interesting stalemate situations and adventure-seeds. And these days, not too many spells or themes evoke that from me.

Speaking of interesting synergy and terrain control – if you read a spell-title like chill fog, you pretty much expect a bland numerical damage, perhaps some obscuring mist/fog cloud-duplicate, but, at least I, did NOT expect the supercooled fog to quickly escalate its damage potential, potentially even duplicating full-blown the effects of encase in ice. More straight-forward, yes, but even if you refrain from utilizing this spell in its regular way, the base mechanics can make one glorious hazard – just think about it: The PCs open portal X, crash cooling tube of super-golem Y and suddenly, they have to flee the dungeon from the spreading, deadly cold – and taking too long to clear the doors and debris will see them slowly freeze, the escalation providing ample hints at the unpleasant fate to come. Yes, I may like this a bit – why? Because it COULD be bland. It could be boring. It could be reductive and simple. It’s nothing of these, instead electing to be evocative, uncommon and inspiring.

Now the terrain-control spells via control fog and e.g. control bog remain in no way behind these interesting options in the rather versatile and interesting benefits they put at the behest of their casters. Yes, not all spells reach this level of coolness (pardon the pun) – summoning nightmares 8and later, cauchemars) would be thematically fitting, but also pretty bland. However, what about the protection from swamps-spell? It sounds like everything I HATE about environmental spells – I mean, what good is a cool locale if the PCs can easily negate all effects? Well, this one instead makes hiding in swamps easier as well as providing bonuses versus poisons and diseases. Bonuses, not immunities, mind you. While a humble spell, it once again could have run afoul of quite a few bad design-choices and instead opted for a story-enabler: It doesn’t negate the threats of swamps, it tips the scales in the PC’s favor. And it’s better hiding component can be used by a good Dm to send an experienced group into swamps beyond their capacity. “Yeah, you only have to save the townsfolk from the swamp’s inbred cannibal – be sure to not run into the black dragon while crossing his terrain…”

Hey, remember those nifty shock lizards? Those cute buggers with the arcing electricity that got TPK-level nasty in groups? Well, what about spells that make you and your allies shockingly good team-members, providing essentially a teamwork-spell? Yeah, neat! There would also be a spell that is very powerful called Spirit Naga Soul. This allows the caster to cast cleric spells of 3rd level or lower at the cost of a reduction of 6th level spells…and very exotic material components. Now this spell could be considered very powerful and indeed, thankfully, the pdf acknowledges this. So what it does to balance this is the requirement for nasty and costly material components. Is this spell for every group? No. But instead of leaving the DM in the dark about its potency, it instead finds a way to balance this and thus puts control firmly in DM hands. What about a spell that lodges a stirge-proboscis in the target, draining blood and potentially attracting living stirges in swamps…Yeah, these spells take quite a lot work off the hands of a DM seeking to portray a concise environments – where usually, one would have to remember the like or create synergy-effects on the fly, these spells increase the immersion by helping the DM with generating the illusion of a concise terrain and spell/world-interaction. Yes, the spells may at times be variants of already existing options – but they are NOT boring. They are not bland. They are superior, more concise and creative iterations. They are, essentially, closer to my own ideal of how magic ought to be.

Editing and formatting are top-notch, I noticed no significant glitches. Layout adheres to a greenish variant of Rite Publishing’s two-column full-color standard. Artwork ranges from mind-boggling original to thematically-fitting stock-art and the pdf comes fully bookmarked with nested bookmarks for your convenience.

I did not expect to like this book one bit. It has ALL the strikes going against it. Yet another spell-book? Yawn. First time author? Urgh. Terrain-centric spell-book? Noes. I mean, think about 3.X terrain-books – cool hazards, cool effects, challenging ideas – and a bunch of classes and spells to negate all of that coolness. Not fun. Plus, I’ve read more than 4K spells for Pathfinder alone. On the plus-side, the book had Rite Publishing (with a nigh unparalleled track-record of decidedly non-boring, original and most of the time, superb pdfs) as a publisher. And I happen to be aware that author David Paul has academic teaching experience. Why is that good? Because academic writing (or software coding) isn’t that different from writing good crunch – you have a very specific set of rules-language, a syntax and semantics you have to work with, while at the same time being required to create new and innovative results without violating said parameters. And if the parameters hit their borders, expand them in a way that fits as seamlessly as possible within the frame of the presentation of the established rules-set.

I haven’t seen such a good spellbook from a novice-designer in ages. I am not engaging in hyperbole when I’m saying that I consider the spells herein innovative and inspiring. I am also not exaggerating when I’m saying that I was rather impressed by the willingness to tackle difficult concepts and putting them into a tight, fitting rules-language without compromising the vision behind these spells. This pdf was inspiring to read to an extent I very, very rarely encounter with spell-themed books. Better yet, this pdf’s crunch is not only inspiring, it displays the required mastery of craftsmanship to back up the artfully depicted effects of these astonishing spells.

To my complete surprise, this pdf’s pages blew too fast by while I was reading the pages and actually left me craving more such supplements for other terrain types. David, if you’re reading this, please keep writing. I really want to see where you can take your designs -we need more pdf like this that make spells interesting again. Final verdict? 5 stars + seal of approval.

You can get these damn cool spells here on OBS and here on d20pfsrd.com’s shop!