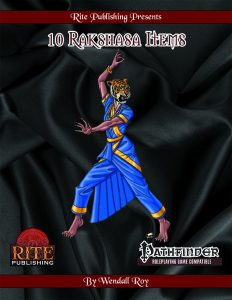 This little pdf clocks in at 7 pages, 1 page front cover, 1 page editorial, 1 page SRD, 1 page advertisement, leaving us with 3 pages of content, so what is this?

Well, these would be items for the, in my opinion, most awesome “In The Company of…”-installment released so far, the amazing book on playable rakshasa. I assume that you’re familiar with it in this review…and if you aren’t, be sure to check it out.

So, what do the items do? Blazing Spectacles net you burning gaze and if the wearer has a predation pool, hungerfire eyes as well – increased in duration, if you already have that predation. The circlet of crawling consumption outlines the prey of rarefied taste in silver, allowing for the tracking of the path of sin of a target through a population. Those with addictive feeding can enjoy synergy here. Leaping Hare is a powerful club, but alas, sports several glitches – the weapon’s not italicized and the write up sports several confusing notes, probably remnants from pricing it: “4.5K, 4K,” etc. – those should have been caught.

Links of Binding impose penalties on saves vs. abjurations on those hit and decreases, if present the cost of defense of the hunting grounds. The perfume of courtly nibbling can be nice for more discreet yaksha indulging in rarefied taste – instead of killing the prey, it receives 3 days to shake off the negative level and avoid death…which can also make tracking the predator harder. The Meat Hood of the Frugal Gourmet can indefinitely preserve humanoid corpses and support weight when pressed to a surface. Less utility-based would be the Rajaadharma staff, but in an AMAZING surprise, it not only enhances compulsions versus specific targets and sports some spells, it is also particularly potent in the hands of a vizier – yep, this is actually an item that is more potent in the hands of the amazing Akashic Mysteries-class. Nice!

Ravenous tongue of Meghanada is a powerful urumi (not properly italicized) is a raksaha-only, very hard to use whip-sword that bestows negative levels on those hit, heals its wielder and can even provide nourishment for the wielder…which, generally, is damn cool. Oh, and it can’t be kitten’d effectively. Nice job! The expensive smoking jacket of deceptive light allows for move action maintenance of illusions as well, as, predation pool provided, enforced rerolls of saves…and some spells in a can.

The pdf also includes an item-class, the broken spirit bag, which comes in 5 iterations – they are basically gris-gris bags that can be used by yaksha with rarefied taste that kill humanoids to not gain sustenance, instead channeling the life-force in the bag, storing predation points, which can then be used to power predation abilities. Cool: They don’t necessarily occupy an item slot, but if they do, they’re less expensive. See, and that’s how you make a mechanically boring item amazing via great fluff and cool tweaks…kudos!

Editing and formatting are generally good on both a formal and rules-level, though the aforementioned glitches could have been avoided. Layout adheres to Rite Publishing’s two-column full-color standard and the artwork featured is nice. The pdf has no bookmarks, but at this length doesn’t need them.

Wendall Roy delivers here – the items are universally reasonably priced for what they offer and flavor-wise, are FRICKIN’ AMAZING. That being said, unlike most installments in the series, we don’t get a quasi-artifact legacy weapon this time around, which is a bit of a pity. The series’ items also tended to have various iterations in potency that you won’t find here – so this is, as far as the series is concerned, more conservative than other installments. At the same time, the content oozes flair and panache and made me grin from ear to ear. While the glitches make it impossible for me to bestow my highest accolades, this still is a great purchase for a more than fair price, which is why my final verdict will clock in at 4.5 stars, rounded up to 5 for the purpose of this platform.

You can get this pdf here on OBS for a single buck!

You can get the bundle with the amazing ItC-installment here!