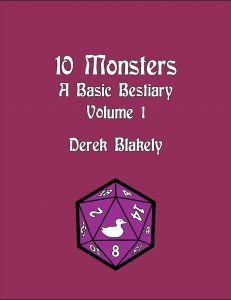 This little bestiary clocks in at 13 pages, 1 page front cover, 1 page editorial/monsters by type/CR, 1 page SRD, leaving us with 10 pages of content, so let’s take a look!

We begin this pdf with the blessed ring at CR 6 – an immobile ring of Large mushrooms that may not move…but it *can* spray devastating bursts of acid at foes. After entering the ring, it generates a dome to rest in, so yeah, sniping into camp is impeded as well. Sounds like your average adventuring nightmare? Nope, for there is a twist: These plants are actually good, can detect alignments and only assault evil creatures – they represent basically a powerful safe zone to rest and recuperate for the good guys. Creepy? Yup. But also damn cool. Oh…and they don’t make much difference between things – if one being inside is evil, the digestion routine begins…ouch.

The cadavalier at CR 9 is a pun worthy of yours truly; it is also an undead, quasi-centauric entity with retributive bone spurs, powerful leaping capabilities and serious armor training. While I noticed a minor typo in the flavor text, I was pleasantly surprised to see notes on advanced creatures and creating these undead. At CR 7, cavern giants would actually be pretty kind beings – uncommon for the udnerdark. Beyond their cauliflower ears, their rules also enhance their theme – they absolutely love wrestling, allowing them to inflict nonlethal damage, Dex and Str-damage…you get the idea. On a nitpicky side – their thrown stalactites should probably inflict piercing damage, not untyped damage.

Cavernivores are more straight-forward – at CR 12, they are huge reptiles with bioluminous tendrils. Think of them as basically the reptile equivalent of angler fish. Torturer Devils would be, now that kytons no longer are straight devils, the stand-in – immune to the effects of social skills, they are a brutally efficient build with extended threat ranges and multipliers and a nasty pain-debuff – that should probably be codified as a [pain]-effect.

At CR 25, the gloom is a living nightmare – bald humanoids with no face, exaggerated smiles full of black teeth in funeral clothing, they clock in at a mighty CR 25. They receive exceedingly powerful blades, are absolutely silent and receive both sneak attack and opportunist – basically, they are high-end, nigh-unstoppable supernatural assassins. Deadly. CR 10 brings us Old Man Winter, the oversized axe-wielding corrupted fey that draws life from those slain, who actually, in spite of the type, makes for a deadly adversary. Oh, of course, he has ice-themed SPs as well as the option to conjure forth icy winds for soft crowd control.

The CR 9 Tamazulim is a gigantic, warty toad that emits a truly despicable stench – obviously, it receives a tongue grab…but it may also breathe lightning. That being said, from the flavor-text, I expected the stench quality here. Oh well. The CR 7 Phantom Troll is a damn cool idea: You see, these guys are not only great hunters and beings that heal by inflicting damage and cause Str-damage – they’re also naturally invisible. I really enjoy this critter, but one ability contains a cut-copy-past remnant referencing the invisible stalker. They still rank as one of the most challenging CR 7 critters you can throw at players.

The final critter herein would be once again one for the higher CRs – 23, to be precise. The Typhoeon has a humanoid torso and head, but the lower body of a colossal snake, with serpent-shaped arms that sport serpent heads where the hands should be. Oh, and wings. It can fly. In a minor discrepancy of fluff and statblock, the fluff notes the creature to have serpent heads, while the respective abilities reference dragon-heads…which btw. can both basically generate flame-thrower style cones each round.

Editing and formatting are okay; I noticed a couple of unnecessary hiccups. Layout adheres to Purple Duck Games’ two-column b/w-standard and the pdf actually comes bookmarked, in spite of its brevity. The pdf has no artworks.

Which brings me to a central aspect – personally, I prefer substance over style and this pdf does feature some cool critters with interesting abilities and evocative concepts – I can envision quite a few of them better than similar creatures, so as far as I’m concerned, for the low and fair price, this does a nice job. That being said, not all of Derek Blakely’s critters are amazing and the editing/formatting hiccups make themselves felt in such a small file. At the same time, I will actually use a few of the critters herein, which, considering the amount of critters at my disposal, is a sign of neat design. I should probably round down from my final verdict of 3.5 stars, all things considered, but considering the fair price-point and the gems that are herein, my final verdict will instead round up.

You can get this inexpensive little bestiary here on OBS!