Whispers of the Dark Mother #5: Call to War

Whispers of the Dark Mother #5: Call to War 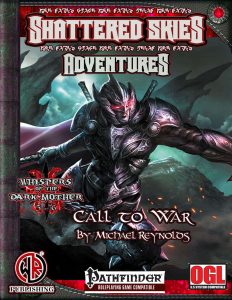 The fifth installment of the „Whispers of the Dark Mother“-series clocks in at 23 pages, 1 page front cover, 1 page editorial/ToC, 2 pages of SRD, 1 page back cover, leaving us with18 pages of content, so let’s take a look!

As always in the series, we do receive a deity-write-up – this time around, this would be Rullux, god of tyrants, treachery, violence and war – 4 domains, 3 subdomains. As always, the deity does come with extended notes regarding the role of priests, shrines, etc. – all in all, a decent write-up. The pdf sports 3 full-color maps; 2 of these, alas, are so small that printing them out is problematic: They only take up part of the map, which is puzzling. Considering that they’re pretty player-friendly. The pdf also sports a full-page map of the final environment – which is just as full-color and nice as the others, but unfortunately sports numbers, disqualifying it as a player-map. Frustrating, to say the least.

The pdf sports a lot of statblocks – alas, much like quite a few of the previous installments in the series, there are quite a few statblocks that sport errors. So, if you find that kind of thing troubling, be aware of this component.

Only GMs around? Great! So, if you thought that PCs would want to quickly track down the mastermind between the cult of Shub-Niggurath’s rise…you’d be wrong. The series considers it to be more prudent to restock in Brighton, which you *can* sell on players, but frankly, I think the module could have used some guidance there. The whole first part of the module is a series of combats throughout the town of Brighton – there is a map of a temple, a map of streets, and encounters to be fought against orcs and ogres. Encounters that range from “boring filler” to “mega-lethal” – there is an encounter with 20 ashen orcs, at CR 1/3. And one against 8 skeletons and 16 zombies. Or, as my players would call them: Boring filler. Or fireball.

Then, suddenly, there’s a mutated ogre, whose critical hits, even with the statblock errors, are potent enough to insta-kill melee characters with a single critical hit. Sure, there is some treasure to be gained for saving folks, but yeah – I also was puzzled what constitutes “reusing” the mayor’s cloak to save him…and how the hell the PCs can see him tumble over the cliff and be stuck in a branch. Do the PCs have a side-view of the cliffside? If so, what’s the Climb DC etc. to reach it/gain it? This whole section was really weak and was very inconsistent with the tone of the adventure-series so far; up until now, we focused on dark fantasy, and now, suddenly, we have a war-scenario? Kinda felt like thematic whiplash. The one good thing I can say about part I would be, that some random terrain hazards/complications to simulate the chaos of the raid, are nice. That being said, have seen that done better as well.

Part II of the module, then, would be a journey onto Bright Mountain – oddly, the parts of the way up the mountain note letters, which hint, somewhat, at a missing map. Traveling up the mountain, the PCs…bingo, encounter monsters – Tendriculous. Forest Drakes. A camouflages pit trap. Sounds boring? It…unfortunately kinda is. The ogre camp that represents the “finale” of the module. It’s a camp (curiously called “town” in the text) with 2 ogre sentries. There are gore-heaps that animate (“The undigested”) and a survivor, doomed, unless the PCs intervene…the one instance where a bit of the series’ themes can be found. In the center of the camp, an ogre cleric is conducting a ritual to summon a demon, with the help of the other ogres and orcs. How many? No idea. And since the ritual ends when the PCs get close, I have no idea regarding the opposition’s numbers. The encounter’s set-up (2 CR 6 foes) makes this look like they’re supposed to be all that the PCs fight.

And that’s it. There’s a path into Bright Mountain. Improperly formatted loot. And a sour taste in my mouth.

Editing and formatting are still okay – not even close to good, but you can try to run this as written. Layout adheres to a 2-column full-color standard with solid full-color artworks, though I’ve seen some of them before. Cartography is similarly in full-color and I’ve already commented on their issues. The pdf comes fully bookmarked. As always, it is pretty annoying to note that selecting text or copying it, is impossible – that aspect has been disabled.

This module was penned by Michael Reynolds, Jarrett Sigler, Robert Gresham and Charlie Brooks. It is a module that exists in this series…but imho, it’s not a part of the series.

This whole module is a prime example of filler.

This module does absolutely nothing to propel the meta-plot forward; it is based on a curiously non-sensible place within the series.

For the most part, crucial information is utterly opaque. Orcs and ogres that vanish suddenly (mentioned in the text, then gone, no stats), weird descriptions; it is evident that this module wants to be the series’ “Red Hand of Doom” and “Hook Mountain Massacre” – alas, it fails at coming even remotely close to either. It seeks to evoke them, without getting what made these classics work.

The encounter-balance is all over the place and bogs the PCs down in tedious combat that should be abbreviated by fireballing the heck out of everything.

Most puzzling, though: Beyond the technical and design-shortcomings, this module never manages to really evoke any sort of proper atmosphere, it lacks the quasi-occult, horrific threat that suffused even the subpar second installment.

The talk with the prisoner in the end gets closest to something intriguing, but boils down to either tough choice and needless ickyness that isn’t really explained, set up or deserved.

Instead of a compelling story or atmosphere (the big strong points of #1 and #4), unique environments or anything, really, we have a succession of utterly bland, generic combats.

Orcs, ogres and some random encounters, held together by a flimsy premise and next to no story, rhyme or reason. I can see folks salvaging #2 for the flavor and ideas in the module, flawed though it may be. The same can’t be said about this module. I can literally picture no reason to get this module. I tried really hard, I really did, but I can’t think of any even remotely good component about this. Not one.

Even if you play the adventure-series in sequence, I strongly suggest replacing this module with one that actually sports the themes of the series. Adding a “I die for Shub-Niggurath 11eleven!!!”-throwaway-line to generic orcs dying does not make them interesting.

In short: This module is generic filler and the low point of the series. Skip it. Go from #4 to #6. Add some other module. Anything. My final verdict will clock in at 1 star.