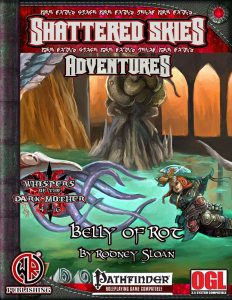 The fourth installment of the „Whispers of the Dark Mother“-series clocks in at 26 pages, 1 page front cover, 1 page editorial/ToC, 2 pages of SRD, 1 page back cover, leaving us with 21 pages of content, so let’s take a look!

As before in the series, we do get a detailed write-up on one of the deities of Celmae – this time around, the deity in question would be “The Traveler” – a good deity of travel, void, etc. – 4 domains, 4 sub-domains are included. We get notes on priest’s role, shrines, etc. – while pretty close in themes to Desna etc., it is a solid write-up.

Now what’s kinda awesome: The complex map provided for the final encounter of this module actually is printer-friendly, takes up a whole page, and is player-friendly – big kudos there. I really wished the AMAZING side-view map of the complex, which is pretty vertical, would have been included in a similar manner. I really liked it, it’s nice – but my players will never get to see it. Still, a step up from the series’ standards.

All righty, this being an adventure-review, the following contains SPOILERS. Potential players should jump to the final conclusion.

All righty, only GMs around? So, the PCs come to Brynndell, the capital of the nation, following the trail to Corvun Baerg, who has a hand in the machinations of Shub-Niggurath’s cult. To be more precise, the trail leads to an ossuary/museum, the Os Domus, where a properly lined up chase promptly erupts. Goons intervene as well, and their statblock shows that…well, there are glitches and the annoying formatting deviations from statblock formatting standards are back. It’s puzzling to me to see errors in a fighter 1/rogue 1 statblock. *sigh* the glitches could be worse, but still. Sooner or later, the PCs will properly come in contact with the Grey Maidens and ultimately deal with “Corvun Baerg” – a double, as it turns out. PCs that did their homework will know that he recently purchased climbing equipment.

The trail leads into the wilderness, passed farmsteads where cultists anointed their journey in blood, to the grotto known as the Eternal Womb; a horse pyre, a ditched campsite, a hole in the ground – getting down into the hole will show a quasi-sub-terraneous grove, where dryads can be found – ostensibly corrupted by Shub-Niggurath’s influence, they strangely still have their CG alignment… Cool, on the other side: As seen on the cover, there is a giant, fey-touched snallygaster; there are sickly moss strands and tunnels – there is serious atmosphere here, including a doom-prophesying pillar that hints at the shape of things to come for the Shattered Skies setting. Crossing polluted water across a stagnant lake, the PCs will have to once again deal with a graven guardian as the PCs make their way towards the subterranean temple of the Dark Mother – where the aforementioned, cool battle-map-style map comes into play: Cultists chant around the Maw, a bottomless hole containing an avatar of the elder god; above which another cultist is held by ropes; the forlarren concubines of Corvun lack stats…but the satyr slayer boss does gain stats. While we get 3 cultist stat-blocks, the module isn’t very clear regarding the nature of which to use when. Unfortunately for the PCs, Corvun has already ventured forth towards the Bright Mountains, his apotheosis complete – so, at least for now, stopping that man will be the next stop on the path of the PCs trying to foil the machinations of the cult.

Editing and formatting are okay – while there are annoying discrepancies and deviations from the standards, the statblocks are generally in a usable state. Layout adheres to a 2-column full-color standard that is rather nice. The artworks herein are a blend of neat original ones and a few stock pieces. The pdf comes fully bookmarked, which is nice. The module sports really nice cartography – one map comes in a nice, full-page player-friendly version, but I wished the same could be said of the cool overview map. As always, it is rather annoying that selecting text/cut-copying text, has been disabled.

Rodney Sloan, Robert Gresham and Simon Peter Muñoz deliver, content-wise, my favorite installment in the series so far: We have diverse challenges. Flavorful, atmospheric write-ups…and more importantly, the vertical mini-dungeon and the cool final encounter sport a lot of neat environmental hazards – this has, by far, the coolest environments in the series so far; unique, flavorful backdrops.

There are downsides to the module, though: Beyond the weak editing/formatting components, the adversaries, after the last, rather challenging two modules…are a cakewalk. The final boss is a horrid wimp. At level 4, my players would one-on-one the fellow, in spite of the environmental hazards. If the characters don’t all fail their saves against the save-or-suck low-level spells. Additionally, some of the opposition in the encounters could be defined more concisely. If the editing was tighter, then this would most assuredly be a module I could recommend more warmly. As provided, this is one of the better installments in the series, though, and may be worth getting for the low price-point for the environments and ideas.