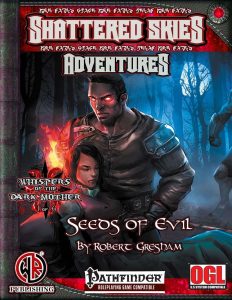 The first installment of the Whispers of the Dark Mother-adventure series clocks in at 31 pages, 1 page front cover, 1 page editorial, 2 pages of SRD, 1 page back cover, leaving us with 26 pages of content, so let’s take a look!

All righty, only GMs around?

We begin this first installment of the saga near the town of Brighton, where farms producing fruit produce a quilt of colors, steeping the town – the prose does a nice job setting the stage and the adventure hook is pretty evident from the get-go, as the first sequence of read-aloud text points the PCs towards Lady Celeste Canterville’s mansion, where an offer of free apples seeks to lure potentially interested parties towards the place. PCs more inclined to first complete some legwork will have a chance to research a variety of rumors, some of which are automatically found in certain taverns, rewarding PCs for covering their bases. A detailed selection of sample sentences to help GMs with read-aloud sections on various topics will be particularly appreciated by less experienced GMs that have a harder time come up with ad-hoc responses.

At the lady’s mansion, the PCs are greeted by her servant and they are approached by a bard, one Kara (with full stats, which, alas, sport some minor glitches, something that can be observed for all statblocks in the book), who seeks to join them on their trip at the behest of Lady Celeste – you see, the lady wants the PCs to procure gate willow seeds and some other herbal ingredients. These magical plants can enhance summoning spells and once again, a lot of detailed responses are provided for the social interaction. The harvesting of these plant components, is, however, fraught with danger – both the willows and the whipweed seeds required can be hazardous to harvest, which is why the PCs are contacted in the first place. After this talk, a woman called Shala contacts the PCs as well – her son Faven has gone missing and she beseeches the party to look for him, handing them a wood-carving to gain the lad’s trust.

Thus, the PCs venture into the woods – which are represented by a mini-wilderness exploration, noting landmarks, flora and fauna to be found within the area. A random encounter table can add further complications to the exploration, if required. Beyond these random encounters, there also is a sequence of planned encounters, which include fire-breathing vor-gremlins. The exploration takes the PCs past sharp seeds, a cave-fisher’s lair and puts them into direct confrontation with xtabay plants as well as the previously mentioned whipweeds, establishing a leitmotif of a magical and dangerous flora – subtle, but a concise leitmotif nonetheless. As the PCs approach Bright Mountain, they will sooner or later find the gate willow grove, and these plants have managed to call forth an akata guardian that makes for a potent boss for this sequence of the module. At one point during their trip, the PCs will also have a chance to test their mettle against an ogre, but ultimately, they should arrive back at Lady Celeste’s mansion sooner or later, meeting the lady in her library…but not all seems to be going well. The doors of the mansion are ajar, Emilio lies slain and cultists led by a half-orc are threatening the lady.

Ultimately, the cultists seem to have the goal of acquiring a rare tome, namely the Lamentations of the Fungus Men…and here, the module changes its so far calm and serene pace in favor of a nice little chase – though ultimately, the one-eyed half-orc will manage to abscond with the book, leaving a grievously wounded and either poisoned or diseased lady Canterville granting the PCs a precious few hints, before expiring, blood foaming from her mouth….and the denouement, like magical question etc., will not yield more…but the PCs will probably be enticed enough to follow up on this mystery.

Editing and formatting, particularly the latter, are the weak points of this module: Lower cap skills, italicization hiccups etc. can be found, as well as some plural/inflection hiccups that sharply contrast with the otherwise rather evocative prose. Layout adheres to a really aesthetically-pleasing two-column full-color standard and the pdf features some nice full-color artworks – impressive for the low price-point! You cannot highlight text in the pdf, which is somewhat jarring, but less annoying in an adventure than in a crunch book that you’re likely to extract data from. Cartography is full color and generally solid: A player-friendly version of the region is included. However, the maps for both the wilderness exploration and the combat at the end are pretty small – getting a one-page version to print them out, preferably sans map-key, would have been nice.

Robert Gresham, with additional writing by Ewan Cummins and Jarret Sigler, delivers a nice beginning to the “Whispers of the Dark Mother”-storyline here. The module provides a sufficient amount of information regarding the proceedings and manages to establish a nice atmosphere of a fantastic wilderness exploration. The thematic leitmotif is subdued, yet very much present, helping the overall atmosphere of the module. The prose, when it doesn’t stumble over a minor hiccup, is actually really good – It is not too verbose, but detailed and well-crafted enough to manage to evoke a unique atmosphere. So yes, this was actually a solid read. That being said, the module, quite deliberately, begins with a slow and steady, almost picturesque build-up that is sharply contrasted at the end of the module, making for a nice setting of the stage for the darker things to come. This is not a groundbreaking module, but for the fair price point, it delivers. Seeds of Evil achieves its goal of setting up the story and establishing the tone of the things to come. If the formal components like proofing and editing had been better, this would have received a warmer recommendation from me, but as a reviewer, I cannot ignore these flaws. It runs well enough, though, which is why my final verdict will clock in at 3.5 stars, rounded up by a margin for the purpose of this platform.