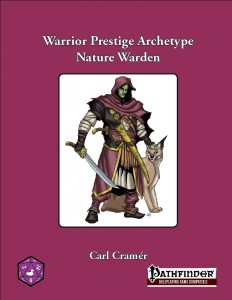 This time around, we take a look at the Nature Warden, who gets d10, full BAB-progression, good fort- and ref-saves, 6+Int skills per level, proficiency with simple and martial weapons and light and medium armor as well as shields. They do have a prohibition against wearing metal armor and non-wooden shields. At 4th level, they receive Wis-based prepared divine spellcasting drawn from the druid or ranger lists. On the nitpicky side, I would have enjoyed a note here that specifies whether a nature warden uses the higher or lower spell-level if a spell is e.g. spell level druid 2/ranger 1 – I’m aware of the convention using the lower, but since there are exceptions, I still would have appreciated a note here.

Nature Wardens, as based on the ranger-chassis, obviously receive full favored enemy progression. 3rd level and every 5 levels thereafter receives favored terrain choices. The nature warden receives an animal companion that shares these two from the get-go and at the full potency of the druid, as opposed to the ranger’s hunter’ bond class feature. At 3rd level, the favored terrain bonus is added to AC as an insight bonus.

Natural empathy is also among the class features the nature warden begins play with. 2nd level nature wardens receive at will speak with animals while in favored terrain, 1/day outside it – here, the rules could have been slightly more elegant, seeing hw favored terrain is only gained at 3rd level, rendering the ability limited to 1/day at 2nd level – but this is a pretty much irrelevant design aesthetic complaint. Speak with Plants is gained at 15th level with a similar mechanic based on terrain. On the plus-side, wild stride, a non-plant-based woodland stride in favored terrain provides a nice option and at 7th level, aptly put into the class’s progression.

The animal companion treats attacks as silver at 6th level, a benefit that also extends to all creatures summoned via summon nature’s ally-spells. The cold-iron-based variant, Ironpaw, is relegated to 18th level, which is pretty far down the line. Survivalist, which allows for the examination of tools to treat them as masterwork, comes at 9th level alongside evasion. Almost classically by now, we get quarry at 11th level and camouflage at 12th. In an interesting decision, both guarded lands and woodforging come at the same level, 14th to be precise.

The class comes with favored class options for the core-races, most of which focus on the animal companion. The pdf also sports sample builds at 1st, 5th, 10th and 15th level – here, a cool layout decision has been implemented -arrows conveniently show when a new statblock begins – relevant, since the sample stats come with animal companions. It should also be mentioned that the pdf’s sample NPC comes with excessive prose, which does feature some nice turns of phrases that had me chuckle – “pure-bred half-orc”? Yeah, kind of funny!

Carl Cramér’s nature warden can be pretty much considered to be a variant ranger with a focus on the animal as opposed to combat style – more of an animal handler, essentially. Now I consider the base PrC on which this is based pretty much rubbish – the abilities are all over the place and are gained at points where their usefulness is limited and/or gone. The good news, then, would be that this WPA does some things right in the dispersal of abilities over the levels. Now full BAB + full companion means that, at 1st level, nature wardens with their companions will be pretty damn strong, but this levels out at later stages in game – when the class, at least in my opinion, could have used one thing more than anything other – new abilities.

Yes, I am aware that this is not the design-goal of this series, but hear me out: The nature warden as a PrC lacks a distinct identity beyond the terrain-options. The closest it arguably gets to it would be with the DR/silver and cold iron tricks. Now, much like the PrC, the PA oddly seems to value the latter as much more valuable, when both are considered equal for purposes of objective value in monster design. The high-level abilities of the nature warden feel like they come a bit late to the party, when earlier gains would have put player agenda higher on the table. If this PA is an example of one thing, then that would be that this PrC is in desperate need of more unique tricks. Conversely, first level feels a bit cluttered, with lowest levels being where the nature warden shines most – not to the point of being broken, mind you, but still – the nagging feeling never left me that this PA could have easily reached apex-levels, had it dared to add more unique options for the class presented – move the mid/high-level utility tricks down, slightly stretch the numerical escalation and sprinkle in more signature abilities et voilà – excellence.

As crafted, the PA remains solid, true, but also, at least to me, somewhat underwhelming. Still, as a reviewer, I have to take the design-intent into account – which remains the only reason I will round up from my final verdict of 3.5 stars.

You can get this prestige archetype here on OBS and here on d20pfsrd.com’s shop!