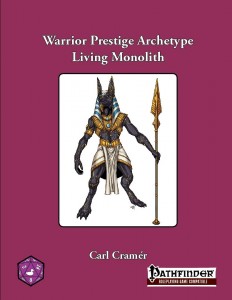 The Living Monolith receives d12, full BAB-progression, 2+Int skills per level and good fort- and will-saves as well as proficiency with light armor, simple and martial weapons and shields, but not tower shields.

Okay, so what do these guys get? Well, for once, we receive DR 1/ and a 10% chance to ignore critical hits and sneak attacks at first level, scaling up by +1/+10% at 4th level and every 4 levels thereafter. Which is solid, seeing how in my experience DR tends to be an overvalued commodity. The living monolith also has a finely-carved scarab embedded in his forehead – said scarab not only provides a passive bonus to a bunch of saves, but also can be utilized to enlarge person the monolith. This carries a kind of issue – for once the ability is supernatural, not spell-like – which I do not object to – playtest did show that the bad armor-situation does mitigate somewhat the range received. That being said, I do have an issue with the lack of a CL – seeing how enlarge person’s duration is dependent on that and with SUs providing no default, we have a rules-gap here that ought to be closed – unlimited duration size-increase would be a rather hard pill to swallow, especially considering the lack of options to dispel it. At higher levels, enlarge person is replaced by righteous might, but alas, the problem persists.

Automatic stabilization at 2nd level is nice and at 3rd level, when the lack of armor would start becoming a huge problem, the massive +8 armor bonus granted by ongoing petrification steps right in. Stability and deathwatch/detect evil as well as meld into stone at will are solid and 8th level is okay for disease immunity. Higher-level abilities include planar ally sphinx-calls, tremorsense and talking to the stones once per day – alas, again sans CL. Why not simply go SP, like the high-level statue ability that allows the monolith to weather the ages? The highest levels allow for the questioning of both the living and the dead, while the capstone renders them immortal.

The pdf comes with favored class options for the core races and the anpur-race (all solid – especially the human one, which grants limited rogue talents, is VERY interesting!) and the pdf comes with sample NPC builds at 1st, 5th, 10th and 15th level. Alas, the sample NPCs use the wrong HD – that ought to be d12, not d10. It’s not hard to adjust the bonus HP, though.

Beyond these, we get a slightly retooled shatterspike and stats for various pieces of mundane equipment – nice bonus!

Carl Cramér’s Living Monolith is EXACTLY what I’d like him to do in the series – take risks, expand the concepts of the PrCs, expand their focus and rewire them in an awesome way. The Living Monolith is, hands down, my favorite WPA in the series so far – it is inspired, fun and has a bunch of abilities that could be really nasty, all finetuned with relatively subtle balancing mechanisms. I really like both fluff and execution of the class and it is, hands down, the most inspired in the series so far. That being said, the CL-glitch is annoying indeed and, unless the DM makes a ruling for a limited duration, could be rather unbalanced. It is not a serious glitch, mind you, and any DM with a modicum of experience can make that call, but still – it constitutes a significant, game-impacting oversight. It also is the only reason I can’t rate this 5 stars + seal of approval. I really, really like the living monolith and I sincerely hope that Carl Cramér continues on this design-path, enhancing lame base PrCs with unique, cool options. As provided, for now, my final verdict will clock in at 4 stars!

You can get this nice Warrior Prestige Archetype here on OBS and here on d20pfsrd.com’s shop!