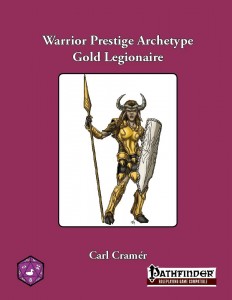 This pdf of the Warrior Prestige Archetype-series clocks in at 7 pages, 1 page front cover, 1 page editorial/introduction (explaining the base concept of the series), 1 page SRD, leaving us with 4 pages of content, so let’s take a look!

So, the golden legionnaire, based on the PrC of the same name and fighter/ranger – what does it get? Well, full BAB-progression, d12, 2+Int skills per level, full proficiency with all armors, shields and simple + martial weapons and good fort-saves. So far, so good. Gold legionnaires receive bonuses to saves against their choice of a large array of environmental hazards as well as against the SPs and SUs of a selected, creature type (subtypes included for humanoids/outsiders) – this bonus of +2 can be applied to an additional hazard-type at 4th level and every 4 levels thereafter. Alas, I do not understand why haunts are not listed among them – do they count as curses or traps or is this simply an omission?

2nd level legionnaires also receive a bonus equal to 1/2 class level to move through enemy squares via acrobatics and when executing Stand Still. At 3rd level, they decrease their armor check penalty (with a solid scaling mechanism) and they also receive a limited list of bonus feats at certain levels, thankfully with a caveat that allows for alternate selections, should the legionnaire already have them.

Things become interesting at 5th level – whenever the legionnaire sees a creature within 60 ft. attack an ally, he may designate said opponent as an adversary, receiving minor, but scaling bonuses to attack and damage-rolls. A total of 1/3 skill ranks in Diplomacy such foes can be maintained at a given time, rendering the ability pretty interesting, were it not for a guffaw – the ability does not specify what action-type designating an opponent is. I assume it is no action, since it requires activation on the enemy’s turn and the free action availability is muddy at best, but yeah. Worse, this also extends to AoE-attacks – can the golden legionnaire declare an enemy within range an adversary, when said adversary attacks without an attack roll? What about friendly fire of AoE-spells targeted at foes beyond the range of the ability, but still damaging allies in range? Yes, these are hard to determine cases, but the evidence remains – the ability could have used tighter wording. And yes, I am aware that the base PrC had exactly the same issue.

5th level golden legionnaires receive + cha-mod AoOs per round and 6th level characters may grant competence bonuses to atk, damage, saves and AC to allies up to 1/3 Intimidate skill ranks. This scales upwards analogue to the Diplomacy-based one and suffers from the same issues.

7th level legionnaires may designate adjacent allies and incur an AC-penalty to grant them an AC-bonus in a 1 for 2 ratio that also scales – nice. Better aid another, denying withdraw, denying AoO-negating tricks (but only once per day per opponent and once per round!), executing immediate AoO-retribution against foes attacking adjacent allies and rerolls complete the package.

The pdf comes with favored class options for the core races and the urisk. The wording here is slightly clunky in one case, but still unambiguous. The pdf also provides the statblocks for a sample character of levels 1, 5, 10 and 15.

Carl Cramér’s Gold Legionnaire once again suffers from the less than stellar base it is erected on- the Golden legionaire PrC simply isn’t good. It is solid and woefully bland, but that’s about it. That being said, the way in which some of these PrC-class-level-based abilities have been translated is pretty nice. A significant issue of the golden legionnaire, as opposed to other tank-y/commander-style classes, though, would be the fact that it’s pretty much all over the place. Full armor and Acrobatics without much help for the latter. Ridiculously low skills per level and multiple, skill-based abilities…not good combinations. Especially since Acrobatics isn’t even among the class skills! Additionally, the first 4 (!!!) levels utterly LACK any interesting things to do. You receive ONLY passive bonuses and less tricks than either fighter, or ranger. And no, no barbarian-like tricks. The first 4 levels of the WPA are utterly BOOORING.

No commands, no special tricks, nothing that would provide a compelling playing experience that sets it apart. Essentially, we receive a slightly tougher guy with slightly better saves and slightly better armor that still can’t stand up to the ranger in terms of versatility, or to the other martial classes in terms of choices/feats. When the ally-enhancers that make up the commander-aspect finally hit, they feel too linear – much like the crappy base PrC. And they inherit its wording-issues. This may not be a bad pdf, but when compared to the other Warrior Prestige Archetypes, it feels uninspired and worse, is boring and relatively inefficient for 4 full levels.

My final verdict will clock in at 2 stars.

You can get this installment of the series here on OBS and here on d20pfsrd.com’s shop!