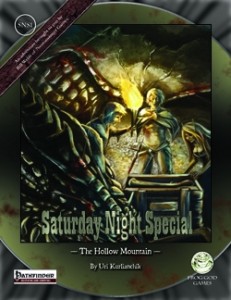 This pdf is 48 pages long, 1 page front cover, 1 page editorial, 1 page ToC, 3 pages of advertisements and 1 page SRD, leaving 41 pages of content for this adventure, so let’s check it out!

This being an adventure review, the following contains SPOILERS. Players might want to jump to the conclusion.

The Elves around the Hollow Mountain just aren’t what they used to be – in more than one sense. The  once peaceful nomadic wood elves have started raiding and killing humans and other humanoid creatures to convert them to the true nature – something that should give druids nightmares indeed: The elves have resurrected a strange cult that has them growing plant-like mutations like deadly spores and briars. It is these strange elves that now inhabit a forest of petrified mushrooms inside a hollow mountain and that make up the major opposition of the PCs.

Their fortress is inside one gigantic petrified mushroom and thus makes for a rather creepy backdrop for the dungeon crawl. The fortress of the elves is well-defended by their tainted nature, their massive capabilities and rather deadly allies (which includes a dragon as well as an awakened tiger who thinks he is a dragon). Have I mentioned the deadly war flowers?

Hopefully, the PCs manage to free the erstwhile druid of the tribe (now utterly mad) and  finally reach the hidden temple of the dread cult to reach a highly mutable plane where a deadly, aberrant nature provides terrible hindrances in the PCs final fight: The end the threat of the constant corruption of the nature, they will have to destroy a thing left behind from an aborted version of creation, an utterly disturbing tree-like monstrosity whose mere proximity mutates his foes.

The pdf closes by providing the complex reborn-template as well as a player handout.

Editing is top-notch, however, I noticed a major formatting glitch on the first map, starting room 20 to 26 there seems to be a discrepancy between the map numbers and room numbers, which is a bummer. Layout adheres to the b/w-2-column standard and the pdf is extensively bookmarked. We get 3 maps and the original b/w-artworks belong to the best you can imagine – especially the one-page picture of the final adversary is just plain awesome in its creepiness.

Indeed, an almost cthulhoid sense of wrongness pervades the whole module – author Uri Kurlianchik did an awesome job creating a truly disturbing dungeon crawl with interesting locations, smart foes, social interaction thrown in and an overall feeling of being unwelcome in this dark new world order. In fact, I consider this adventure to be quite deeply-entrenched in the horror-genre – if not for its narrative structure, then for the increasingly disturbing foes the PCs face and the furios final fight that truly deserves the name. However, a warning to players participating in this adventure – you probably will come out of this…changed. And some changes are hard to reverse… My final verdict will be 4 stars, as the map/room-discrepancy makes running a section of this adventure slightly more complicated than necessary.

Check this neat module out here!