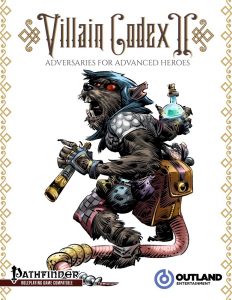 The second installment of the Villain Codex-series clocks in at 19 pages, 1 page front cover, 1 page editorial, 1 page of introduction, 1 page of SRD, leaving us with 15 pages of content, so let’s take a look!

We begin this pdf with Evetta Laxley, a changeling dreamweaver witch, running an inn as a front for her nefarious operations. Solid one. Ferracyr would be a metal elementalist wizard…but he actually is a venerable elf, which is an interesting twist on what you’d expect – and yes, the ancient pioneer has schemes to prolong his life in nasty ways…but may his mind perhaps even warrant it? Interesting angle!

Speaking of interesting: Nagasorko the Unblinking would e a nagaji mesmerist (a natural fit in concepts), his operations include raids on the nearby settlements and operating a diamond mine…and considering implanted suggestions etc., I can envision a complex escape scenario here…nice. Bimsen Malfilex, a tiefling skald raised by traveling musicians when the black-skinned child was expelled from his family, has sworn to bring the cultural elite down and make them see the error of their ways for flaunting him.

Rhikka Verminclaw, the ratfolk preservationist/vivisectionist featured on the cover is not only build-wise one of the most interesting characters in the series so far, her quest for vengeance after the holocaust of her family to “better the city”, she actually has very understandable motivations for her grisly handiwork… The halfling unchained summoner Julia “Foxglove” Apalla was once a greengrocer’s girl…until she inadvertently smashed a figurine in a wizard’s workshop, unleashing a powerful outsider, who promptly slew the wizard and became the eidolon (sparing her due to her apples – nice nod towards Death Note). It, and Ferrycyr’s shield guardian, btw., can be found in the book as well. Similarly, an alternate elemental form, a doppelganger simulacrum…pretty amazing supplemental statblocks here.

Professor Laeroth Rydel is an interesting occultist: First, he is a dhampir…secondly, he has unearthed the robes of famous necromancer Shaf-Ka-Sar and now behaves like the necromancer…is he possessed, has he gone off the deep end…or was he always waiting to snap? The GM decides. Gordakash Saltenclaw would be a cleric of Dagon, a dwarf in league with the clawed forces of the deep. Lucretia Tropin, a famous investigator who dresses the part, is amazing, for she, in fact, doubles as a serial killer – seriously cool angle for a battle of wits!

Rayri Shaden is an interesting twist on the shadowdancer – he actually is a fighter/shadowdancer multiclass, complete with heavy armor! Nice twist here! Madison Grand, an old elven psychic of considerable power, has plotted the downfall of the elves that exiled her.

And here is a unique adversary: Hanne Bullard is an oathbound paladin. No, not antipaladin. A paladin.She has instigated martial law to uphold civilization and order – and her measures are a slippery slope, well-intentioned though they may be.

Editing and formatting are top-notch, I noticed no glaring glitches. Layout adheres to a printer-friendly two-column b/w-standard and the pdf features a great b/w-artwork for each of the adversaries herein. The pdf comes fully bookmarked for your convenience.

Phoebe Harris, Steve Johnson, Mikko Kallio, D.L. Loutzenhiser, Luis Loza, James McTeague, Matt Morris, Rep Pickard, Stephen Stack, Robert Thomson, Christopher Wasko and Nicholas Wasko, with development by Mikko Kallio and Jacob W. Michaels, have delivered a cool collection of adversaries here. The respective villains certainly are high concept and interesting, with my favorites being the ratfolk alchemist as well as the investigator – but as a whole, each of the villains has something cool going on and build-wise, they are pretty neat as well. In the end, this pdf leaves not much to be desired and thus clocks in at a final verdict of 5 stars.

You can get these adversaries here on OBS!
Endzeitgeist out.